Read on for Simon Cavanagh’s report of the Future London Leaders visit to the Olympic park on 28 October:

“It’s Friday afternoon in late October and I am being driven around the Olympic site with my Future London Leaders colleagues. The experience is strangely akin to the first act of Jurassic Park. Every couple of minutes brings a preview of the wonders to come on this reclaimed piece of East London and all we want to do is leave the mini-van and explore. But there is still work to be done and the contractors will probably bite, so we stay seated.

It’s the scale of the site that hits you first – the gigantic venues recede to almost nothing depending on where you are in the park. I wasn’t prepared for how wild and intimate the spaces between the venues are. Once the two week sports day has ended and the world has left Stratford, London has a new playground, or the Queen Elizabeth Park to give it its regal name. With Victoria Park just next door, I would have preferred Dizzie Rascaland – but that’s a minor quibble. 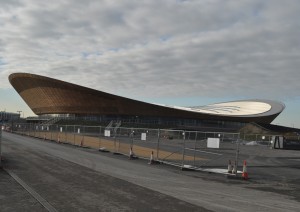 The venues are truly world class – the Olympic Stadium tricked out with spired lighting rigs to capture the athletics events in glorious HD. The Aquatic Centre – a gigantic Manta Ray, though muted by its temporary seating. However, it’s the Velodrome that is the true star of the park. Framed by the widescreen horizons of Waltham Forest in the far north of the park, the building’s roof is an elegant curve of wood and glass that will have every skateboarder in London making plans to scale its walls.

However, the Olympics is just stage five of a six stage plan for this site. From 2013, it will become London’s newest park – a leisure park to rival the South Bank with a beacon designed by Anish Kapoor and a new home for the wildlife and families of East London across five new neighbourhoods, with names like Sweetwater and Pudding Mill. Hopefully there will be less need for our urban foxes to roam the bedrooms of Hackney.

For anyone that watched BBC television’s Twenty Twelve earlier this year, the biggest joke was reserved for Legacy – every attempt to define the park’s future use was met with stream of conscious babble from a harassed tree hugger. In reality, the legacy looks joyous. The banks of the River Lea have been widened into gentle slopes. The new roads, bridges and tunnels, 30 in all, will allow Londoners to connect with a new piece of London in a way that wasn’t possible in its Industrial days.

The East End has a shopping centre in Westfield Stratford City that rivals anything in Europe, but doesn’t challenge the independent businesses that have sprouted up in Hackney over the last decades. I doubt the shopkeepers in Columbia Road or even Roman Road are too concerned for their future – but we will no doubt return to the Olympics’ impact on the East End for many decades to come.

Whatever happens next July, Londoners can rest easy that we have already taken the gold in Regeneration. A new piece of London indeed.”