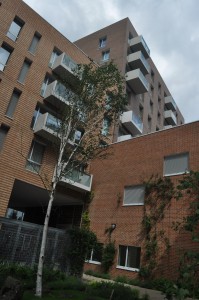 Future of London organised a visit to the St Andrews housing development in Bromley-By-Bow, LB Tower Hamlets. Sited on the former grounds of a Victorian hospital, this all new-build scheme will provide 964 homes, of which 50 per cent will be affordable, plus PCT, community facilities and extensive public realm improvements. When we visited, the fourth of five phases was almost complete.

Phases one to three are separate courtyard blocks, each of which has been designed by a different architect: Allies and Morrison, Maccreanor Lavington and Glen Howells all designed one. While the detailing is more successful on some than others, they all show a genuine concern for good design, from the aesthetics of the brick work and balcony design, to the ‘people-friendly’ pedestrian only streets and courtyard gardens. The whole site runs a district heating system using Combined Heat and Power (CHP), a major part of the scheme’s sustainability credentials.

We didn’t get to see inside any units, as the majority are inhabited, but the overall impression was that the St Andrews development has created a pleasant place to live, despite its high density. The scheme has won a number of design awards, and hopefully sets a precedent for similar schemes.

See below for the presentation from the day, plus a selection of photos.