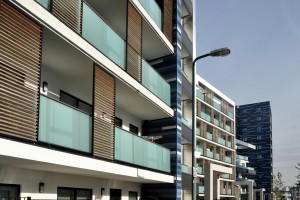 In the latest event of the fourth round of Future London Leaders, candidates met at the South Kilburn estate in LB Brent for a site visit and policy discussion. The estate is the focus of a regeneration programme that began in 2009 and is expected to continue for 15 years.

The morning began at the Community Resource Centre, where Abigail Stratford (Programme Manager South Kilburn, LB Brent) and Jacqueline Clarke (Chief Executive, South Kilburn Neighbourhood Trust) outlined regeneration strategies that each organisation employs. The borough-led regeneration scheme has LB Brent, in some respects, acting as lead developer, as well as landowner and planning authority. They are able to capture value in the programme by disposing of sites, and re-investing the capital receipts back into their scheme, which are ring-fenced for this purpose. Design quality is central to the council’s vision for the area, reflected in the most recent housing development, in partnership with L&Q, where they remained involved in the design to stage D+.. The scheme will deliver 2,400 homes, of which 1,500 will be for existing estate tenants. In addition to tackling the worst homes first, the scheme also focuses first on the edges of the estate in order to change the perception of the area.

We were then taken on a tour through a portion of the estate. The first stop was the Albert, the scheme’s newest meanwhile space, on which construction is due to start in six months. Until then, the ex-Royal British Legion building will be used to tackle health and well-being challenges faced by many of the estate’s residents, in addition to the value it brings from attracting people from nearby communities. We then visited two high-spec L&Q developments on the estate: the first development complete and on the north end, where they viewed a two-bed flat; the second development under construction and near the estate’s border with Westminster, where we viewed a three-bed flat. The tour concluded at South Kilburn Studios, the estate’s successful meanwhile project that makes workspace available to creative entrepreneurs and enables 26 creative traineeships for young people.

After exploring the site, the group gathered at South Kilburn Studios with Abigail and Jacqueline to address some broad questions stemming from the area’s regeneration experiences so far, and to reflect on how it relates to their own work.  Among the issues explored in the discussion were:

The first photograph below is of The Albert, a meanwhile space currently being established, followed by some other photographs from the site visit. 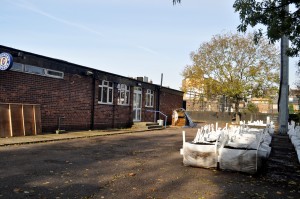 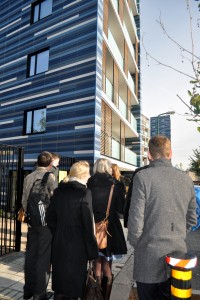 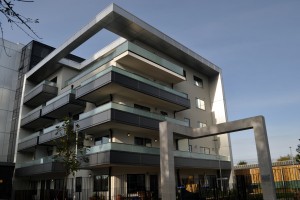 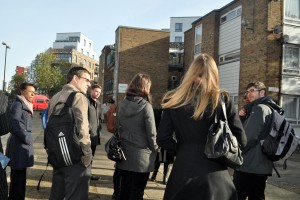