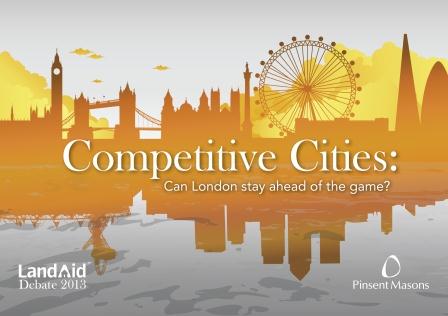 Last night, I attended the property industry’s charity LandAid’s annual debate in London’s City Hall, which was called: “Competitive Cities: can London stay ahead of the game?”.

Each panelist brought their own perspective, though a common consensus was that London needed to retain investment as the engine driving much of the rest of the UK’s economy (and into Western Europe). The city is increasingly a fact of life for people around the world; at the turn of the twentieth century, around 10% of all people lived in cities. It has been forecast that by 2050, it could be 75%.

The growth of cities is mostly occurring in the developing world; particularly China, where tens of new cities pass the one million inhabitants mark on an increasingly regular basis, but also in Africa and the Middle East. The biggest question of the night was essentially: how is London best placed to remain competitive in a world with many new rivals arriving on stage?

Another consensus was that while it would be a mistake for all cities to follow the same template, there were lessons to be learned. Different cities around the world have evolved very differently: Mexico City’s 22 million citizens are widely dispersed, with average commuting times of about four hours, while Hong Kong has a highly dense population and commuting times on average about 11 minutes. Linking this back to London, the audience were asked to vote on whether London should spread into the greenbelt or build on existing land with higher density. Surprisingly enough, the audience voted for higher density on existing land and to retain the full extent of the greenbelt.

The rest of the discussion covered a number of issues in the public eye, including:

All in all, the general view was cautiously optimistic for the future of the Capital. The 21st Century is set to see new and existing competing cities rise to greater prominence on the world stage, but London remains in a strong position for growth and inward investment.