On 19 March, we held the first of our three ‘London’s Transport Network: Adaptation and Evolution Series’ events. The event, entitled ‘Adapting to Changing Demographics’, was held in partnership with Transport for London. We brought together a deliberately varied range of actors from within both London’s transport industry and related industries. By cultivating a diverse audience for the participatory session, we hoped to breakdown silo-thinking and build connections for people beyond their immediate field. This will be essential if London is to effectively meet the transport demands of its future population growth. 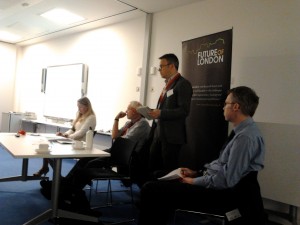 The meeting was chaired by Lucinda Turner of TFL. The first speaker, John Lett, Strategic Planning Manager at the Greater London Authority, presented a series of sobering statistics and graphs outlining the rising population projections, the increasing birth rate and changing age demographics. As these new projections were greater than previously envisaged, he admitted the London Plan and the soon-to-be published Mayor’s 2020 Vision for London document would have to be amended to reflect this. He then explored the resultant demands on the housing, transport and environmental sectors, in addition to the existing ones. He mooted changes to future working habits, whether the need for industry in a post-industrial city was necessary and the removal of barriers to delivering housing. As ever, innovative solutions are needed.

The second speaker, James Goodman of Forum for the Future, started off by acknowledging the uncertainty of future projections, using unexpected events like the dot.com boom and the current recession as examples. Taking the theme of the unexpected further, he raised potential issues in rising food and commodity prices, energy mixes and the feasibility of current global trade. How will these issues impact the behaviour of the economy in London and the attendant demand for land?

Giving the transport planning perspective, Simon Nielsen of Transport for London summarised that although trips per person per day are stable, increasing population will result in an increased demand that is increasingly difficult to plan for and meet, especially with funding difficulties. The location of funding inevitably guides the geography of infrastructure provision.

The participants then broke off into four separate groups to discuss an agenda around the benefits and challenges in planning proactively for future change. The discussions and responses reflected the need for better awareness of how changes in demographics will affect the demand for specific services and the transport needs involved. There was agreement that different issues are so complexly interrelated that there would be no panacea, especially in light of the budgetary constraints. However, there was consensus that the big issues, such as the Green Belt, acceptable densities and the sustainability of funding for housing, need political response to enable stability and effect action. Suggested softer solutions included manipulating people’s work habits and strategic rail travel charges. Through discussion with varied participants, we developed an appreciation for the broad spectrum of issues to consider when planning for the future.

The presentations from speakers John Lett and Simon Nielsen are available below.