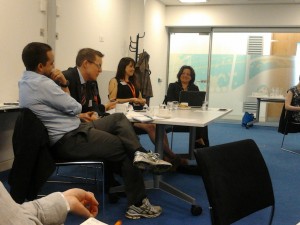 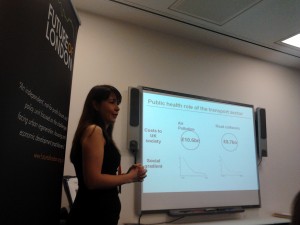 On 16 April, Future of London held our second event in the ‘London’s Transport Network: Adaptation and Evolution Series’. ‘Challenging Travel Behaviours’ was offered in partnership with Transport for London. The event drew a good mix of practitioners from across the public-sector delivery spectrum and was chaired by Elaine Seagriff, TfL Head of London Wide Policy and Strategy.

The first speaker was TfL’s Director of Planning (Surface Transport), Ben Plowden. Using broad examples, from smoking to Olympics traffic, he spoke animatedly on policy strategies involved in changing behaviour. Although changing behaviours is difficult, it is not impossible. First, a desirable behaviour should be established, such as cycling as viable transport alternative. Second, explore a range of political responses including hard (i.e. physical; monetary) or soft (i.e. marketing, campaigning); and positive or negative. Third, interventions need to have long-term commitment, as societal change takes years to achieve. Finally, interventions have more chance of succeeding when removed from of party politics.

The second speaker was Lucy Saunders, a Public Health Specialist working with the GLA and TfL, whose role is partly to highlight transport’s impact on public health. Public health is now the responsibility of local authorities, with performance measured against 68 indicators from the Public Health Outcomes Framework. The connection is not immediately obvious – road collisions and air pollution only account for 2 out of 68 indicators. However, when public inactivity is included, transport and street environment are related to 40 out of 68 indicators. The cumulative cost to UK society of these three factors is £29.1bn. There is therefore a strong financial and lifestyle incentive to changing travel behaviours.

The final speaker, German Dector-Vega, London Director of Sustrans, started with a humorous film about the difficulties faced when cycling in London. The film led into how to get a community to embrace change. First, the infrastructure has to be in place. In German’s experience, working with local champions leads to a higher uptake on behavioural change. Also, communities often get engaged around a single issue. Associating the habit change with such an issue can lead to greater response to engagement. The participants then broke into groups to explore (1) the deciding factors in personal transport use and potential interventions; and (2) how urban form can shape travel behaviour.

Overall, there was no singular factor that dominated travel behaviour, though convenience and safety rated highly. The need to intervene spatially led to multiple, smaller interventions being suggested. These included consolidating inner London van deliveries (similar to the Regent Street project which reduced traffic by consolidating retail deliveries). Other proposals included restricting parking spaces, creating more segregated bike/pedestrian routes where possible and incentivising walking and cycling via a points-based system.

Regarding urban form, it was felt that a polycentric model for London, whilst desirable, would be difficult to achieve given the important role of central London in the city’s employment patterns. However, as ease and variety of transport options are drivers for location choice, more public transit options beyond the dominant radial system could have a major impact in decentralising some travel behaviours.

Our third Transport Series event, ‘Shaping London’s Transport Network’ will be on 22 May. To register interest in attending, please get in touch at events@futureoflondon.org.uk.