Future of London hosted a research seminar on 9 April 2013, as part of our on-going research on the use and viability of the Affordable Rent Model (ARM) for delivering affordable housing in London. This event was both an opportunity to stay informed on early findings and to contribute to the research. 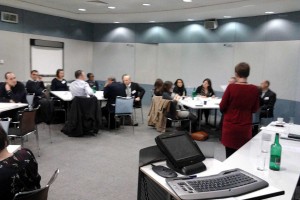 Research lead Andrew Heywood began by sharing early findings and key questions that have emerged from the research thus far. The 58 organisations delivering under the ARM programme in London are in line with the GLA target number of participating organisations outlined in the Revised London Housing Strategy. In terms of affordable rent as a percentage of market rent, levels varied widely across providers, with an overall average of 64.7% (providers can charge up to 80% of market rent under ARM).

Early data also suggests that while ARM conversions in the first three quarters of 2012-13 are more than five times the number achieved in the previous year, there may be fewer new homes completed under the scheme this year than in 2011-12.

Andrew was joined by three affordable housing professionals who responded to some of the early findings. Mairéad Carroll, Head of Policy and External Affairs at East Thames Group, said housing association (HA) participation in ARM was given, as it was ‘’the only game in town’’, and that ARM’s housing of similar types of tenants compared to social rent was unsurprising given a reliance on local authority nominations.

Looking ahead, Kevin Williamson – Assistant Director for London, South East and East at National Housing Federation – highlighted the impact of welfare reform on HA’s operations, along with the recognised need for on-going capital investment, particularly in the face of under-building that will serve to exasperate the affordable housing issue.

Providing a perspective from a London borough was Ken Jones, Divisional Director of Housing Strategy, London Borough of Barking & Dagenham. With a little ingenuity, his local authority was able to utilise the ARM product to help deliver a 900-unit scheme.

The break-out discussion that followed was fuelled by the diverse experiences of the event attendees on two key questions:
• Can ARM deliver affordable housing in the current financial environment?
• Thinking ahead to the next Comprehensive Spending Review, what should a delivery model for affordable housing in London look like?

At present, the ARM model is deliverable given that statistics show that first lets and conversions are becoming available, although it will not be clear before September 2013 whether programme targets will be met. Most of the group expect a one-year extension of ARM in the 2015/16 CSR, which may assist in meeting targets. Beyond this, there was some shared speculation about the longer-term viability of HA delivery under this scheme, given depleting equity and increasing lending risk, coupled with the position of many HAs whose business models are not reliant on new development for organisational sustainability.

Taken together, the concerns of event attendees suggest two key questions related to ARM: can the model – with its higher rent levels – deliver affordable housing, particularly in the face of benefit caps and direct payment; and, in a time of declining grant and a tough financial climate, will ARM support delivery capacity in the longer-term?

Thinking beyond the next CSR, ideas drawn from the experiences of event attendees began to emerge. Diverse portfolios including market rent, shared ownership and low-cost home ownership may be part of a viable option for HAs with the resources to deliver these programmes, while inter-organisation collaboration across HAs of different sizes may be another way forward. Similarly, the varying assets of London boroughs – particularly between Inner and Outer London – implies the need for a spectrum of models. London-wide, maximising the potential of land assets offers more potential: options include more powers to secure land with CPOs, a mansion tax, and local retention of stamp duty.

This discussion will continue on 30 April, when Future of London hosts its final ARM research seminar. This session will focus on what a suitable affordable housing programme beyond 2015/16 ought to be. RSVPs are required and space is limited. To register interest in attending, please get in touch at events@futureoflondon.org.uk. The final report is expected in Summer 2013.

The presentation from the event is available below.

This research project is supported by the Oak Foundation.