On 22 May, Future of London held our third and final event in our ‘London’s Transport Network: Adaptation and Evolution’ series, held in partnership with Transport for London (TFL).

‘Shaping London’s Transport Network’ centered on the ongoing work of the Mayor of London’s Roads Task Force (RTF). Roads are a central element of London’s transport system, and are the focus of the first major review in a generation by the RTF, whose findings are expected in July 2013. This event drew a broad range of practitioners to discuss some of the opportunities and challenges presented by roads and their surrounding urban realm. 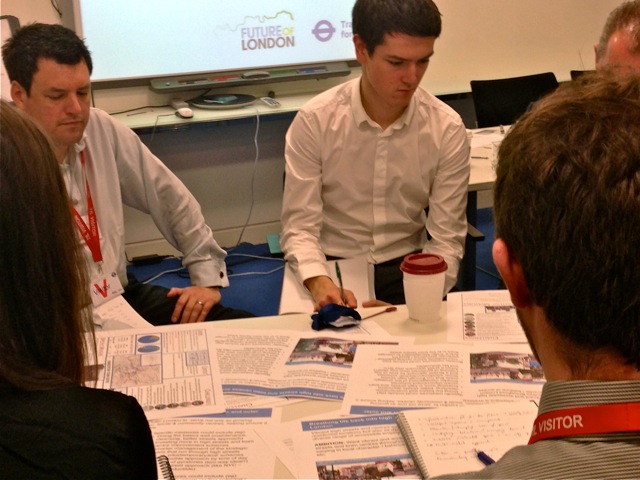 The first speaker was TfL Principal Policy Advisor Edward Rhys-Thomas, who outlined the challenges facing London’s roads, foot and cycle paths.  Rhys-Thomas was involved with RTF, which looks at how TfL and the London Boroughs can balance the different demands on London’s road network in the face of higher-than-expected population growth and continued underinvestment. Whilst Rhys-Thomas praised the Mayor’s Transport Strategy, he argued that more needed to be done.  He summarised the six challenges facing the RTF (below) which paint a picture of the spatial response and scale of funding required:

John Dales, Director of transport consultancy Urban Movement, then focused on solutions instead of challenges by asking “What do we actually want?” Using the example of his own high street, what he wanted depended on what he was doing there.  This highlighted the complex mélange of often competing qualities which we demand from our urban streets.  These qualities are wide-ranging, from accessible and safe to attractive and diverse.

Dale identified that reducing the volume of traffic would leave space for more qualities to be accommodated.  According to National Traffic Statistics, in 2011 57% of trips under 5 miles were made by private vehicle or public transport.  A good proportion of these journeys could easily be done by foot or cycle, contributing to the conviviality and safety of streetscapes.  Dales praised the Mayor’s Vision for Cycling in London for promoting cycling in London, along with TfL’s Urban Design Kit for helping to create streets people wanted to be in.  However despite this progress, Dales argued that more needs to be done.

At this point, the group discussed the impact of projected population growth on transport.  The point was made that population growth does not necessarily mean a proportional increase in private vehicles.  In fact, there is some evidence from previous projections to suggest that anticipated increases in private vehicle have not been fully realised. Doomsday projections, therefore, needed to be more considered.

The final speaker was Peter Jones, UCL Professor and advisor on the RTF, who reiterated that roads were not only about movement.  It was also in London’s interests as a world class city to have a world class street realm and cycle network.  However, London’s diverse geography, economic flows and social needs mean that it cannot be treated as a sole entity with regard to solutions. As a guideline, Jones explained the nine different types of streets/realms used by the RTF, based on the differing importance of movement and place.  Each of these types requires tailored responses.  The potential tools the RTF have include:

Using all that the speakers had brought forth and with their own experience, the participants then broke into groups to explore how they would solve real problems in three London problem spots.  In light of the focus on spatial thinking, the benefit of this group exercise and the others in our Transport Series has been the diversity of participants.  We hope all of them are able to take the ideas and information shared during the series on into their practices.

Future of London will be publishing an anthology of our London’s Transport Network: Adaptation and Evolution series. This paper is expected in Summer 2013.

The presentations from the speakers can be viewed below: