London 2012 promised both a successful global sporting event and a regeneration legacy spreading from its Stratford epicentre across London. The Games themselves were rightly seen as an international triumph; the long-term judgement will be based on how well they fulfil their promise to create new communities in East London, and on the wider benefits to the rest of the capital in terms of housing, transport infrastructure and commercial investment.

Future of London’s July 11th Living Legacies session, sponsored by Lewis Silkin and held at Base London, was chaired by David Lunts, GLA Executive Director for Housing and Land, and led by Neale Coleman CBE, the Mayor of London’s Advisor on Olympic and Paralympic Legacy, with responses from Cllr Karen Alcock, Hackney Cabinet Member for Housing and Chair of the East London Housing Partnership, and Lara Kinneir, Director of CASS Urban Research Projects.

Coleman has been involved with London 2012 since the first days of the bid in 2003. He chaired the Olympic Masterplan Reference Group and is deputy chair of the London Legacy Development Corporation. The LLDC’s vision is:

These are the aims against which the efforts of the LLDC, the ‘Olympic’ boroughs (Hackney, Waltham Forest, Newham, Tower Hamlets and Greenwich) as well as developers and other change agents – including community groups, if they are fully involved – will be measured over time. In his presentation (Park, Place, People, available to download below), Coleman gave an overview of all aspects of Olympic legacy to date, and the news is good.

So far, all eight permanent Games venues have been committed, commercial investment in the area has been strong and sustained, and there are plans for up to 7,000 homes in five new ‘full-service’ neighbourhoods, in addition to the public realm provided by the gradually reopening Park. The LLDC programme is also surpassing its own targets for local and minority employment to date.

Finally, transport connectivity is set to improve in tandem with the phased development of residential, community and business zones across the area. [Shortly after this session, Transport for London released its Olympic legacy report, with a view to learning from its London 2012 successes and to maximising transport and regeneration potential in (and beyond) East London. Watch for an anthology of TfL/Future of London sessions on evolution and adaptation soon.]

From her point of view as a long-time councillor in a historically deprived borough, Alcock lauded the “magic dust” effect of the Olympics, reminding the audience that “no one would do business with [Hackney] in 2002.” After such a major turn of events, she and her borough are focused on three main goals for the Park and adjacent areas: employment; quality and integrity of neighbourhood; and affordability and mix of housing.

With her Hackney and Housing Partnership experience, Alcock said she likes what she’s seen of plans so far, saying “the mix is right,” but wants to see continued focus on affordability – difficult given the pressures of the current Affordable Rent regime and the fast-rising values in the area – as well as communities with practical services where people want to put down roots and stay. 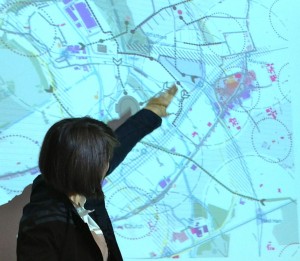 Kinneir also applauded much of the regeneration plan, while calling for meaningful integration with surrounding neighbourhoods, and for recognition/action on the ethnic mix and industrial heritage of the area. She acknowledged that public consultation can be difficult, but urged the LLDC and developers to keep involving residents in the interest of a functional network of neighbourhoods. Her presentation is in the link below with Neale Coleman’s.

Finally, as a companion piece to the 3-2-1 session, we contributed an article to Baselines London, comparing Montreal’s 1976 Olympic legacy to London 2012. No surprise which city comes out on top, but there are one or two parallels worth considering before dismissing Montreal’s “Big Owe” as a series of disappointments we could never repeat. The magazine is available to download here; the article starts on p. 34.

This event was kindly sponsored by: