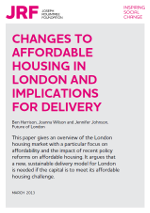 It’s been just over six months since the Joseph Rowntree Foundation published our report Changes to Affordable Housing in London and Implications for Delivery. In that time, there have been many developments that continue to shape the city’s housing landscape.

It’s early days to gauge the ‘concrete’ impacts of recent housing initiatives by the Coalition Government, from Help to Buy – are we risking a housing bubble to get first-time buyers on the property ladder? – to the introduction of permitted development rights for office-to-residential conversions, from which 11 London boroughs have secured exemptions.

We’re starting to have a clearer idea of what’s being delivered under the Affordable Rent Model (see our June 2013 report), but the viability of ARM as a long-term solution for delivering affordable housing across the Capital is still hotly contested. Perhaps nowhere was this better illustrated than in September at the London Assembly, when the Mayor’s plan to prevent boroughs from setting their own percentage-based rate caps below what’s permitted under ARM passed only by a narrow margin.

Our report for JRF began by reviewing the Capital’s housing market, highlighting supply, affordability and acute need as particular challenges for London – especially in the context of the Coalition Government’s housing reforms. As we previously posted, statistics show that acute housing need has worsened when compared to the earlier data used in our report. Updated information is also available that paints a picture of London’s housing [un]affordability.

Land registry data (easily digested through this BBC tool) shows that the average house price in Greater London through 2013 Q2 was £475,940, an annual increase of 3.9% and a continuation of the upward trend in London’s house prices over recent years. Wide disparity in house prices across the Capital also continued to be a theme, as RB Kensington & Chelsea remains in the top spot with an average sales price of £1,586,426 while the average home in LB Barking & Dagenham was London’s lowest priced at £185,460.

Average prices increased in 28 of the 33 boroughs over that year (Q2-Q2 2012-13), from a high of 49.3% in the City of London to a low in LB Hillingdon, where the average house price decreased by 6% from the same quarter in 2012. Even as these upward prices bar access for many aspiring homeowners, first-time homebuyers are also feeling the crunch, as the size of their mortgage payments rose slightly to 51.8% of mean take-home pay through 2012 Q4 (Nationwide).

The cost of private renting has also continued to rise across the Capital. In 22 of the 33 London boroughs, median private-sector rents are at or above £1,000 per month, compared to 19 boroughs at time of our JRF report publication; in the 11 remaining boroughs, average rents are now between £825 and £950 (see Table 701).

These rising prices in both elements of the private residential sector – home ownership and private renting – will continue to garner political attention, particularly in the lead-up to the next election. Housing affordability in the Capital will also keep grabbing newspaper headlines, inviting perspectives on a whole suite of related issues from planning obligations to overseas buyers, and from Generation Rent to the future of the Affordable Rent Model. We at Future of London will be focusing on many of these housing affordability challenges over the next year.