The 2003 Local Government Act introduced Business Improvement Districts to the UK, adopting a well-established practice from North America, where they have been used since the 1960s. BIDs have flourished in the UK, with over 200 nationwide – 36 of which are based in the Capital.

BIDs come in all shapes and sizes, from multi-million pound West End groups to outer London industrial estates. It is a flexible model with a common trait: they give businesses a voice in shaping commercial and retail centres, and a means through which to carry out improvements which provide a better environment to work, shop, and do business.

BIDs are often set up with the help of the relevant borough, and local authorities can have a key role to play in enabling the success of local BIDs. These partnerships have become even more relevant as councils face pressure to reduce budgets, as BIDs can offer a way for local businesses to contribute to maintaining a high quality environment on high streets and in business and commercial districts.

“Working with BIDs” was the topic of Future of London’s third Breakfast Bites seminar on 12 November 2013. The event was kindly hosted by Lewis Silkin, who have also produced a short guide to BIDs. In this enlightening session an experienced panel discussed the secrets of success for BIDs, what role local authorities can play, alternative vehicles for businesses to contribute to local areas, and how BIDs might develop in the future.

Bev Stratton, Town Centres & BIDs Manager at LB Redbridge, said that although establishing BIDs was time- and resource-intensive for the council, they would continue to support the creation of new BIDs as the benefits were obvious; she lauded BIDs as, “local businesses finding local solutions to local problems.” Redbridge provides start-up funding for BIDs and guides interested parties through the process of setting up the necessary governance structures.

Business Improvement Districts also provide a means for LAs and businesses to engage in productive dialogue and work together. Ted Inman OBE, Chief Executive of the South Bank Employers’ Group (which is not a BID, but a voluntary organisation), noted that often a “catalyst” is needed to spark this kind of engagement, and that BIDs are a good way of providing impetus for different groups and agencies to work together to solve common issues such as litter, waste, and crime.

All speakers agreed that good relations between local authorities and local businesses were mutually beneficial. Successful BIDs are able to deliver value not only to member businesses but also to authorities by organising public realm improvements and securing additional funding from national and EU bodies.

In addition to boroughs’ statutory role in supporting BID creation, the Greater London Authority is keen to support BIDs in the Capital, seeing them as a positive force for economic development. The GLA has set up a BID steering group, is providing grant funding to set up BIDs, and organises regular meetings, a newsletter and workshops.

Camden Town Unlimited is already showcasing some of the other areas in which BIDs might prove to be influential. The North London BID has been promoting economic development in Camden through setting up pop-up shops, creative hubs, business incubators and accelerators (through Camden Collective). CTU is soon to start offering coding classes to Camden residents and school-leavers to boost IT skills and provide a bridge into working with local tech companies. 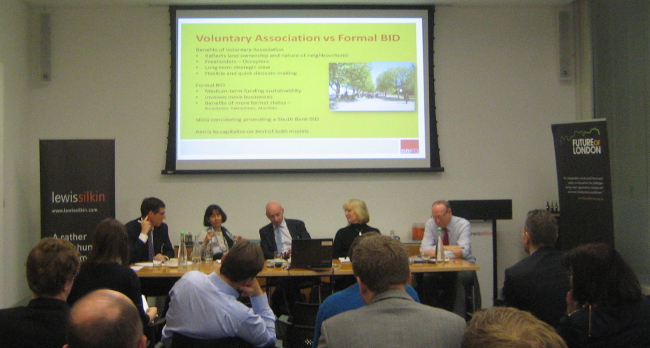 Simon Pitkeathley, CEO of Camden Town Unlimited, said he would like to see BIDs follow the North American BID model more closely and “take ownership” of their areas, becoming even more involved.

South Bank Employers’ Group is also looking to take on more ambitious projects in the future, including capital works programmes to improve highways infrastructure. The Group is also considering supporting the creation of a BID in the area to secure involvement and financial support from business occupiers.

Be it BIDs or voluntary groups, the panellists agreed that it is increasingly important for the public sector to engage with business-led organisations in delivering everything from SME support to public realm improvements. This call includes London boroughs, but also extends to other public organisations. Housing association colleagues in the audience echoed this, expressing interest in engaging with all facets of community in areas where they work.

There’s no doubt we will continue to see development and innovation in this area, with BIDs keen to take on greater responsibilities and local authorities keen to find willing partners to help maintain high streets and business districts as decent places to visit, work and shop.

The seminar speakers were:

The session was chaired by Mike Fairmaner, Economic Policy and Area Programme Manager, City of Westminster.

This event was kindly hosted by: