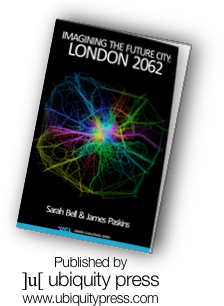 Last week, we participated in the launch of Imagining the Future City: London 2062, a cross-sector anthology that approaches the question of London’s future. The book is the culmination of Future of London’s work on the London 2062 programme headed by UCL’s Grand Challenge on Sustainable Cities.

In Spring 2012, we partnered with UCL to facilitate a programme of events around the project, looking at the challenges facing London’s future development in relation to housing, energy, transport and the economy. We brought together a range of leading academics and practitioners to discuss and debate the actions we need to take to ensure the delivery of a sustainable future for our Capital City.

Many practitioners from our network contributed to this anthology, including three of our Future London Leaders alumni: Simon Cavanagh, Hannah Dalgleish and Michelle Hegarty. Future of London’s Jo Wilson and Jennifer Johnson contributed to the foreword; in that capacity, FoL joined the speaker line-up at the book’s launch to discuss why London 2062 is an important piece for the Capital.

In some respects, practitioners and policy makers already live in a future-thinking world. They are creating, and working within, plans that shape our future city. At the city-scale alone, a complex package of strategies shapes the Mayor of London’s vision for London’s future, largely operating at different timescales and with intersecting remits.

Looking across scales, from international commitments, to national policy, to local plans and to community-led initiatives, it may be hard to grasp why another visioning exercise is valuable.

Future thinking may also seem trite in light of the pressing concerns of today. Practitioners are grappling with growth on an unprecedented scale. The recent upward revision of London’s 2031 population to 10 million has shown the precariousness of the very projections many of our plans find their grounding in. The implications are wide reaching: from a need for 36,000 net new homes a year, when we’ve averaged under 25,000 annually between 2007-12; to 2.1 million more daily trips on our transit network, a key reason Crossrail 2 has been expedited; and to a school place shortage of 118,000 as soon as 2016.

It’s not just about quantity; delivery and policy are also concerned with quality. Environmental sustainability is high on the agenda across stakeholders, including for the Mayor of London, who has pledged to reduce CO2 emissions by 60% by 2025. Affordability, community engagement, segregation, and accessibility are all also amongst the quality priorities on the table.

As we say in the foreword, the real challenge isn’t in fulfilling either these quality ambitions, or in providing the services and infrastructure to underpin the booming population; the fundamental challenge is in balancing growth and quality – especially when they’re often in seeming competition with each other.

For those who doubt the value of freeing ourselves of projections and of today’s challenges in considering London 2062, it’s enlightening to consider what was possible in the 50 years from 1962 to 2012.

In those 50 years, the wider context shifted substantially, from a new global cities discourse to the founding of the European Union (1993). In other ways, there was both change and consistency: there were 13 United Kingdom general elections, resulting in power being handed back and forth six times between the same two parties.

The city itself underwent a fundamental transformation under the London Government Act 1963, which merged boroughs and districts to create the 32 boroughs and City of London that we know as the Capital’s geography today. We also realised the results of careful planning, including the installation of key transport infrastructure that has underpinned development in the Capital: the Victoria Line (1968), the Jubilee Line (1979), Docklands Light Railway (1987), and London Overground (2007).

Not all has gone as expected since 1962. A substantial drop and rebound in London’s population has surprised demographers and practitioners alike. And all around us are footprints in London’s urban form of decisions taken (or not taken). In some of these legacies we can see where longevity has failed. As we regenerate major estates built three, four or five decades ago, there are opportunities to learn from experience.

Maybe London in 2062 will be a city remarkably similar to today’s Capital; maybe it will be transformed by thoughtful intervention; or maybe it will be completely turned on its head by the unexpected. The true utility of this programme isn’t necessarily in defining what we believe, or hope, London will be in 50 years.

In part, the value of London 2062 is about shaping the journey – the actual answer to what the city will be, or should be, in 2062 is less important than how we get there from here. The question frees us to explore alternative paths, and the corresponding interventions, with clarity.

The intrinsic uncertainty in future thinking means that building capacity to adapt and respond is more important than ever. Practitioners need to come together to share best practice, and to invest in the next generation of sector leaders.

Lastly, academics and practitioners have common ground in the interdisciplinary value of the programme. The opportunities to think across departments, across sectors, and across remits can be rare. So-called silo busting is a vital component to developing innovative thinking – something that FoL tries to build into all our programmes.

Imagining the Future City: London 2062 is available for purchase from Amazon. A Creative Commons PDF is also available from the book’s publisher, Ubiquity Press. The book has been covered by the Evening Standard.

Jennifer’s presentation from the launch of Imagining the Future City: London 2062 is available below.