To mark the second anniversary of the 2011 Localism Act, Future of London has been examining its impact across the Capital. Previous articles checked in on neighbourhood planning and Mayoral Development Corporations – this post will assess the impact of Housing Revenue Account reform introduced through the Act.

Our 2012 survey showed that HRA reform was the measure which practitioners thought would be the most useful (coming just ahead of the Community Infrastructure Levy) – see the graph below. 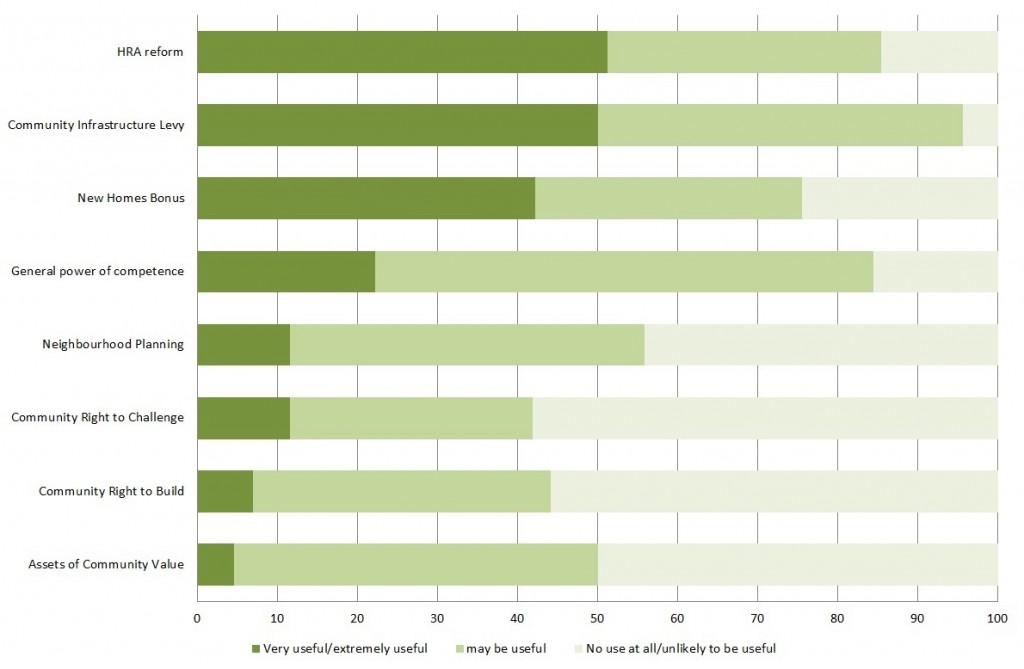 Over 50% of respondents said that HRA reform would be “very/extremely useful”, with 34% seeing it as possibly useful. Only 15% thought that it would make little or no difference.

HRA reforms came into effect in April 2012 – councils were transferred full control over housing stock in their locality – along with its existing debt – from central government. The income gained from rents was ring-fenced for housing and a cap was placed on the amount of additional debt local authorities could take on to build new housing.

A July 2013 report [PDF] from PwC and the Smith Institute showed that the positive reaction to HRA reform had not diminished – their survey of housing practitioners in England returned an astonishing 92% satisfaction rating for the reforms, with only 4% of respondents saying they were dissatisfied.

The report finds that most councils think that they have benefitted from the reform, with more funds available, and more control over housing upgrades and new builds.

Despite the positive overall reaction to HRA reform, two issues stood out as causing concern: the limits imposed by central government on local authorities’ borrowing, and ability to set rent levels for housing under LA control. These features have been criticised as undermining the spirit of the Localism Act, by denying local authorities the power to determine how they raise funds for new housing. In PwC and the Smith Institute’s report, 86% of officers were in favour of repealing the debt cap, while 76% thought councils should be free to determine rents.

The debt cap has acted as a brake on the autonomy afforded to London councils through HRA reform, but authorities have been coming up with some innovative responses. 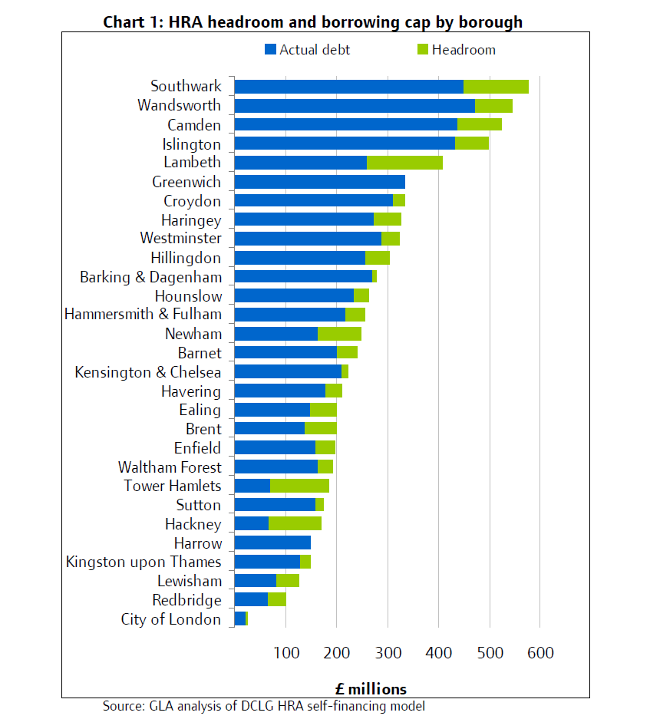 This 2013 GLA graph shows the relative limits imposed on London Boroughs by the debt cap. Central government maintains that a cap is necessary to encourage fiscal responsibility, although this has been challenged by local authorities and the GLA, who point out that councils are already bound to produce balanced accounts and are not inclined to risky borrowing behaviour. The London Finance Commission’s May 2013 report argued that lifting the cap would allow boroughs access to significant funding through which to build the extra housing that London needs.

In his 2013 Autumn Statement, Chancellor George Osborne announced that the debt cap will be raised by £300m. This will go some way to relieving pressure on those authorities with little headroom, and it signals that government recognises the concerns being raised – possibly spurred by the prominence of the housing debate – but the move stops short of allowing full autonomy on council borrowing for house-building.

London Councils notes that the extra borrowing capacity will come with strings attached in the form of a requirement for councils to sell off high value vacant housing stock. It is therefore likely that councils will continue to explore alternatives which give them greater freedom in how they address the need for new housing.

Barking & Dagenham, which has the fourth lowest headroom of the 33 boroughs, has turned to private investors to provide funding for new housing. LBBD has provided land for free for investors to develop – the council then lets and manages the housing, paying the investor a fixed annual fee. After 60 years, ownership of the property will return to the council.

Ealing has also looked to private capital as a way around the borrowing limits. In November (before the Autumn Statement) plans were approved to establish a Council-Owned Company (COCO) to develop 500 homes. The planned development would have taken Ealing’s borrowing beyond its £200m limit, but by establishing a COCO and transferring council land to it, the borough is able to use the new body to borrow outside of the debt cap.

Central government has already shown a willingness to relax the rules on borrowing as councils have come up against their limits. With the GLA supporting the majority of London Boroughs who oppose the cap, it is likely that pressure will continue for the cap to be raised further than the extra £300m already sanctioned, or to be abandoned altogether.

In the meantime, it is likely that more boroughs will adopt measures similar to those seen in Ealing and Barking & Dagenham, as the need to build more housing comes up against borrowing limits.