On December 17th, candidates on Round 6 of our Future London Leaders programme took part in a site visit to St Clement’s Hospital in LB Tower Hamlets to hear about this unique development from representatives of the Mayor of London, East London Community Land Trust and Linden Homes. 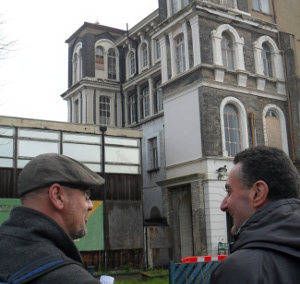 St Clement’s began life in the mid-nineteenth century as the Bow Workhouse, and was later used as a hospital. In the 1950s, it became a specialist psychiatric unit and continued in this use until 2005, when the hospital closed. Ownership of the site passed from the NHS to the HCA, and then to the Mayor of London.

St Clement’s is now the site of the first Community Land Trust in London. CLTs are community-owned, not-for-profit organisations established to provide permanently affordable housing and long-term stewardship. The CLT model originated in the US and has recently started to gain traction in the UK.

As the Capitals’ first CLT, the St Clement’s site is a pilot to demonstrate the viability of the approach, with the potential for a similar scheme at the Olympic Park to follow. The GLA will transfer the land on the site to a charitable community foundation which will hold the land in trust for the local community.

The visit began with presentations from Elinor Savage of the GLA, Graham Bridgman and Nick Summers of Linden Homes, and Dave Smith and Kate McTiernan of East London Community Land Trust.

Dave Smith, Project Director at ELCLT, spoke about the Trust’s commitment to providing “permanently, genuinely affordable housing.” The housing managed by the CLT will be sold at rates linked to average local income rather than market values. 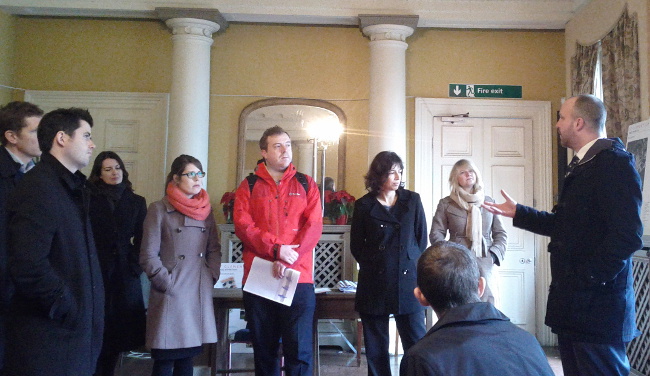 The site will eventually deliver 252 homes across a variety of tenures and sizes. Of these, 51 will be for affordable rent (through Peabody), and 23 will be for shared ownership through the CLT. Private housing will be provided by Linden Homes.

After an outline of the site’s history from Graham Bridgman, Nick Summers spoke about the community consultation process and its impact on plans for the site.

The site was originally intended as a fully residential development, but the consultation (carried out by John Thompson & Partners) revealed a desire for some community use on the site; as a result, the John Denham building on the north side will be used for community projects and will host a community café.

Locals also said community involvement in the scheme should extend beyond consultation and have a continuing influence on how the site develops. ELCLT is keen to support this and is looking to build on the success of the Shuffle Festival’s meanwhile use of the site, which has showcased local artists and film-makers and hosted a wide range of community activities.

Kate McTiernan hopes ongoing public-facing events will allow ELCLT to build and maintain strong links with the area, and that the popularity of the festival can be used to support other community facilities in the area.

Our speakers then led a tour of the site, discussing the plans and showing where community engagement had influenced the decisions made.

As a result of its long history, the site has several listed buildings, and Linden has worked with English Heritage to ensure that these are treated appropriately in the new plan for the site. As a former hospital, the site is surrounded by a perimeter wall and gates, both of which are also listed. This has posed difficulties in terms of creating links with the surrounding area, although the plans include through-paths which link the main road to the north with the park to the south, and offer views inside from the street.

The consultation process also engaged local residents in deciding which of the non-listed buildings should be retained in the development; those views informed the final plan.

The plans for the St Clement’s development were unanimously approved by Tower Hamlets council in December 2013 and work is expected to last 3-4 years.

Site visits are an integral part of the Future London Leaders programme, giving participants a chance to learn first-hand how schemes are being delivered innovatively across the Capital. Candidates on this round of FLL will next visit the Crossrail site at Bond Street in January 2014. For more information on becoming involved with the FLL programme, please get in touch with Jennifer Johnson.