On 9th January, candidates from Round 6 of our Future London Leaders programme visited Crossrail’s Bond Street station – getting a bespoke opportunity to learn, see and ask some highly relevant questions about the progress of Europe’s largest infrastructure project.

The £14.8bn Crossrail project will add 10% to London’s commuter rail capacity when it opens in 2018 and provide a new east–west link through the capital, connecting 29 stations in 15 London boroughs (as well as linking to 8 more stations outside London).

Crossrail has had a long history – the project was first proposed in 1989, but a parliamentary bill to establish the project in 1994 failed. Over the subsequent decade the case for a new rail link was re-established and a new bill was devised in 2005, receiving Royal Assent in 2008.

The huge scope of the project has inevitably meant that the initial planning stages took some time to complete, with successive governments keen to ensure that the planning, governance and finance structures of the project were robust and viable. 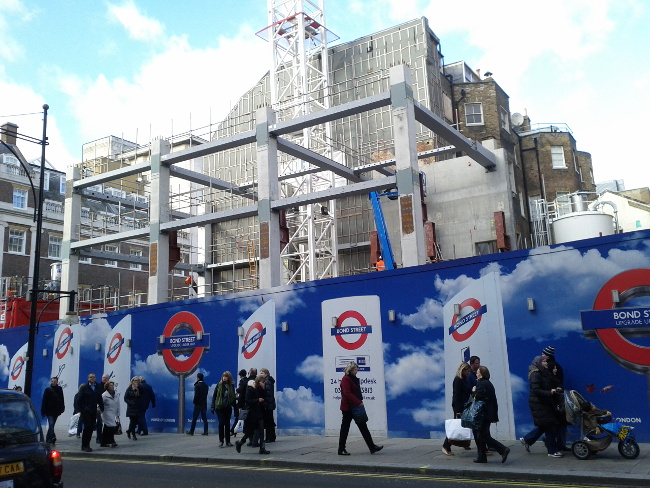 Key to the business case for Crossrail are the wider economic benefits it will bring in addition to extra transport capacity and links. It is anticipated that Crossrail will bring significant benefits to areas served by the line, especially where new stations are being constructed. Maximising this regeneration potential is the subject of Future of London’s current research project.

Further, new stations at seven sites in central London will be accompanied by over-site developments which will contribute to Crossrail’s construction costs – the first time such an approach has been used on a major infrastructure project in the UK.

Crossrail is also working with TfL and local authorities to improve the public realm around new and existing stations with an estimated £90m investment. These improvements are intended to not only create a high-quality environment for passengers, but also to stimulate further investment around stations.

In areas where there is significant surface work (for example, around the new central London stations), Crossrail has worked extensively with local businesses and residents to keep them updated, providing regular bulletins, exhibitions, and quarterly community engagement panels where locals can air concerns.

After a presentation and lively Q&A with Crossrail’s Stephen Deaville, the group got a ‘guided view’ of the western entrance to the new Bond Street station, with the chance to ask questions of the Crossrail team while overlooking the works.

Deaville outlined the construction methods being used to dig the tunnels and create the new station, and went on to discuss how the completed station would affect the area – Bond Street, as with most of the new build stations, will have two separate street-level entrances to the 250m-long station platform.

Crossrail construction is planned to be complete by 2017, and the route will open to the public in late 2018.

Site visits are an integral part of the Future London Leaders programme, giving participants a chance to learn first-hand how schemes are being delivered innovatively across the Capital. The previous FLL Round 6 site visit took candidates to St. Clements in LB Tower Hamlets. For more information on becoming involved with the FLL programme, please get in touch with Jennifer Johnson.