On April 29th, Future of London’s Communities in Transition field trip series continued with a trip to Woodberry Down, LB Hackney, as part of Green Sky Thinking week. GST events tackle all aspects of sustainability, and building sustainable communities was the focus of our visit, bringing together key stakeholders in the 30-year estate regeneration project.

Woodberry Down was built after WWII, and was one of the largest mass housing estates in Europe at the time. The pioneering development included a library, London’s first NHS health centre, and primary and secondary schools (including London’s first comprehensive school).

Despite its location between Finsbury Park and the East and West Reservoirs, and its proximity to Manor House station, the estate suffered from underinvestment, and over time physical deterioration was accompanied by high levels of crime and anti-social behaviour. In 1999, Hackney council decided to demolish and rebuild the estate’s housing blocks. An initial masterplan was drawn up in 2005, and work began in 2009. 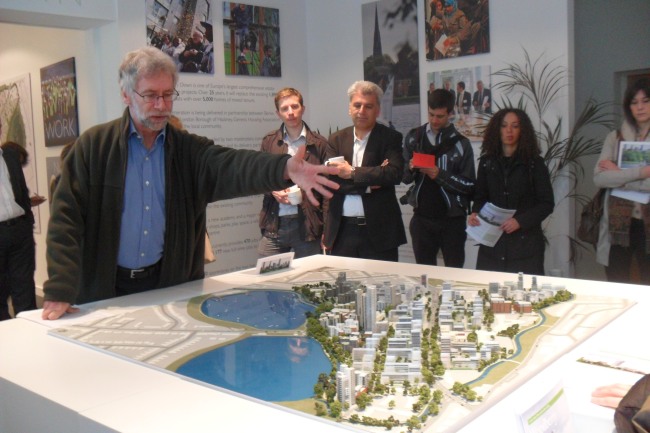 Now, five years into the regeneration project, significant progress has been made. LB Hackney’s David Lange – Project Manager for Woodberry Down – explained the council’s eight-phase, 30-year project to replace most of the housing blocks (significantly increasing density), while investing in improved public spaces and renovating community facilities such as the health centre, youth centre and schools.

The project is approaching the end of its first phase, with the second just underway. Daniel Massie, Development Manager for Berkeley, gave an update on the build programme, which has completed 860 homes to date. Of these, 64% have been “affordable” (76% at social rent, with the remainder shared ownership and shared equity) – the scheme as a whole will deliver 41% of homes below market rates.

In February 2014, a new masterplan for Woodberry Down was approved by the borough, which allowed for a further 800 homes (taking the total to over 5,000) and amended the layout of subsequent phases. Matt Bell, Berkeley’s Group Head of External Affairs, noted that the increased density has been accompanied by an increase of public space. He also said adaptability has been a priority, so that new spaces evolve as the estate does, and and can support a range of activities and uses. 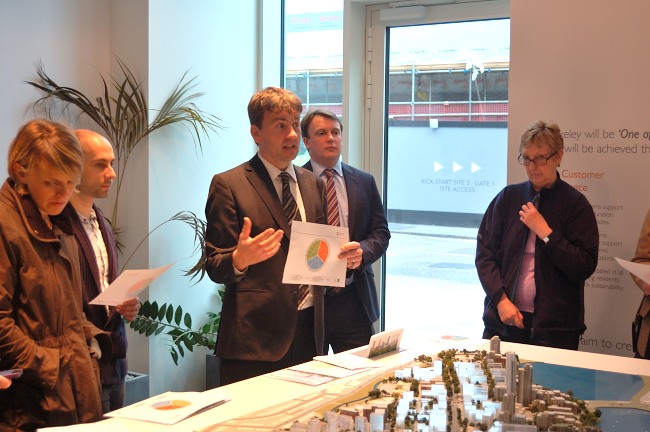 As is to be expected from such a large site, there are several constraints to development: the primary school was listed after the process was underway, which led to the planned academy being moved to the adjacent site, originally slated for a residential block which has been reprovided elsewhere; and perhaps the most significant barrier is the six-lane Seven Sisters Road which bisects the estate. LB Hackney are looking into the possibility of having the road narrowed.

To find out how new and established residents regard the regeneration process, Berkeley commissioned a social sustainability report [PDF] from consultancy Quod. The report uses recognised metrics to establish a picture of how residents feel, and where improvements could be made, and provides comparative results for similar areas.

Quod director Andy Hunt outlined some of the report’s findings including a life-satisfaction score of 90% against a national average of 66%. 71% of residents said they felt able to influence local decisions, against 40% nationally; and the report found that new owners and PRS tenants were likely to have moved from elsewhere in LB Hackney or LB Haringey, which borders the site to the north, fostering a strong local identity.

Despite this good news, the report highlights crime perception and feelings of safety as areas for improvement, alongside links with neighbours. Hunt expected these to improve as the work on the estate continues. Crime here has dropped significantly over recent years, but it will take time for the area to shake off its reputation for being unsafe.

The redevelopment is being carried out with minimal disruption to the existing community. Development has avoided a “double decant” – tenants having to move off the estate during demolition and then back to new homes – by building new social housing blocks first and only moving residents once.

The Woodberry Down Community Organisation (WDCO) has been the main interface through which the council and developers engage with the community. WDCO Chair Geoff Bell spoke about the integration of the tenants’ association into the planning process from the start – and how it has acted as a long-term ‘anchor’ in the process.

Berkeley paid for an independent architectural advisor to work with the group during the process of updating the masterplan, something Bell described as indispensable. WDCO was also involved in fortnightly meetings with the other partners, discussing everything from building size to community facilities to retail strategy. Resident engagement has continued beyond the formation of the masterplan, and will continue through design, build and post-occupancy maintenance. 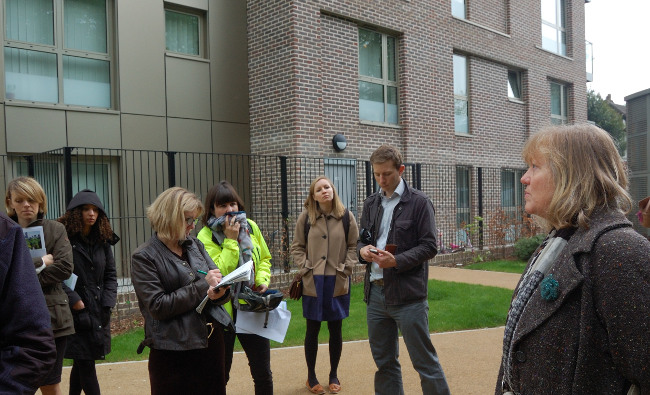 Outside the completed first phase of the development on the north side of the estate, Ann Griffin, Development and Renewal Manager at Genesis Housing Association, spoke about the provider’s decision to focus on the core issue of housing provision, whilst providing support to partner organisations to carry out the social regeneration aspects of the project.

We finished the trip at the Redmond Community Centre, home to the Manor House Development Trust. Director Simon Donovan explained how the organisation’s community work supports local people to start social programmes and make them self-sustaining. MHDT has also partnered with UCL and the GLA to run programmes addressing sustainable responses to climate change and improving public health.

The Woodberry Down regeneration project is notable not only for its size but for the willingness of stakeholders to work together on this long-term scheme, and their commitment to involving local residents, new and established, in decision-making. The Living at Woodberry Down social sustainability report shows that this approach, while not necessarily the easiest route for partners, has paid off when it comes to satisfaction within the community at how the process is being managed.

Future of London’s Communities in Transition series examines best practice in locally-directed regeneration, giving public-sector practitioners in planning, regeneration, economic development and related areas an opportunity to learn first-hand from stakeholders in an informal and interactive atmosphere. Our next trip is to Under the Westway on May 29th. If you would like to partner with us in organising a field trip, contact us.