Feeding a city the size of London sustainably is rife with challenges. From the rise of food poverty and food bank usage in the city, the impact of processed and fast food consumption, and issues around food security and provenance, it is evident that London’s public health relies heavily on its food system.

This is understood across all levels; from pan-London influencing to community-led activities via local policy-making, practitioners are facing these challenges head-on, and with tangible outcomes. How can we ensure that the benefits of this work spread across the system as a whole? This question was the focus of Food and health: Cross-sector approaches, the final seminar in our Delivering Public Health series, hosted by Arup on June 5th.

Martin Caraher, Professor of Food and Health Policy at City University London, opened the event with a comparative overview of London’s food landscape. An export-dependent system, the supply of food is a key issue – but so is distribution. Although overall spend on food has not changed during the recession, households have ‘traded down’ to cheaper products and lower-price supermarkets. Much of this cheap food is energy-dense but nutritionally lacking, creating what Caraher captured as a “a public health crisis…that is now a double jeopardy one of obesity combined with people going hungry.” Without a food poverty indicator, measuring the extent of this crisis in London is complicated but wider inequality measures can be used as a general proxy. 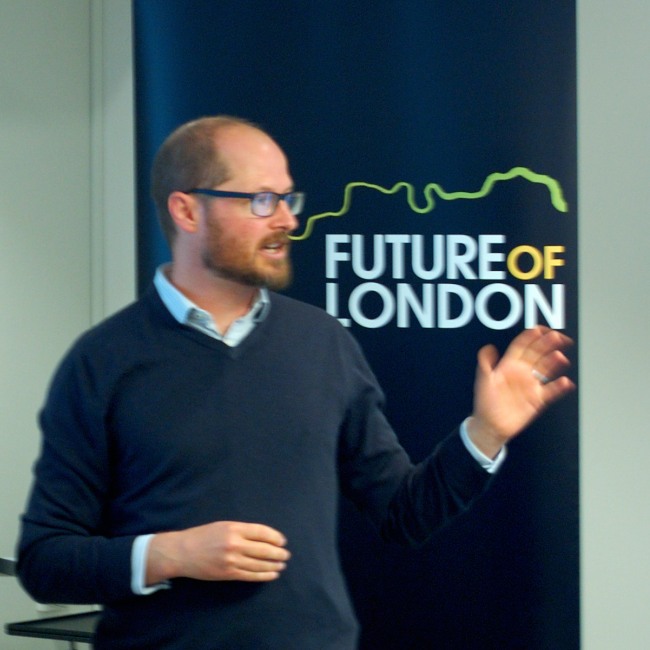 Drawing inspiration from food policy work in other major cities such as New York and Toronto, Caharer suggested that more could be done at a city level. Speaking from the GLA’s Food Team, Jonathan Pauling, Principal Policy Officer, highlighted the wide portfolio of work already underway at the pan-London scale, from preventing food waste by SMEs through FoodSave to Capital Growth’s creation of 2,012 (and more) new food growing spaces. In partnership with Sustain, progress on the food system’s contributions to health and sustainability are being tracked at the borough level by the London Food Board through an annual report ‘Good Food for London’.

Sharon Strutt added the borough perspective to the panel, in her capacity as Head of Neighbourhood Regeneration at LB Enfield. Food has long held an important role in Enfield, from wartime growing in glasshouses to present-day food and drink manufacturing in the large industrial estate of Brimsdown. The borough’s recently launched Garden Enfield initiative aims to channel some of Enfield’s strengths (land, delivery partner, ambition, support from the Mayor’s Regeneration Fund) and address its challenges (unemployment, poverty, skills gap) to deliver a vibrant and sustainable market gardening industry that responds to these opportunities.

It’s not just government that has a role to play. For panellists Meghan Zinkewich-Peotti and Jo Revett, Neighbourhood Partnerships Managers with Sanctuary Housing Association, working on food and health is a win-win: communities are supported and the environment improved, which in turn benefits social landlords. Part of Sanctuary’s work includes a focus on food growing, such as with the Colouring in Kingsmead programme they support; for other social landlords interested in this area, Meghan and Jo suggested the recently-released Edible Estates good practice guide to food growing for social landlords.

Event chair Jo Wilson, Future of London’s Head of Policy, helped to pull out common themes during the following discussion. A role for regulation – particularly through planning – emerged, but not without acknowledging its limitations; for example, planning could limit the establishment of new fast food outlets near schools or in areas of over-concentration, but cannot intervene with existing outlets. High property prices and competing land uses also impact the roll-out of food projects, as evidenced by the GLA’s difficulty in securing a premise for a community supermarket, akin to the Community Shop project that opened near Barnsley at the end of last year.

Financial viability of local food projects was discussed, as it emerged that much current project-based activity is heavily dependent on volunteers. This is a symptom of an ailing food system as a whole, exacerbated in London by the cost of land. If London is to grow more of its own food in the fringes, it was mooted that some form of land subsidy should be considered, in the same way that rural farming is (heavily) subsidised.

A closing reflection from the session pulled in themes from the first two events in this series, Embedding health in London boroughs and Poverty, inequality and health. Projects and programmes focused on food are important, but these schemes alone are not enough to confront the systemic roots of food poverty. “Food poverty is a symptom of inequality” and by focusing on food inequality, we are tackling the symptoms of a wider problem. A systemic approach is needed.

This was also a call for different parts of government to consider what role they can play. As Jonathan highlighted, a pilot scheme is underway to support boroughs to innovate and improve their food systems. The London Flagship Food Boroughs will receive support and funding over two years to innovate and improve their whole food environments, aiming to demonstrate that attention to food has transformative potential. Following Requests for Proposals to participate in the programme, six boroughs have been shortlisted, three each from inner and outer London. One borough from each group will be successful in joining the flagship programme:

Future of London will be following this Flagship programme – watch this space.

2 thoughts on “A healthier food system for London”