How London grows is critical to the city’s future: its competitiveness, resilience, quality of life, and equity rest on how it unfolds. The Mayor of London’s Infrastructure Investment Plan is grounded in this, considering the systems needed to underpin growth, how they could be delivered, and – importantly – how they could be funded. What form the city takes will also affect how well it flexes to accommodate population growth. On June 11th at City Hall, Future of London considered this spatial aspect of the Capital’s evolving geography at London 2050: Grow up or grow out?

The event opened with a hypothetical question. Assuming all was equal in deliverability, which is in the best interests of Londoners: densification and infill (‘growing up’) or expansion into the Green Belt and beyond GLA boundaries (‘growing out’)? By a show of hands, the audience of senior practitioners and thought-leaders split roughly 60-40 in favour of ‘grow up’.

The frank, Chatham House discussion that followed began with a keynote presentation from Sir Edward Lister, GLA Chief of Staff and Deputy Mayor, Policy and Planning. Lister was joined by a panel offering diverse perspectives on the growth question:

Throughout the morning, housing emerged as a clear focus. As captured by one panellist, the “supply of housing [is] an enabling tool for economic growth in London. Housing, taken as a piece of infrastructure, is one of the most (if not the most) important risks to London’s economy.” This had many reflecting on the history of house-building in London: “it’s a total myth that there has been a building boom in London since the war… The only ‘Golden Age’ [of housing] was in the 1930s – interestingly, nearly all on greenfield land, without benefit of the planning system.” What worked for northwest London’s Metroland in that era is systemically different from today’s approach to strategic planning — but could the spirit of transit-enabled expansion be harnessed to ‘grow out’?

Doubtless it can, and transit access at all scales is critical to successful new or growing communities. Still, a striking statistic provided a reality check in terms of what a scattering of new ‘Metrolands’ could deliver: “The average density of Metroland was around 25 dwellings per hectare; the density of residential parts of Hong Kong is 2,500 dwellings per hectare… a difference of a hundredfold.” If height works for other global cities, could it work for London? The recent debate around tall buildings makes clear that the Capital’s skyline is rapidly changing. Tall buildings have also made an inarguable dent in housing targets, with 11,500 residential units in the planning system in recent months, including nearly 4,000 affordable dwellings of some kind. ‘Growing up’, then, could also have its place.

Many agreed that both answers were part of the growth equation, but so were more nuanced approaches along the expansion/height spectrum. “So much of the discussion is driven by the Ebbsfleets of the world”, offered a panellist, adding that there is “temptation to focus on the largest opportunities, but there are lots of other sites within the city’s existing fabric that offer potential for accommodating growth.” Density, of course, isn’t just about low- versus high-rise buildings; town centres, estate regeneration and contracting high streets offer opportunities for rethinking layout and enabling denser development.

What emerged through discussion is that there isn’t a one-size-fits-all solution. “London is a series of 200 villages. [There is] no reason that all 200 need to look the same, but the point is that every one of them needs to increase their density.” How and where we deliver housing – and commercial, retail and community space – needs to reflect that diversity.

Of course, these villages don’t exist in isolation. The continued importance of the Central Activities Zone for employment and productivity means the Capital’s radial form will have a critical role to play for the foreseeable future. This doesn’t preclude the development of orbital links, or the rise of employment centres in the CAZ fringe or in Outer London, but it does up the ante for transport infrastructure in Central London.

Looking outward, two contentious areas emerged: the Green Belt and relations with the South East region. Development on the Green Belt had supporters and detractors, with one speaker calling for its protection while another felt that “careful release of Green Belt does have its place”. Though population outflows from London to the South East are predicted to pick back up as the housing market recovers, London’s relationship with the wider region is yet to be fully explored. London may be able to find enough sites to house the anticipated population increase within its boundaries, but should it? As transport corridors stretch into the wider South East, development beyond London’s boundaries would seem a natural match.

Underpinning the whole ‘Grow up or grow out’ discussion were the financial and economic realities of growth. Stakeholders – especially in local government – need a greater understanding of the factors influencing residential land value to enable meaningful discussions with private-sector partners. Resolving supply-chain issues is also vital to meeting build targets, as is overcoming market-entry difficulties for small-scale builders. On a broader scale, there is untapped potential in harnessing international investment for infrastructure of all types, and in expanding on funding mechanisms such as Enterprise Zones and Tax Increment Financing. The devolution of property taxes to London could offer further support.

What was clear from this event is that wherever the Capital aims on the spectrum between growing up and growing out, there is practical work to be done in assessing viable places for growth, and in communicating options and approaches. Over the coming months, Future of London will explore ideas and issues raised during the London 2050 discussion through delivery-focused events, briefings and visits. If you would like to be involved with this work, please get in touch.

Slides from the presenters are available to view below: 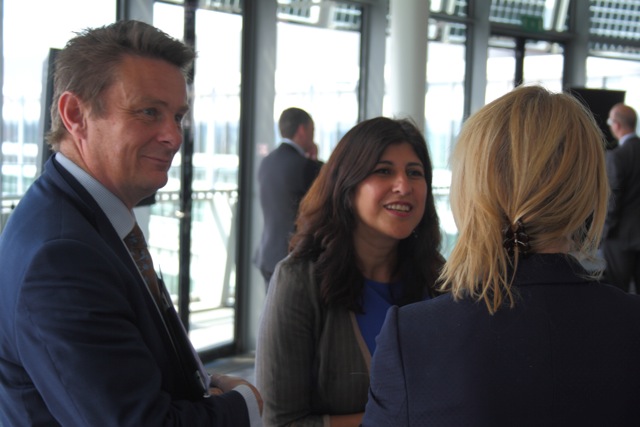