June 6th saw the latest instalment of the Hackney Cycling Conference, now in its third year. Hosted opposite Hackney Town Hall, the conference brought together transport planners, health specialists, and cycling enthusiasts to discuss the state of cycling in London, its benefits to the city, and how to promote cycling as a means of transport through infrastructure and policy. With the Tour de France set to pass through the Capital on July 7th, what better time to take stock?

LB Hackney is a suitable host for a cycling conference: the borough boasts the highest levels of cycling in the Capital, leading the tables for numbers of people cycling to work in both the 2001 and 2011 censuses, with 6.2% and 14.6% respectively. The borough also saw the highest increase between the two surveys, at 8.4 percentage points. 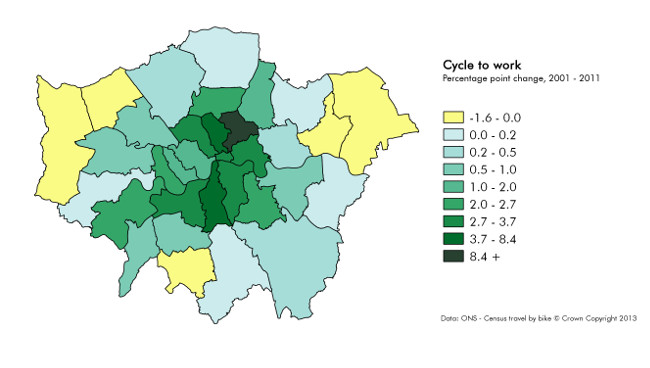 Inner London boroughs tend to have higher rates of cycling to work – distances to cover are smaller, and cycle provision is currently focused in the centre. After Hackney, the highest numbers cycling to work are in Islington (9.6% in 2011), Lambeth (8.1%), Southwark and Wandsworth (both 7.4%). By contrast, in many outer London boroughs, levels are between 0-1%, with three boroughs showing a slight decline over the 10-year period.

The Mayor’s Cycling Vision (PDF) targets a 400% increase in cycling from 2001 levels, with almost £1bn of investment planned. In addition to the well-known cycle hire and cycle superhighway schemes, funding is available for boroughs to implement a range of projects to provide safer cycle routes and other infrastructure, as well as promotional work such as cycle training.

The Mayor’s strategy also seeks to address the imbalance of cycling facilities between inner and outer London: Enfield, Waltham Forest and Kingston will be beneficiaries of Mayoral funding, after they won £30m each to develop “mini-Holland” schemes which use substantial investment in public realm and cycle infrastructure to encourage cycling in outer London.

Lucy Saunders, Public Health Specialist for the GLA and TfL, said the investment is justified: the health benefits of physical activity are the best way to combat rising obesity and related health problems. Cycling to work provides a cheap and convenient way to achieve regular exercise, and the benefits of cycling outweigh attendant risks of exposure to air pollution and road traffic accidents.

The GLA’s new report, Transport and Health in London (PDF), shows how an increase in cycling to work in line with the Mayor’s Transport Strategy would have significant benefits for the health of Londoners – an increase of 3,868 disability-adjusted life years (DALYs). This health impact could be maximised even further if the increase in cycling included groups who do not currently use cycling as a means of transport – this would add 6,853 years of healthy life for Londoners. 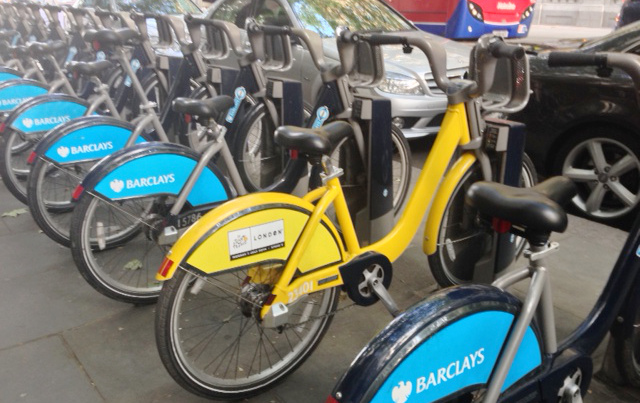 The Director of the Danish Cycling Federation (Cyclist Forbundet), Klaus Bondham, showed how Copenhagen has achieved very high levels of cycling through consistent investment in related infrastructure over several decades. While Copenhagen is much smaller than London, with around half a million residents, cycling enjoys a 40% transport mode share, with 30% of families using a cargo bike as their main means of transport.

In Copenhagen, activity is also high across all social groups, whereas in London younger men are most likely to cycle. Since overall health benefits are higher when non-cyclists adopt this mode of transport, there is a need to increase levels of cycling among women, the elderly, and ethnic minorities, all of whom are currently under-represented.

Many speakers stressed that the most important factor in making this shift is perception of safety. Mayor of Hackney Jules Pipe outlined some of the measures the council had been implementing to encourage actual and perceived cycle safety, including a 20mph speed limit on many roads, co-operating with TfL’s Better Junctions programme, providing cycling activities for school children, providing secure bike parking and returning one-way systems to two-way use to slow traffic.

With funding and political backing from the Mayor and technical assistance from TfL, boroughs now have strong support to encourage cycling, and are making significant progress, especially in inner London. As high-quality cycling infrastructure becomes more widespread, these trends can be expected to continue and, with the mini-Holland schemes, expand to outer London.