The South Bank Employers’ Group (SBEG) was established in 1990 as a voluntary association and unites major local employers to improve and promote the area. Since 1995, it has been joined by a sister organisation, the South Bank Partnership, which brings together political representatives from various levels of governance. Ted Inman, Chief Executive of the SBEG, outlined some of the group’s current initiatives, starting at Jubilee Gardens, before moving on to Stamford Street – the “South Bank Spine” and the South Bank terminus of the planned Garden Bridge. 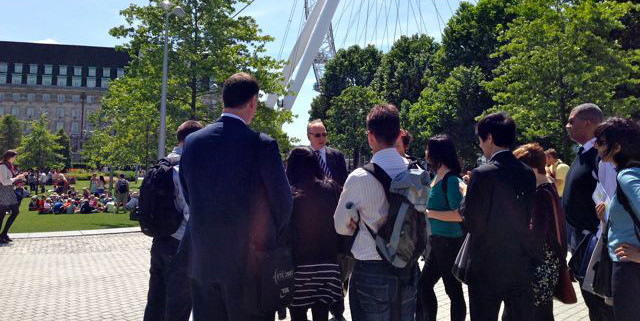 Keeping public and semi-public spaces clean and in good condition is a key concern for SBEG. Having improved the cleanliness of the area in the 1990s, the group knows first-hand that an ongoing effort is required to cope with the extra visitors who now use the area. This unglamorous but important work contributes to making the area one of the biggest tourist attractions in the Capital.

In 1997, the group invested in public realm improvements along the South Bank Spine, the part of Stamford Street which parallels the river from County Hall to Blackfriars Bridge. But lacking sustained maintenance and due to frequent disruption for utilities access, the route needs renewed investment.

SBEG is organising a new improvement programme for the Spine, which will take into account regular maintenance and utilities access. As examples of what can be done, Shell contributes funding for maintenance of Jubilee Gardens, while the Garden Bridge Trust has agreed to create an endowment for the upkeep of the new footbridge and its surrounding public areas. (The group’s full action plan is available here [PDF].)

Across Blackfriars Road, the Better Bankside Business Improvement District (BID) also co-ordinates public realm improvement and management, but operates on a different model. As a BID, Better Bankside receives a five-year mandate through a referendum of local businesses; the BID is then funded by a supplement to local business rates, set at 1.4% of rateable value and rising in line with inflation. Better Bankside was formally established in 2005, and this year will seek its third term.

While Bankside is home to many iconic buildings, it can often be difficult and sometimes even unpleasant to navigate at street level. One of Better Bankside’s initiatives, Bankside Urban Forest, is a long-running project to address this issue, improving the streets within the BID’s boundaries and promoting links between the riverside attractions and other locations in LB Southwark, such as nearby Elephant and Castle.

Valerie Beirne, Bankside Urban Forest Manager, spoke about how Better Bankside carried out audits of the area to identify spaces which could be improved and engaged with stakeholders to help bring about change. At Flat Iron Square, Better Bankside worked with the council to pave over an under-used road to create a public square which now hosts cafés, art and public events. The BID is also talking to Network Rail about bringing a row of derelict listed buildings beneath a railway bridge back into use. 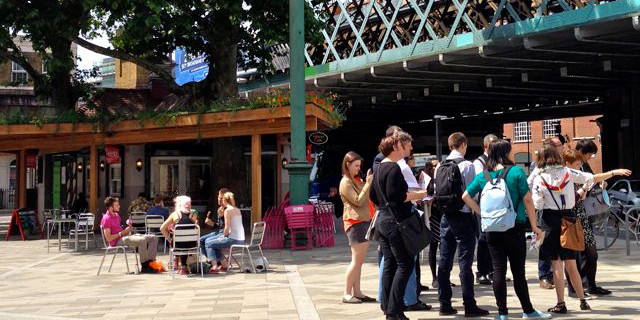 Around the corner from Flat Iron Square is the Southwark Street estate, built by Peabody in 1876 as part of its remit to address poverty in London. Nowadays, housing is seen as only one of the solutions to reducing poverty, and Peabody operates a number of programmes to help its residents gain skills and find work. The housing association offers employment and training programmes for tenants, working with its supply chain contractors to offer local apprenticeships and training opportunities. The London-wide programme has been so successful at finding jobs for tenants that its target has been raised by 500% to 1,000, and a recent jobs fair at Islington Town Hall attracted 2,000 people.

Peabody’s Executive Director for Housing, Sandra Skeet, emphasised how the housing association uses its assets to support its charitable aims: from setting up a college in an under-used community centre to taking out loans on its housing stock and managing commercial premises to subsidise rents and enable further development. With 80,000 tenants across London, half of whom receive benefits, Peabody is well placed to provide an access point to services, and, through neighbourhood charters, allows residents to articulate their priorities for what is needed in each area.

The three organisations we visited represent different models for how to fund and provide public services, whether as a voluntary association, BID or housing association. What they have in common are strong ties to a compact geographic area, giving them the ability to identify local priorities and opportunities for improvement, secure funding, and work with local stakeholders to deliver them.