In May 2014, residents of Queen’s Park in North Westminster secured their place in the history books by voting in inner London’s first ever parish council. At the inaugural meeting of Queen’s Park Community Council, on June 5th, the 12 new councillors were welcomed by Charlie Parker, Chief Executive of Westminster City Council, before being sworn in and starting work.

The establishment of the community council is the culmination of years of hard work by Queen’s Park residents, supported by the Westminster Council and Paddington Development Trust. The ward has a long history of community engagement on which the community council can build to address the area’s high levels of unemployment and deprivation; and Westminster Council, through its 2012 Community Governance Review, has laid the foundations for residents throughout the borough to take a greater role in shaping their neighbourhoods.

The heavily residential Queen’s Park ward is situated at the northern end of the City of Westminster, bounded by the Grand Union canal and the London Overground railway. The ward borders LB Brent to the north and RB Kensington & Chelsea to the south. The area has a population of 12,750, and ranks high on the list of London’s most deprived wards, along with the nearby neighbourhoods of Harrow Road, Westbourne and Church Street. 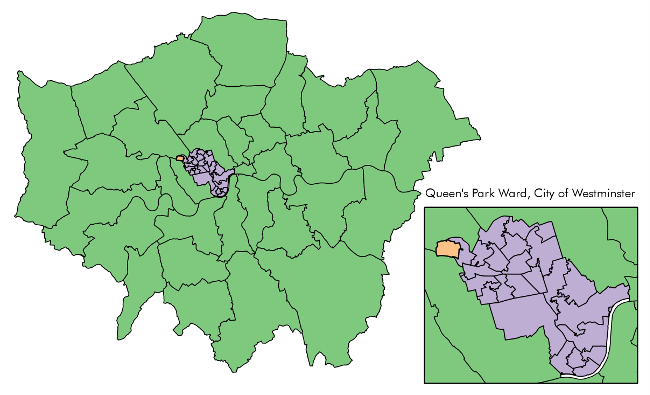 The precursor to the community council was the Queen’s Park Community Forum, created in 2003. This politically-independent elected body worked closely with area stakeholders and service users to tailor community services (such as park management and neighbourhood planning) to local needs, as well as organising twice-yearly festivals and trips for young people. The forum was popular but was put in jeopardy in 2008, when funding dried up as a result of the recession.

Paddington Development Trust, which has worked with the Queen’s Park community for around 10 years to empower residents and facilitate local solutions to the area’s problems, helped members of the forum explore alternatives, such as independent fundraising and greater use of volunteers. PDT also raised the possibility of forming a parish council, an option provided by the 2007 Local Government and Public Involvement in Health Act. This was attractive as it opened the possibility of a guaranteed income stream, providing stability and independence for activists to continue working for the community.

A long-time resident and former teacher, Singhate also stressed the effort that had gone into building community engagement and support for the community council (and the forum before it) through regular meetings and door-to-door outreach. The elected representatives on the new council reflect the diversity of the area, with councillors of all ages, ethnicities and backgrounds.

Among other measures intended to increase local democracy, the 2007 Act removed restrictions in place since 1963 which prevented the creation of parish councils in London; prior to that, no parish council had ever been established in Inner London. Parish councils are statutory bodies with elected councillors, with the power to raise funds through a ‘precept’ (parish tax) collected on top of council tax. Given that 80% of parish councils represent groups of fewer than 2,500 people, Queen’s Park Community Council will be among the largest, with its tax base allowing it to keep the precept low.

The precept, which will initially be set at around £40 per year for a Band D property, will be supplemented by fundraising and social-enterprise income. Under the 2011 Localism Act, parish councils are able to apply to manage local services if they can provide better value than existing providers (‘the Community Right to Challenge’), and the Queen’s Park Council is looking into the possibility of managing the local park as an additional source of income.

As well as the Community Right to Challenge, the Localism Act allows parish councils to take on the same planning powers as Neighbourhood Forums. At their initial meeting, the council also resolved to adopt the General Power of Competence, giving them a broad scope to undertake projects that have traditionally been outside the remit of a parish council.

Westminster Council has been supportive of the Queen’s Park community’s vision for grassroots service provision. On receiving a petition in support of a community council in May 2011, the council instigated a 12-month Community Governance Review to look into options for local service provision across the borough.

While the review was ongoing, Westminster Council provided legal advice to the Queen’s Park campaigners, and both bodies sought advice from local authorities and parish councils outside London who could provide guidance on the intricacies of establishing a new tier of governance in an inner-city authority.

Tom Kimber, the strategic planning officer at Westminster who carried out the review, emphasised that the time taken for the review was important, as it allowed the council to not just assess the proposed Queen’s Park Community Council, but also gauge interest in parish councils across the borough as a whole, as well as prepare for other forms of community governance (i.e. neighbourhood forums).

As part of Westminster’s Community Governance Review, a referendum was held in Queen’s Park ward to confirm that the community council was fully supported by residents. The referendum, which allowed online, telephone and text voting as well as traditional paper ballots, provided this confirmation, with 69% supporting the formation of the community council (turnout was 20% of the ward’s 8,000 registered voters).

A Westminster Council Reorganisation Order in October 2013 officially established the new parish and council, with elections to be held alongside local elections every four years. The Order also acknowledged the ‘shadow’ council set up by the campaign group to prepare for the election. 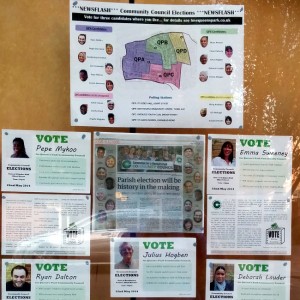 The council and its precursors have been helped by the Paddington Development Trust, which helps communities in North Westminster take a greater role in directing change. Neil Johnston, Chief Executive at PDT, said that regeneration can only be successful if it engages with those who will be affected; to this end, he strongly supported the council’s democratic mandate.

The Trust provided governance support to the Queen’s Park campaign group, working with residents and service providers to identify priorities and the options available to pursue them. After the decision was made to set up a community council, PDT provided funding for ongoing facilitation until the elections were held in 2014 and the council could take control of its budget. The Trust will continue to work closely with the Community Council on projects to empower residents and address social exclusion.

As all interviewees agreed, different measures will be appropriate for different areas – a community council will not work everywhere. In Queen’s Park, the strong established community forum provided a foundation that could support a new statutory body – the community already had positive relationships with local service providers, and had developed a plan for the neighbourhood, setting out priorities guided by consultation with residents.

The Queen’s Park Community Council will not replace other initiatives currently running in the area (for example, PDT’s community health programme, or the police’s Safer Neighbourhoods team), but will provide locals with another means to define and pursue their own priorities. Elsewhere in Westminster there has been a high level of interest in neighbourhood planning, with 21 neighbourhood areas currently covering about 75% of the borough.

While Queen’s Park has become the first parish council in London, it is unlikely to be the last. Angela Singhate has already heard from other community groups interested in following this route – as well as from government ministers looking to evaluate the effects of the Localism Act. Through its Community Governance Review, Westminster Council has provided a template for other London local authorities to assess demand for alternative forms of local democracy and implement them in accordance with new legislation.