London’s housing need is well established. According to the Mayor’s Draft London Housing Strategy, the Capital needs at least 42,000 houses per year in order to satisfy demand, and is at the moment providing only around half that amount. While plans are underway to boost house-building through policy measures such as the Mayor’s recently announced Housing Zones, local authorities are under pressure to deliver housing more immediately.

While councils previously had powers to build or buy homes, until recently they have been hampered in doing so by strict borrowing rules and conditions attached to funding. The 2011 Localism Act changed this with two important reforms: HRA reform gave councils more powers (although still restricted)to borrow money, while the General Power of Competence allowed councils to carry out any action which is not explicitly forbidden by legislation – such as setting up a private company.

Driven by the pressure of housing need, councils are now beginning to use these powers to explore new ways of supporting housing delivery. 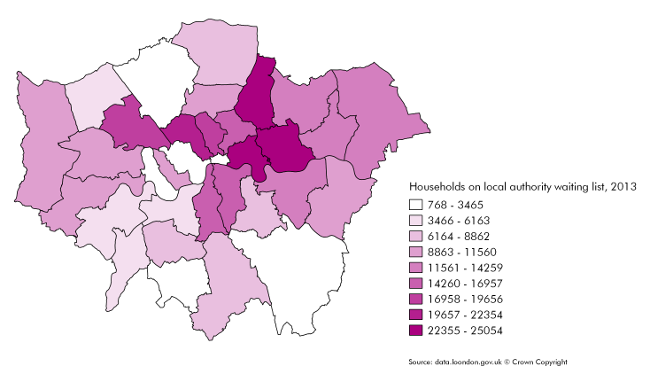 In April 2014, Enfield council set up a wholly-owned private company, Housing Gateway, to buy homes which could be used to discharge the council’s statutory homeless duties. The borough faces an acute shortage of temporary accommodation; the cost of housing homeless families could rise to £7m in 2014 as the borough tries to carry out its statutory duty to house the homeless. Enfield had around 2,100 families in temporary accommodation as of 2013, and a lack of available housing forces the council to rely on expensive but poor-quality nightly accommodation.

Housing Gateway identifies appropriate housing within a reasonable price bracket and arranges purchase and renovation via the council, which then transfers the properties back to the company to own and manage. Funding is drawn in phases from the Public Works Loan Board, and repaid through rental income. While the company’s business plan cannot take account of savings to the council, each family moved out of temporary accommodation represents a minimum saving of £5,000 per year.

For Hayley Coates, Enfield’s Programme Manager for this project, Housing Gateway has a number of benefits: it allows the council to set rents at a level equivalent to Local Housing Allowance rates; offer more stable tenancies to vulnerable people; and adjust rents when tenants’ circumstances change. Tenants get quality housing, and the council also helps them find work and more permanent housing.

So far five properties have been purchased, with offers accepted for 45 more. Having analysed the local housing market, the council has targeted buying up to one-third of the appropriate housing that is available in the borough within its price bracket. Coates is aware of the risk of distorting the market by inflating demand, and says the council will regularly assess conditions, to inform both its policy and buying strategy.

Enfield is also in the early stages of establishing a sister company, New Foundations, which will focus on new-build housing for market rent. Other boroughs are also adopting this approach. After exploring options for building through joint ventures and PFI, LB Sutton recently approved the creation of a council-owned company to build new homes in the borough. The company will mark the council’s return to house-building for the first time in 20 years.

Simon Latham, Executive Head of Community Living at LB Sutton, says the council is acting on a wave of cross-party support for local authorities to build housing in London to address unmet demand. The borough is pursuing a twin-track approach, using HRA funding and receipts from Right to Buy to build new Affordable Housing, and setting up the COCo to develop properties for private rent. The council is also applying for Housing Zone status, which if successful would provide further access to loans and GLA resources.

Latham says that building through a private company is attractive because the properties will be exempt from Right to Buy, meaning that the council can maintain access to housing and create a revenue stream which can contribute to its General Fund. As an extra source of income, COCos can help offset the effects of reduced budgets, especially with further cuts expected in 2015.

As in Enfield, Sutton’s housing company will draw funding through the council via the Public Works Loan Board, since at present this offers the best borrowing rates. However, other borrowing options remain open, and in the future it may be viable to seek institutional investment, especially if several authorities pool their schemes.

Ealing’s COCo, Broadway Living, was set up in June 2014 to build mixed-tenure housing outside the borrowing limits imposed under the HRA. The council has committed to building 500 homes over the next 5 years, and Dave Baptiste, Ealing’s Head of Housing Development, explained that the company will allow Ealing to be ambitious and proactive in providing housing in the borough.

Ealing already builds social housing through its HRA borrowing, and is taking on regeneration schemes on the Copley Close and Golf Links estates in-house. However, the council is now approaching its HRA borrowing cap and must find ways to continue developing housing while keeping new debt off the books. The company will start up with a loan from the council’s General Fund, which will not count towards the HRA borrowing cap.

Ealing’s COCo is already close to completing its first 10 units, which were transferred from a previous scheme. Further homes can be expect in around 18 months’ time.

Dave Baptiste stresses that while exemption from Right to Buy and rental income are benefits, they are not the main drivers of the scheme. He cites the provision of housing and the ability to unlock new development as much more important, and hopes that the COCo will give the council a more advantageous position when working in partnership with other developers – rather than simply providing land for others to develop.

For any council, setting up a private company allows more control over house-building – in not relying on grant funding, for example, councils have more control over setting below-market rents, are able to utilise revenues outside of housing, and can maintain full control of a property portfolio that is not subject to Right to Buy. The structure also gives authorities greater flexibility – they can work alone or with partners, build for sale or rent (PRS or social), and expand or contract to meet demand.

For the time being at least, these COCos will use their councils’ in-house expertise, paying a percentage cost towards salaries and using outside consultants where necessary. This has the added benefit of developing staff skills and experience.

Board members of the new companies are variously made up of executive officers, elected members, and independent experts – the set-up varies slightly between companies. As the COCos are wholly-owned by councils, they are bound to act in the interests of their local authorities and their policies.

All three councils are looking at what other services might be better provided through council-owned companies: Enfield and Sutton are looking to establish COCos for district energy provision, and in theory a company can be set up to provide any service. However, Hayley Coates says that it will not be the best solution to every problem; councils should use this power selectively and not set up companies for the sake of it.

Still, other councils are keen to learn from this experience. Watch for more councils setting up companies, and for COCos delivering a much wider range of services, as councils come under pressure to do more with less.