On 8th October, Future of London visited Colindale in LB Barnet for the latest in our Communities in Transition series.

Colindale is located at the western edge of Barnet, on the border with Brent, and is part of the Burnt Oak/Colindale Opportunity Area. An Area Action Plan drawn up in 2010 set a target of 10,000 new homes in the area by 2025, a significant increase in an outer London borough which has largely suburban characteristics.

Martin Smith, Regeneration Manager at LB Barnet, started by outlining the council’s plans for Colindale: the key areas for densification are around the Underground station and on the Grahame Park estate. A new high street is planned for the area around the tube station, as new residential developments come forward.

Colindale is set to be the case study for Barnet’s recently published Open Space Strategy (pdf), which aims to use public sector investment in parks to add value to private sector investment in the area. Ruth Miller, Colindale Project Manager for LB Barnet, noted that Colindale has a large number of green spaces, but at present they are poorly maintained. The new strategy seeks to create better links between the area’s open spaces and in doing so integrate the surrounding developments and create a stronger local identity.

Montrose Playing Fields, a large park to the north of the tube station, is currently underused and neglected, with poorly-marked access, but is surrounded by large development sites. Pending the results of a consultation, it will receive investment to improve access and services – the council hopes to improve sports and youth facilities and provide a cafe, as well as making improvements to the park’s entrances and signposting. Colindale Park, opposite the station, will receive a bridge to link it to the Peel Centre site on the other side of the railway.

Around 15% of Colindale’s new housing will be delivered on the Grahame Park estate. Matt Rumble, Development Manager for Genesis Housing Association, outlined the plans for the 1960s estate, which is undergoing a phased demolition and redevelopment, and will see significantly increased densities. 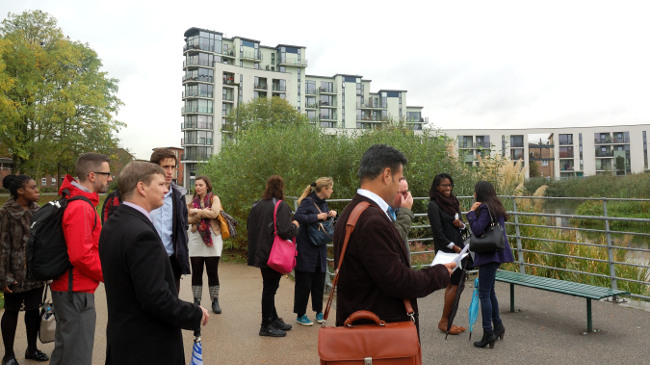 After the first phase was completed in 2012, further phases stalled due to viability concerns. Higher demand is expected for later phases, which will be situated closer to the Underground station. Genesis has now applied for funding from the government’s Estate Regeneration Fund which, if successful, will kick-start further phases and allow Genesis to complete the development around 5 years early.

Polly Boardman, Social and Economic Development Manager at Genesis, and Paul Bragman, an independent regeneration consultant working in Colindale, spoke about the social regeneration strategy Genesis is pursuing at Grahame Park. Through the Colindale Communities Trust, Genesis hope to help disparate community groups work together to pursue their goals, bid for funding, and engage residents.

The first step in this has been to provide information on which groups exist and what they are doing – but a more ambitious project has seen the local college provide free, accredited training for residents to carry out social research which is pooled as a common resource for organisations to use as evidence when applying for funding.

To the south of Grahame Park’s main concourse, smaller sites are being developed with the aim of re-establishing a coherent street pattern and allowing for a mix of property types (based on a masterplan by Pollard Thomas Edwards). With large numbers of one- and two-bedroom properties already being provided by private developers, Genesis and Barnet are reassessing what types of properties should be provided on Grahame Park, and are producing a supplementary planning document to guide this. 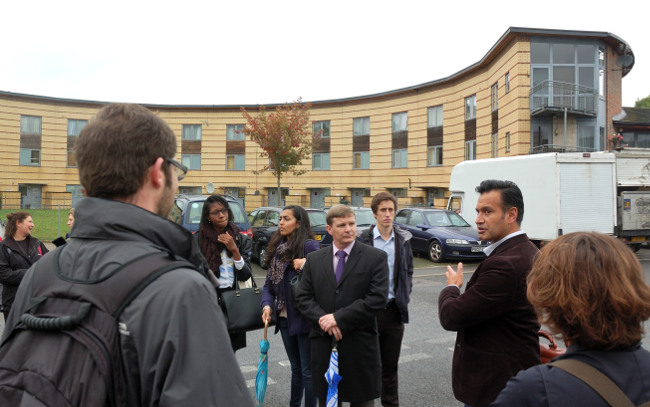 With development around Colindale picking up pace, Adam Driscoll, Infrastructure Planning & Delivery Manager at LB Barnet, explained that a key challenge for the council is maintaining a coherent character in the area. The departure of several large institutions – the British Library, the Metropolitan Police, and the NHS – has provided ample space for new developments, but has also left Colindale lacking a strong identity. New developments have tended to identify with other nearby areas, such as Hendon, rather than Colindale itself.

The Open Space Strategy is one attempt to address this issue, but Barnet is also consulting on other ways to ‘brand’ the area. At the end of the visit, attendees were invited to submit feedback on what a vision for Colindale might look like, how to make the most of the area’s existing amenities and resources, and where targeted investment might have the most impact.

Communities in Transition examines best practice in locally-directed regeneration, giving public-sector practitioners in planning, regeneration, economic development and related areas an opportunity to learn first-hand from key stakeholders in successful regeneration schemes, in an informal and interactive atmosphere. If you would like to partner with us in organising a field trip, contact us.