Low pay affects around 20% of people working in London, a figure that has stayed fairly constant over the last 20 years. As income distribution becomes increasingly polarised, low-paid work has gained greater importance from a policy perspective: not only are those living in poverty now more likely to be working than unemployed, but the guidelines to be introduced through Universal Credit will require those on low pay to actively look to progress to better paid jobs.

Our 16th October seminar, Tackling Low Pay in London, took stock of current trends in addressing low pay in the Capital, and looked at what strategies are available to councils to engage workers and employers in low pay sectors. Some of these issues were first raised at our May seminar, Linking poverty, inequality and health. 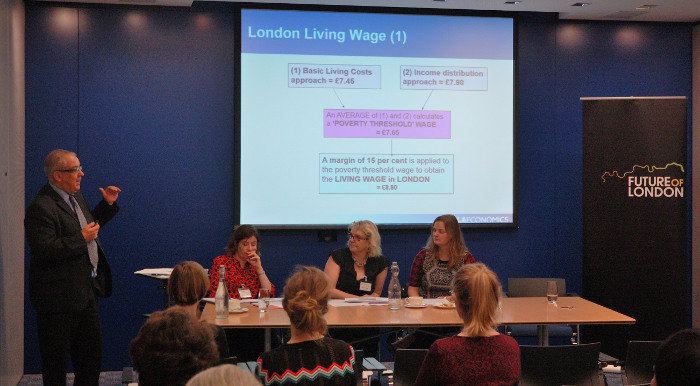 Much of London’s low-paid work is concentrated in specific sectors, such as cleaning, hospitality, retail and social care. The fall in full-time employment and the rise of temporary contracts – which are more likely to be low-paid than permanent positions – exacerbate the situation.

Jonathan Hoffman, Economist at the GLA and author of the Low Pay in London working paper, noted that while low pay and poverty are separate concepts, low pay is an increasingly significant factor in London’s poverty profile. A 2013 study found that benefits claimants are now more likely to be working than not. Helping people to progress out of low pay can therefore also be of significant benefit to our public finances, as well as helping individuals out of poverty.

There is much that councils – or any large employer – can do to promote better working conditions for staff, whether employed directly or through third party suppliers. Sarah Ireland, Director of Strategy, Commissioning, Procurement and Performance at LB Croydon, outlined some of the measures they have taken to improve pay in the borough.

Since a change in administration after the 2014 local elections, Croydon has made addressing low pay and introducing the London Living Wage (LLW) priorities. Around 70% of Croydon council’s 3,000 employees live within the borough, and the council spends over £1bn a year on providing local services. As a significant local employer and investor in the local economy, the council can have an important impact on economic development within the borough – introducing the LLW for all council employees and agency staff is a first step in this direction.

Croydon’s procurement team has also been working with the council’s economic development team, to make sure local people benefit from investment. Incentivised by the Public Services (Social Value) Act 2012, which requires public authorities to have regard to economic, social and environmental well-being in connection with public services contracts, Croydon is working with employers to develop a structured range of options for service providers to use in demonstrating social value. They are also introducing a points-based system to measure contractors’ social return on investment. 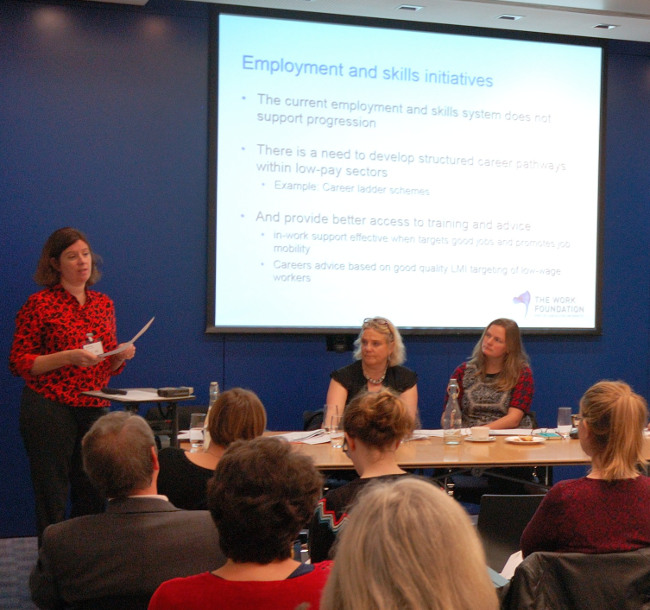 Kathryn Ray, Senior Researcher at the Work Foundation, picked up on some of the approaches that can help policy-makers address the problem of persistent low pay, where people are on low rates of pay for consecutive years – again, most common in low-paid sectors. To be effective, policies should adopt a two-sided approach, targeting interventions at low-paid workers and their employers. Workers should be provided with careers advice and training to give them skills to progress out of low-paid work; and given London’s highly polarised employment market, employers might consider creating more mid-tier jobs to allow people to bridge the gap between low- and high-skilled jobs.

These approaches are intended to work alongside the continued promotion of the London Living Wage, the voluntary minimum wage which has been calculated based on London’s higher living costs. This level is set to be reviewed in November 2014, but Ray noted that while engagement with employers could yield positive effects in some sectors, there would likely be sectors such as cleaning (where persistent low pay is a particular issue) where change needs to happen centrally to significantly improve conditions.

Speakers – and audience members – underlined that high quality data is important, in order to monitor labour market trends and accurately target interventions. Having tools to help workers progress out of low-pay jobs is also critical: for workers, to open up career ladders within their current area or to help in moving into a higher-paid sector; and for the unemployed, to access entry-level positions to get them into work.

The event was kindly hosted by: