Consultation on the Mayor’s London Infrastructure Plan 2050 closes today, October 31st. To support this critical effort and help round out responses to the plan, Future of London has issued its first ‘London 2050’ briefing paper, on what must be done to smooth the capital’s inevitable expansion beyond Greater London Authority boundaries.

In June 2014, Future of London hosted a successful event at City Hall – London 2050 – Grow up or grow out? – which began to explore key delivery and governance issues for the London Infrastructure Plan 2050. As the first follow-up paper in the series, Future of London has published Working Beyond Boundaries. This briefing paper explores growth and strategic planning across London and the South East, with a view to sharing best practice and supporting collaborative efforts across the region. 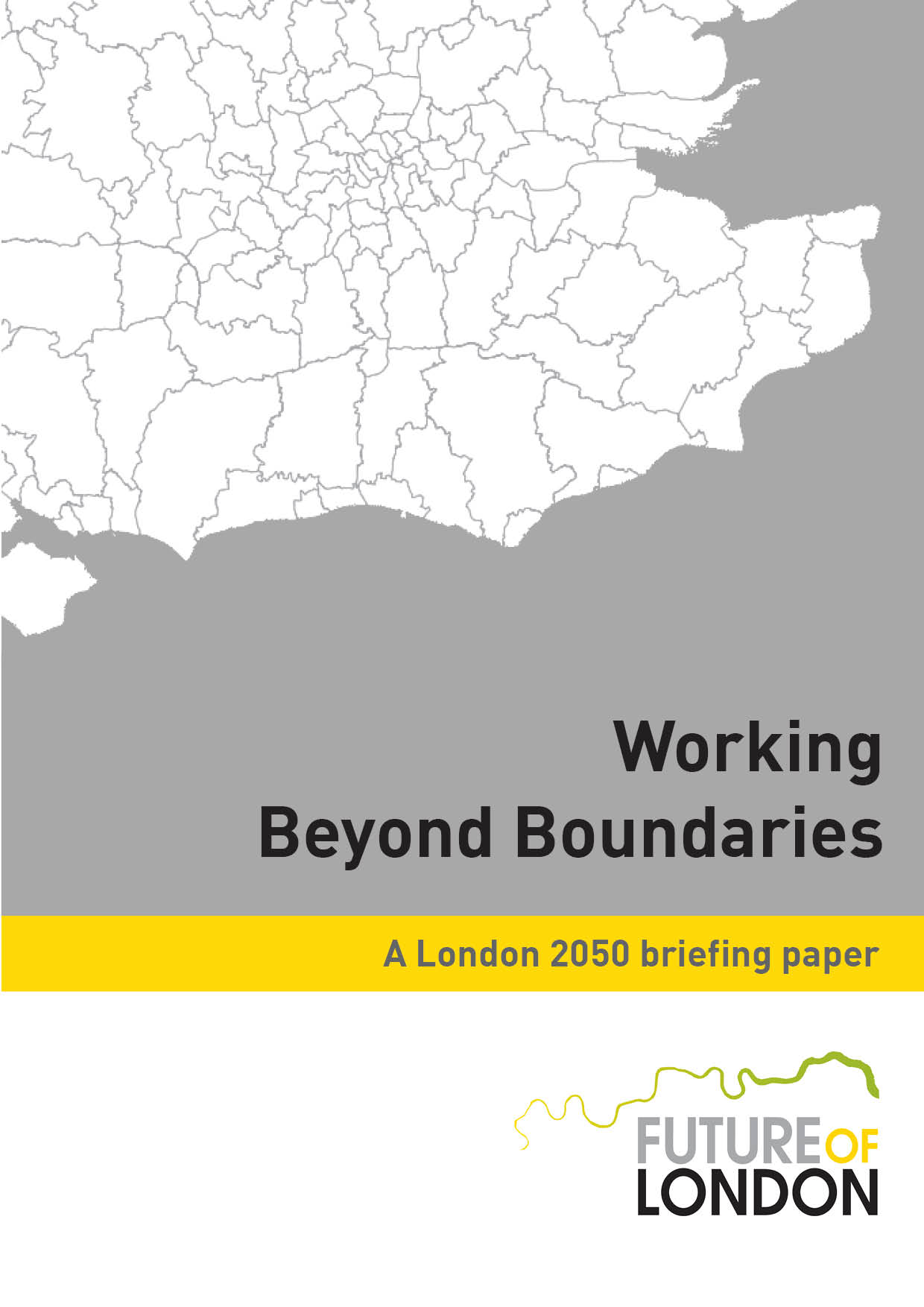 London is already functionally linked with the wider region in many ways: housing, transport, and the economy among them. Since the dissolution of regional spatial strategies in 2010, however, local authorities and other public bodies have only been bound by the duty to cooperate to engage in strategic cross-boundary matters. Beyond this obligation, little such planning is taking place in the region, especially in relation to London. With population growth expected in local authorities across the region, now is a critical time to discuss the Capital’s expansion.

From housing and infrastructure to the people they serve, this topic doesn’t just reach across geographic boundaries: it also crosses sectors and time frames. To focus the topic, this briefing paper and the related roundtable have been framed around three big questions:

This paper summarises and builds on Future of London’s senior roundtable on working beyond boundaries, which was attended by senior practitioners from across London and the South East. In addition to this anonymised summary of key points from the roundtable discussion, it also includes submitted contributions from practitioners engaged with the topic: Joan Hancox (Hertfordshire LEP), Sue Janota (Surrey County Council), Barney Stringer (Quod) and Chris Paddock (Regeneris).

With the London Infrastructure Plan 2050 consultation closing on 31st October 2014, this paper concludes with reflections on the important role that cross-boundary working will have in the plan and beyond. Here’s an extract:

Within the current framework, there is a key opportunity for cross-boundary working in the capital’s strategic planning efforts. The Mayor of London is currently developing the London Infrastructure Plan 2050, which aims to set out what is physically needed to underpin London’s growth and world-city status. Out for consultation from July to October 2014, the plan highlights the importance of collaboration between London and the South East.

The Infrastructure Plan’s positioning of housing as infrastructure is critical. The London Plan concludes that London’s population growth to 2025 can be contained on brownfield sites within the Capital’s boundaries. While defining the geography of further growth is not one of the Infrastructure Plan’s objectives, the consultation did provide a forum for exploring where growth might be accommodated.

To inform the Infrastructure Plan, the Mayor undertook an initial analysis of development potential in the areas surrounding London. Increased residential density along transport corridors and in town centres, combined with the development of new towns and urban extensions, suggests that around 1m additional people could be housed in the areas surrounding London. Much of this development potential comes alongside confirmed or proposed rail projects (see map).

This spatial distribution emphasises two points: first, new infrastructure, especially transport, will heavily shape where population growth occurs; and second, the South East has a clear role in London’s infrastructure planning. The consultation acknowledged this, stating that local authorities both within and beyond London will need to plan cooperatively for further growth.

There are already some mechanisms for cross-boundary working, such as the evidence submitted by local authorities in response to consultations on London’s strategic plans. These links could be strengthened by further proposals from the draft infrastructure plan; for example, the proposed London Infrastructure Delivery Board — intended to ensure joined-up delivery of infrastructure in London — could include representatives from the South East.

A catalyst may be in the consultation’s focus on devolution. As recently suggested by the RSA’s City Growth Commission, this policy may be most effective at the city-region scale, which would reflect London’s functional economic area rather than its administrative boundaries. Agreeing the spatial extent of fiscal devolution will be decisive for London’s future relationship with the South East.

Future of London’s work in the London 2050 series also includes the following:

All of the above events are sponsored by Arup. The Working Beyond Boundaries roundtable was kindly hosted by AECOM. Production and printing of all briefing papers in the London 2050 series is sponsored by Regeneris.

For more information about work in this series, please get in touch with Jennifer Johnson.