We launched Engaging Private Landlords in Energy Efficiency on 3 December at Pinsent Masons. This report, sponsored by EDF Energy, examines London’s private rented sector landscape, and how the public sector can support landlords to improve the energy efficiency of their properties. It identifies four main challenges that boroughs face, before offering a number of actions for overcoming these challenges and raising standards. The report concludes with eight policy recommendations for improving the sector long term.

The research that informed this report was carried out between August and November 2014. It included desk-based research, two practitioner research seminars and interviews with various sector professionals.

Many of the research participants were present at the launch event, which drew together around 50 practitioners to hear the research findings and various practitioner perspectives, and take part in the ensuing discussion. 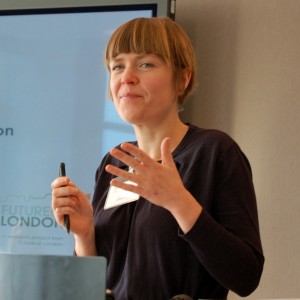 Jo Wilson, Future of London’s Head of Policy and report author, presented the research findings. The report found the four biggest challenges facing boroughs to be: an unfavourable funding landscape; physical barriers to retrofit; lack of communication channels with individual landlords; and weak incentives for landlords and tenants to act. She then ran through approaches to getting past each of these barriers, before finishing with four conclusions. She explained that difficulties with gathering data on London’s landlords had been one of the biggest challenges to carrying out the research, as well as a fundamental challenge to being able to reach landlords and influence them to improve standards.

This was followed by four different perspectives on the agenda:

Matt James, RE:NEW Programme Manager, Capita, ran through RE:NEW’s activities in the PRS, acknowledging that it was a difficult sector to tackle. As the third phase of the programme gets underway, specific initiatives for delivering retrofit in the PRS include grants to go towards demonstration projects and incentives for lettings agents to act as influencers.

Chris Lee, Innovation and Partnerships Manager, London Borough of Haringey, gave some lively insight into the Smart Homes programme that he is leading for six north London boroughs – Camden, Enfield, Hackney, Haringey, Islington and Waltham Forest. Together, these boroughs received £6m Green Deal Communities funding from DECC to deliver area-based retrofit in both the owner-occupied and private-rented sectors. Although it is early days with the programme, the difficulties that he spoke of in terms of engaging private sector landlords and making the business case – particularly for solid-wall retrofit – chimed with the report’s own findings.

Richard Tacagni, Head of Private Sector Housing, London Borough of Redbridge, shared some of the enforcement successes he has led for the borough, which are protecting residents and raising the lowest standards in the sector. He explained that action was taken on a case-by-case basis, and that though some procedures led to the removal of a landlord from the sector, others led to landlords making significant improvements their properties. These more ‘remedial’ strategies are critical to maintaining much-needed private sector housing supply.

Finally, Alan Whitehead MP gave his perspective on the PRS energy efficiency regulations, having been part of the Energy Bill committee that agreed the primary legislation. He expressed frustration that the secondary legislation had not yet been released by DECC, considering that the tenant’s improvement regulations must come into force by 1 April 2016. He confirmed the need for safeguarding tenants against retaliatory evictions if the tenant voice was to have a role in improving conditions. He also suggested that area-based approaches to retrofit could deliver improvements by creating economies of scale for both social and private tenures.

The discussion that followed touched on a number of themes, including the difficult (impossible?) balance between conservation and energy efficiency and local approaches to gathering information on PRS properties through Energy Performance Certificate data and licensing schemes.

Thanks to grants from Oak Foundation and  Trust for London, this research project is the opener to a larger Future of London work programme on the private rented sector, which will continue into 2015 and beyond. New projects will revisit many of the themes raised in the report, including the need for data, borough licensing and the role of the tenant.

The report and executive summary are available to download here.