On 26th November, Future of London held the third event in our London 2050 series, Surface Tension: Underground London’s impact on the world above. This half-day conference was kindly sponsored by Arup, and brought together public- and private-sector planners, transport experts, engineers and archaeologists to discuss best practice in managing underground infrastructure projects.

With some of the oldest tunnels, sewers and underground railways in the world, London’s subsurface infrastructure presents a minefield for new developments, both above- and below-ground. The Lee Tunnel drops down 80 metres to avoid existing infrastructure, while Crossrail’s tunnels have to weave through 42 earlier tunnels and pipes; future projects will be even more complex.

Building and upgrading London’s physical infrastructure is not just an engineering challenge; the social impact of works is a crucial concern for local authorities: communities around project sites often suffer from noise and disruption for months at a time, and the eventual benefits might not be readily apparent to those affected since they are often intangible or spread across a wide population. 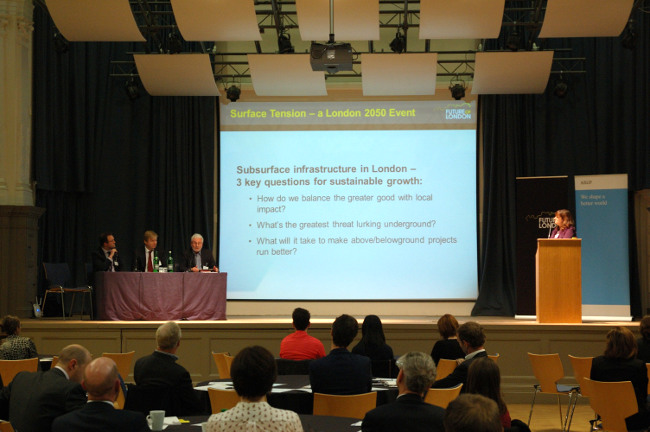 These physical and social considerations were discussed in relation to London’s long-term infrastructure needs and ongoing projects. Throughout the afternoon, speakers addressed three key questions:

Many common themes emerged from speakers’ experiences on projects such as Nine Elms, TfL station upgrades and Crossrail, which are summarised below.

Current processes can also impede projects at delivery level – for example, on large sites it can be difficult to strategically provide utilities in a way that is fair (e.g. early developments pay for infrastructure costs while later ones get a free ride). Nine Elms on the South Bank has set up a special purpose vehicle to act as a single client representing ten developers, so it can work strategically with utilities providers.

Several speakers expressed the need for infrastructure projects to be linked to the broader needs and priorities of their areas, such as through urban realm improvements or integration into local regeneration plans. These should be individual to each area and project – in Whitechapel, a supplementary planning document was drawn up to help guide change accelerated by Crossrail.

With infrastructure projects getting ever larger, disruption for local residents and business can last months or even years. Proactive consultation at an early stage can inform mitigation strategies and reduce complaints further down the line.

Ongoing efforts to inform those affected by disruption about what is being done – and why – often go a long way towards reducing complaints. In Whitechapel, LB Tower Hamlets employed community liaison officers for each worksite to mediate between locals and Crossrail.

Sharing information internally can also help to reduce disruption through better planning. LB Southwark moved responsibility for all public consultations to a single specialist team. This has allowed for relevant information gathered on one project to inform other projects and carry over lessons learned.

All agreed that consultation methods have improved significantly in recent projects. Still, Duncan Brown of LB Tower Hamlets called for greater efforts to seek views from those who traditionally don’t respond to consultations or engage in the political process, especially as these groups are often among the worst affected.

Knowledge of much existing infrastructure can often be vague or incomplete, especially for pipes and cables laid up to 150 years ago. Surveys are therefore essential to establish exactly what lies below ground and to prevent any damage and delays.

While unexpected disruption to the surrounding area can never be fully avoided, having plans in place can help mitigate the effects.

At the same time, data sharing between projects can reduce the need for invasive surveys, providing a pool of data on what exists belowground for subsequent developments to draw on.

With relatively little of London’s ancient heritage visible, it’s important to record archaeological finds discovered while excavating. While archaeological finds often cause some delay, they represent a one-off chance to record historical knowledge that would otherwise be lost (one example is 19th century goods yards uncovered by Crossrail excavations in the Royal Docks). Clear policies on how to treat finds and good communications with site and project managers can reduce delays and costs incurred.

Listed buildings can also be put at risk by nearby construction. At Bank station, Alan Baxter & Associates have made plans for protecting nearby heritage buildings whilst works are carried out, with provisions to accommodate day-to-day use of the buildings. As with archaeological finds, assigning responsibility for risk in advance can reduce delays should any problems occur down the line. 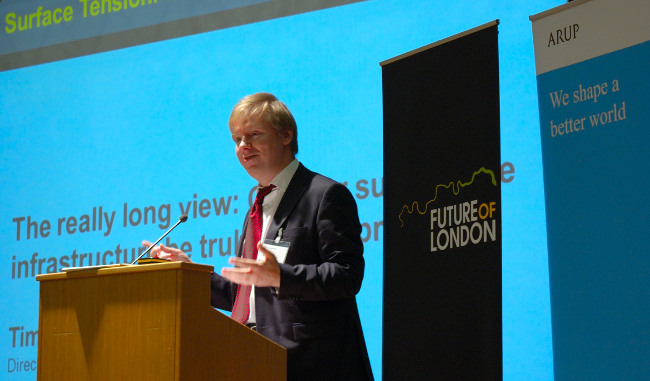 Speaking at the conference were:

Future of London’s work in the London 2050 series also includes the following:

We would like to thank Arup for sponsoring this event: