Delivering new infrastructure is critical to accommodating increasing demand on the transport network, but it can also be instrumental in unlocking development and regeneration opportunities across the Capital – the latter of which was the focus of our Crossrail as Catalyst report, released in April 2014. Crossrail is set to deliver on both of these aims, all while connecting four of London’s key commercial areas: Heathrow, the West End, the City and Canary Wharf.

In January 2014, Round 6 of our Future London Leaders programme visited Bond Street station to see how Crossrail was progressing at that station. On 30th October, this stream continued when the current round (FLL8) headed to Canary Wharf for their cohort’s first site visit. Arranged by Canary Wharf Group plc (CWG), the visit began with a tour of the Crossrail station before we headed to CWG’s marketing suite for a broader background of the area and its developments.

CWG was instrumental in bringing Crossrail to Canary Wharf, contributing £150m to the £500m station development. Like much of the area’s development, the Canary Wharf Crossrail station is built over water: this time in the North Quay. A 250-metre by 30-metre dam allowed the Fosters-designed station to be built top down, reaching a depth of 28 metres below the waterline. 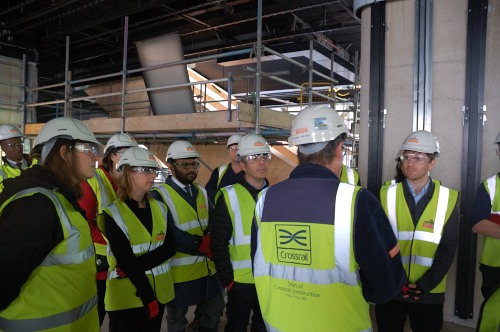 Michael Bryant, Operations Executive for Canary Wharf Contractors (Crossrail) Ltd, led the group on a tour of the station development from top to bottom: 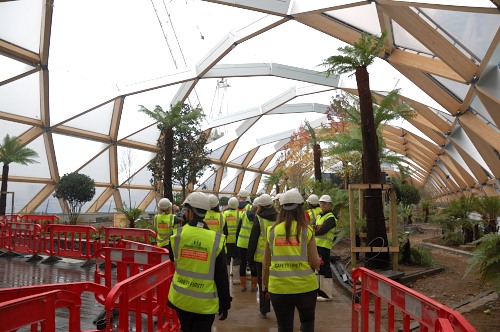 FLL candidates were impressed by project’s complexity – and how efficiently it is being managed. The station platform was completed five months ahead of schedule, allowing Canary Wharf Contractors to hand over the station box to Crossrail in May 2012.

After touring the construction site, we headed to Canary Wharf Group’s offices where we were joined by Dale Pile of CWG’s Public Affairs Team, who shared how the area has been developed over the past three decades. Previously a port, industry declined in the area until the docks closed in 1981. The public sector intervened to support the docks’ redevelopment as a major commercial centre, creating the London Docklands Development Corporation in 1981, designating the area as an enterprise zone in 1982, and delivering the Jubilee Line extension in 1999.

There have been major hurdles in bringing development forward in the area, notably the bankruptcy of developers Olympia and York Canary Wharf Limited in 1992. Despite being about equidistant from the City of London as the West End is, perceptions of the area being ‘apart’ from London’s business activity have also been a challenge; good transport links, including the impending arrival of Crossrail, have helped to remedy this.  A continuing misconception about Canary Wharf relates to its relatively quiet streets, a result of its extensive and busy subterranean network, common in many North American cities – and not a reflection of inactivity, said Pile.

These obstacles haven’t prevented Canary Wharf from being successful by many measures: more than 100,000 people now work in the area, and it has overtaken the City as London’s financial centre. The area continues to grow, with plans to expand eastward approved by Mayor of London Boris Johnson in December 2014. Though public sector leadership has played a significant role in the area’s metamorphosis, Canary Wharf’s development also illustrates the importance of private-sector partners willing to take the long view on investment. As public agencies look to new funding models to pay for infrastructure, organisations like Canary Wharf Group are likely to play an increasingly central role. 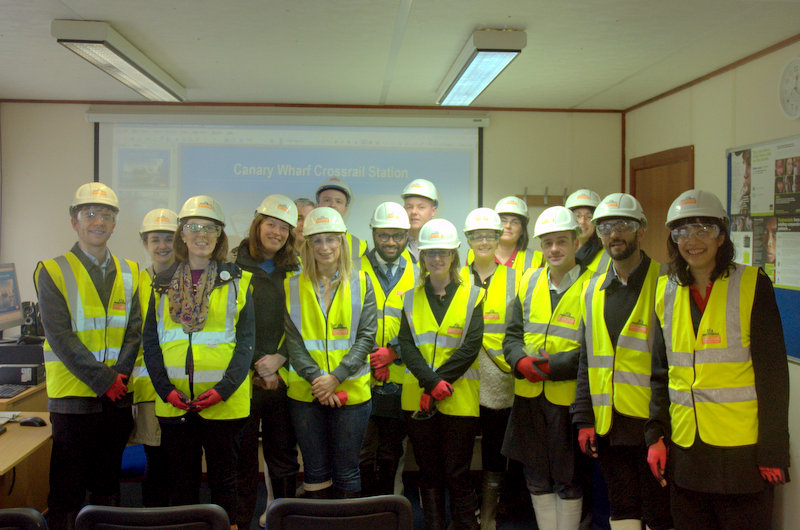