On January 14th, Future London Leaders Round 9 launched with a new ‘get-down-to-business’ format that got top marks from new candidates and returning mentors.

Sixteen candidates met for an induction which included a welcome from Visakha Sri Chandrasekera of long-time FLL sponsor Lovell, a programme overview from FoL director Lisa Taylor, a preview of the core Leadership Skills sessions from Urbancanda’s Andrena Cumella, and a taste of what to expect – and how to make the most of it – from Round 7 graduate Anna Bolsin of LB Waltham Forest.

Bolsin, serving as 2014-15 Alumni Rep together with LB Islington’s Karen Montgomerie, also outlined what the Alumni Network offers. Its networking evenings – for past and current Leaders – resume in March with an exploration of Housing Zones.

The second half of the event saw most of the 16 senior mentors and Urbancanda’s Miffa Salter join the group for a welcome, plus some shared thoughts on mentoring best practice and what both parties can gain from the relationship. Mentors also took their mentees through their first quick-fire presentation, on what leadership qualities a prospective London mayor should have. 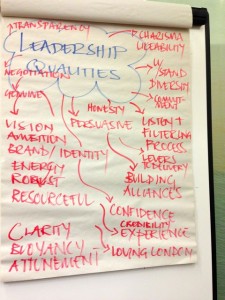 Salter told the group that everyone in the room has all the qualities they called for in some measure – if London’s next mayor has all of them in spades, we can all go home!

After some time for networking – joined by event hosts Lewis Silkin and Bill Murphy of Future London Leaders co-sponsor Re – the candidates wrapped the evening with a get-acquainted dinner.

They meet next on January 28th for a full-day Leadership Skills session. On the same day, Future London Leaders Round 8 meets for a networking session on the art and science of networking itself. Watch for a little extra spark across the Capital the next day…

Welcome to FLL Round 9 Candidates (details are here):

Welcome to FLL Round 9 Mentors (details are here):

Sponsored by Lovell and Re, the acclaimed Future London Leaders programme is exclusive to Future of London members. It has been designed to support and broaden the career development of promising practitioners across London’s public sector. Since its inception in April 2010, more than 130 candidates have graduated from the programme and its new senior-level complement, Leaders Plus. For more information, please get in touch via events@futureoflondon.org.uk.