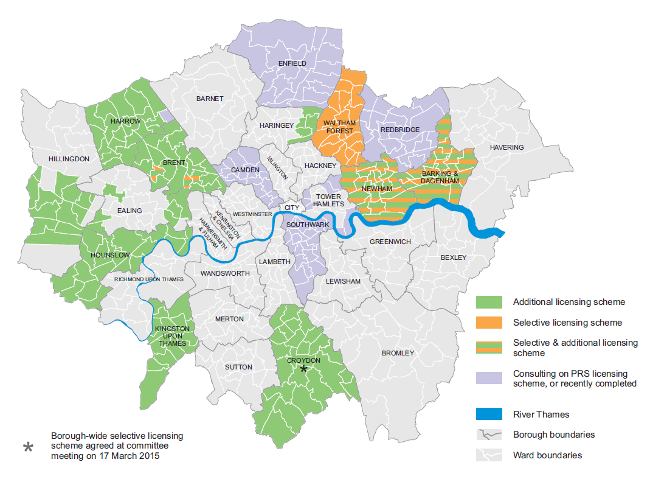 Hot on the heels of legislation that may significantly affect PRS licensing in London, Future of London’s new briefing, PRS Licensing - Policy and Practice is meant to help boroughs make sense of the shifting landscape of private-rented property licensing. The paper includes a summary of policy changes, as well as a step-by-step guide to planning and implementing a scheme.

While the Housing Act 2004 mandated local authorities to license all their larger Houses of Multiple Occupation (HMO), ‘additional’ licensing of other types of HMO and ‘selective’ licensing of all private-rented properties were introduced as discretionary at the same time, granting individual authorities the freedom to design licensing schemes appropriate to their area and wider housing strategy. Additionally, in 2010, all discretionary schemes were granted a general approval by CLG, provided local authorities could demonstrate why their scheme or schemes were needed, and that they had been sufficiently consulted upon.

In March 2015, days before the dissolution of Parliament, two key amendments were made to the legislation. On the one hand, eligibility criteria were widened, encouraging local authorities to implement schemes. On the other, restrictions were made to the general approval, preventing local authorities from implementing borough-wide selective licensing schemes without the prior approval of the Secretary of State.

Both changes are significant for London. Previously, a discretionary scheme had to be founded on either low housing demand or a prevalence of anti-social behaviour (ASB) in the PRS. As low housing demand is unlikely to be a factor for any part of London, boroughs could only design schemes targeting ASB. The additional criteria of a high proportion of PRS, in conjunction with poor property conditions, large amounts of inward migration, high levels of deprivation or high levels of crime, are better suited to London’s housing market and conditions.

But the restriction of larger selective licensing schemes will come as a blow to the boroughs who have consulted on such schemes, or who were intending to do so. Newham, Barking & Dagenham and Waltham Forest are all implementing borough-wide selective licensing, and Croydon won cabinet approval for its scheme just before the law changed. All four of these should be able to see their five-year programmes through. But those at an earlier stage of the process will have to rethink if their selective scheme doesn’t meet the 20% rule – i.e. if it covers more than 20% of the borough or affects more than 20% of properties.

In a time of scarce resources, this level of activity demonstrates the strong feeling across London that more of the PRS than just large HMOs must be better managed. The latest local authority housing statistics suggest that, of the 185,000 HMOs in London, just 12% are licensable under the mandatory scheme. Further, as it is widely acknowledged that there is a small section of criminal landlords who deliberately exploit vulnerable tenants, as well as a large proportion of non-professional landlords who are unaware of their responsibilities, the case for a wider policy response is clear.

But the same resource restraints make maximising the benefit of any licensing scheme a challenge, as they need to be accompanied by rigorous enforcement to work best. With local authority budgets unlikely to increase over the next few years, we must ask whether a borough-by-borough approach is the most efficient way to improve the management of the PRS – and ultimately raise standards for tenants – or whether a pan-London or national approach could accomplish more.

Future of London will continue to explore licensing and other measures in 2015 and beyond, as part of our wider PRS research programme, supported by Oak Foundation and Trust for London.