In November 2013, London mayor Boris Johnson announced his intention to establish Housing Zones as part of a package of measures to increase housing delivery in the Capital. The 2013 draft London Housing Strategy highlighted the gap between supply and demand, and proposed new policy tools and funding to meet the shortfall.

Bidding for Housing Zone status was opened in June 2014, and in February 2015, the first of 20 zones were announced, covering almost 2,000 ha in nine boroughs. Two more designations followed in March, with nine more expected by summer 2015. In total, the zones are expected to deliver 50,000 homes by 2025. 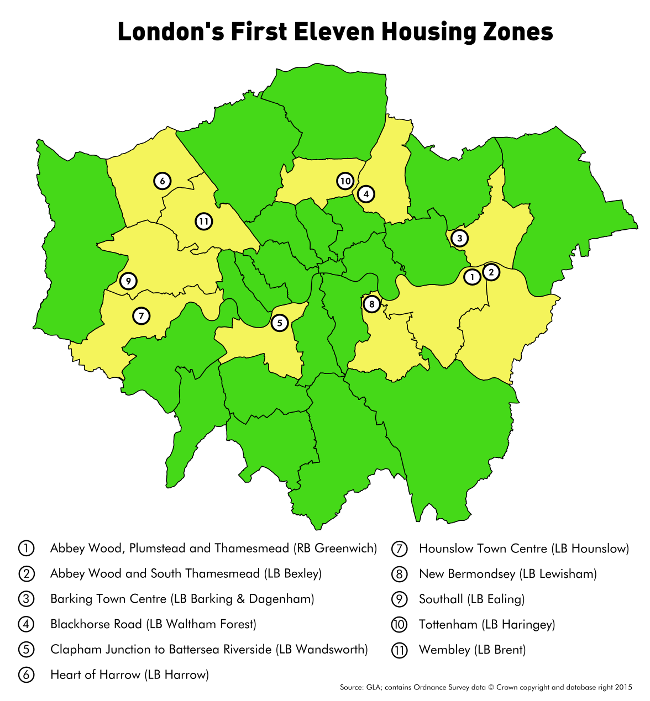 The zones differ from each other in character, size, capacity and barriers faced. This variety – along with the GLA’s flexible approach to funding – has meant a wide range of proposals, each tailored to the specific conditions on a particular site rather than to generic criteria. The accepted bids show an array of approaches to unlocking development, from transport and access improvements to land assembly, and infrastructure provision to remediation work.

As part of a new Future of London workstream assessing housing and planning tools, we’ll look at six housing zones, highlighting best practice, innovative methods and transferable approaches to accelerating delivery – and finding out how these ambitious programmes are playing out on the ground. Throughout the year, we’ll release case studies featuring input from senior stakeholders, and these will then be collated into an expanded and updated print/online report.

As part of the project, we’ll be assessing Housing Zones’ place within broader housing policy, and seeing what lessons might be learned for improving housing delivery more generally across London.