On 15th April, we held our first field trip exploring the relationship between anchor institutions and regeneration in Wembley (LB Brent).

The original Wembley stadium was built for the British Exhibition of 1924 and was replaced in 2007 with a new 90,000-capacity stadium on the same site. The stadium is surrounded by the 85-acre Wembley Park development led by Quintain, which bought the land in 2003. The area includes the Grade II-listed Wembley Arena and Brent’s new civic centre, completed in 2013.

In January 2015, Brent published their Wembley Calling vision document, which sets out plans for growth and intensification in Wembley, with a target of 10,000 additional homes and 10,000 more jobs by 2025. 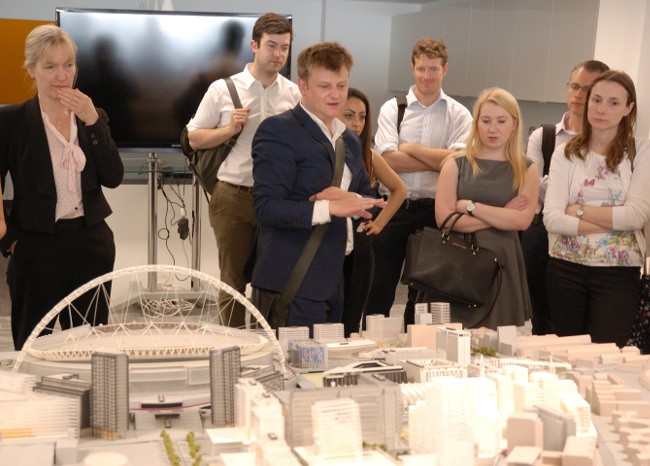 Alex Hearn, Regeneration Manager for Wembley at LB Brent stressed that Wembley is central to the borough’s growth plans, with 40% of the borough’s housing targets to be met in the area. As the area around the stadium was previously used largely for industry, the Wembley Park development represents a large net gain of housing, with permission granted for 5,000 homes.

Wembley has always attracted large numbers of visitors on stadium event days, but it has been hard to convert this into benefit for the local economy, with football fans not allowed to stay near the ground after matches because of public safety concerns.

Since opening in 2013, Quintain’s London Designer Outlet has brought about a decisive change: the shopping centre now brings in more visitors per year than the stadium, and shoppers are more likely to spend time and money in the area as part of their visit.

Anne Clements, Senior Planning Manager at Quintain, noted that during the early days of the development, Brent’s civic centre was crucial in driving footfall to the LDO, which is now a major pull in its own right.

Both Hearn and Clements agreed that the stadium has allowed development at higher density and larger scale than might be expected otherwise, given Wembley’s location.

While Wembley has three rail stations, they have been poorly linked until recently. With the exception of the listed Wembley Arena, existing buildings between Wembley Park and Wembley Stadium stations were demolished and a new road layout implemented which provides a clearer path between the two. 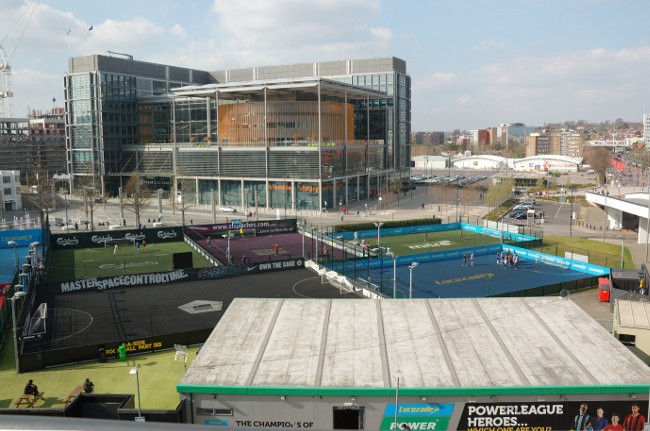 Quintain controls and maintains the public spaces in Wembley Park, as well as many of the roads. With such a large site and timescale, temporary uses have been arranged to encourage activity: the developer has provided football pitches, a landscaped park and a children’s playground on land that will eventually be used for further mixed-use development.

Outside Wembley Park, shops on the nearby Wembley High Road have suffered since the relocation of several large council offices to the new civic centre, but signs are that this is starting to change, with more active shop fronts appearing. The council has worked with Meanwhile Space to bring empty buildings back into use as temporary workspace and studios, through the Coming Soon Club. CSC has occupied two empty buildings which are now coming back into use, and is set to return again in summer 2015.

A partnership with the RSA’s architecture course gave students project space in return for input into the masterplan for the Wembley Triangle area; and meanwhile spaces allow the council to engage groups who might be difficult to reach through traditional consultation methods.

Brent also intends to use funding from the GLA’s High Street Fund and Housing Zones to support renewal along the high street.

Linking the high street to Wembley Park is an important aim for the council; a decade-long CPO process for a site between the two areas and a difficult station upgrade have made progress slow, but Quintain is submitting new plans which should eventually bring the area into greater use and provide the much-needed link. 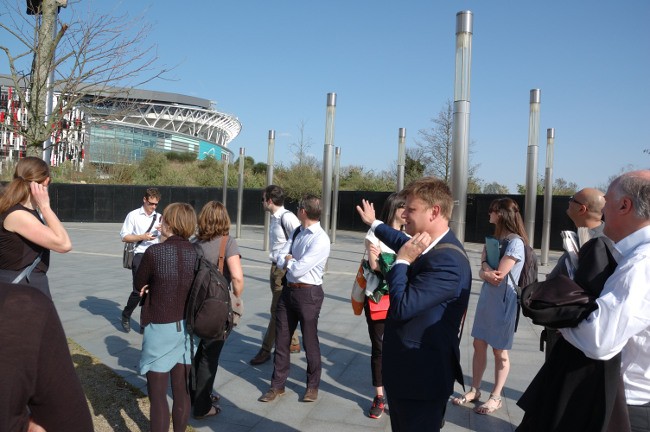 Summarising the results of the London Assembly’s recent report on stadium-led regeneration, Jo Sloman, Scrutiny Manager for the Assembly’s regeneration committee, added that development around stadiums is becoming more evident across London, often with a strong regeneration component. The assembly’s report identifies best practice and calls for greater alignment of plans between councils and stadium-owners, with the Mayor in a co-ordinating role.

While Wembley benefits from having a single large landowner with which to co-ordinate development, the council has also been proactive in creating comprehensive plans for the wider area, looking at how to spread the benefits of development. As the home of the national football team, Wembley will always attract visitors, but recent diversification into retail and leisure provides more opportunities to attract visitors outside of stadium events.