With the General Election results likely to quell debate on national rent regulation for the time being, London’s attention shifts towards next year’s mayoral elections. A number of contenders have stated that helping London’s private renters would be part of their campaign, but it remains to be seen whether the final candidates – and eventually the new London mayor – will put reforming the PRS on their agendas. 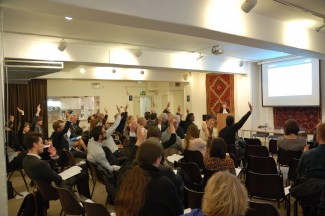 With this in mind, on 14th May, Future of London held a seminar on rent stabilisation, with an audience that included a number of mayoral  contenders, as well as practitioners from across London.

Head of Housing Policy and Strategy, London Borough of Hackney. Together, they addressed a number of issues, including:

After an audience poll found almost unanimous agreement that some kind of increased regulation for London’s PRS would be a good thing, John Bibby gave an overview of the principles of rent stabilisation. Whilst admitting that the lighter-touch, ‘third-generation’ measures proposed by Labour – i.e. where rents can still be increased between tenures – would not solve the problem of affordability, he argued that the value of the greater degree of rent certainty should not be underestimated.

Christine Whitehead drew on some of her extensive research of international examples of rent stabilisation. She explained that it is difficult to transfer experiences from one cultural or economic situation to the next – context is everything. On the other hand, many European cities share the problem of rising house prices, which often leads to rapid growth in the PRS. A good regulation system can be an effective way to manage this growth, but it needs to be within a clear-cut legal framework, and be well-communicated to all parties.

Finally, Nigel Minto gave a borough perspective on the role of rent stabilisation in improving the PRS. He saw the potential for offering greater   certainty for tenants through longer-term tenancies, even if the policy also involved higher initial rents. But he stressed the importance of a wider   housing investment strategy for London, and of revisiting the 50 separate PRS-related Acts of Parliament, in order to provide clarity and make it work for everyone.

A wide-ranging discussion ensued, of which the main points were:

Summing up, there was general agreement amongst the panel that rent stabilisation could be part of the solution to London’s housing problems, but any intervention needs to be as simple and transparent as possible, and should be part of a wider PRS ‘offer’ that supports all parties – tenants, landlords and investors.

This seminar was part of Future of London’s three-year research programme, Engaging with the Private Rented Sector, supported by Oak Foundation and Trust for London. The programme is focusing on how the public sector can better engage with the private – landlords, developers and tenants – both to realise improvements in housing standards for current tenants, and to foster a successful PRS in the long term.

Presentations and podcasts from the seminar are below. To engage with us on this programme, please get in touch with joanna@futureoflondon.org.uk