On 28th May, Future of London visited Whitechapel as part of our Communities in Transition field trip series, to hear about the impact of the life sciences sector in the area and broader plans for regeneration and development.

Just outside the eastern fringe of the City of London, Whitechapel is a thriving area in its own right. A long-established street market sits alongside a busy university, library, mosque and art gallery, while the Royal London Hospital is the largest in Europe.

But the area is not without its challenges: the area scores poorly on deprivation indexes, lacks open spaces for its young population, and is divided by a large, busy main road.

Starting at the Ideastore– London’s second busiest library after the British Library – attendees were given an overview of Whitechapel’s characteristics, before moving on to a space outside the Royal London Hospital which is slated to become a new public square.

Tower Hamlets intends to move its main council offices into a listed former hospital building between the new hospital and the high street, giving it a greater presence in Whitechapel and making access to council services easier for local residents and businesses. The new square will provide a new public space and a link between the town hall and hospital buildings.

Duncan Brown, Whitechapel Strategic Project Manager, LB Tower Hamlets and Anna Sinnott, Director of Planning at BDP, presented the Whitechapel Vision masterplan, highlighting the ambition for the Whitechapel district centre to expand by up to 50%. This will be supported by the opening up of the area behind Whitechapel station once Crossrail works are complete and a new station entrance is opened. Other strategic sites include a former Royal Mail sorting office and land owned by Sainsbury’s. These sites will deliver a mix of housing, retail and leisure uses.

Much of the opportunity in Whitechapel comes as a result of the new Royal London Hospital. Completed in 2012, the new building condenses the facility onto a smaller site, freeing up surrounding land for redevelopment. 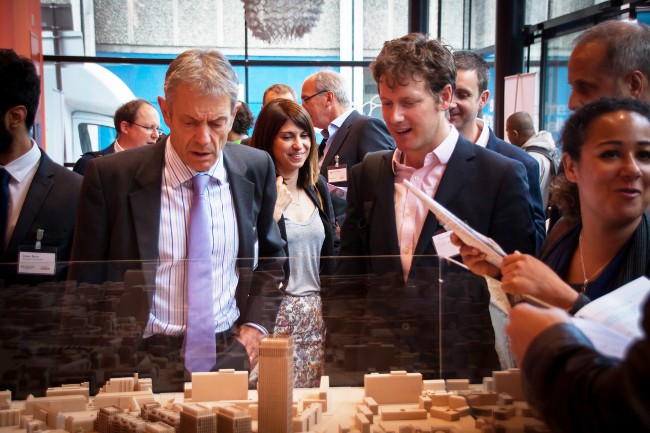 Professor Simon Gaskell, President and Principal of Queen Mary University of London, noted that with the presence of clinical and research facilities, this presents the ideal opportunity to expand the life sciences sector. Queen Mary’s nearby Bio Innovation Centre already hosts research labs which work in collaboration with Barts Health NHS Trust, for example on cutting-edge genomic research.

Expanding on the growth of the knowledge economy in London, Martyn Saunders, Associate Director at Bilfinger GVA, presented recent research and noted that Whitechapel is a microcosm of London in this respect, offering the key ingredients of public sector support, business & institutional anchors, good transport links and digital infrastructure.

Professor Gaskell suggested that co-location of clinical and research facilities could also have important benefits for public health in Whitechapel, a key priority for Tower Hamlets council. Public health practitioners are working closely with the Whitechapel delivery team to embed health outcomes into the regeneration process. They have targeted a broad range of public health outcomes, influenced by the Marmot Review, which emphasise social inclusion and empowerment as well as physical health.

Whitechapel already has high levels of cycle traffic, but the council also wants to make the area more walkable by improving the public realm and introducing new green spaces to address the existing deficit. A Green Spine is planned, to provide a north-south cycling and pedestrian route between Commercial Road and Whitechapel High Street, linking the proposed new town hall with a number of existing and planned public spaces.

Alongside public health, speakers stressed the importance of providing affordable workspace in the area, to provide opportunities for locals and for small businesses priced out of central London. Stewart Murray, Assistant Director of Planning at the GLA, showcased the City Fringe OAPF, which focuses on providing space for London’s expanding technology sector as it grows out from Old Street and the City, linking sites across Tower Hamlets, Hackney and Islington.

Tower Hamlets has also been awarded funding through the GLA’s High Street Fund to provide affordable workspace in buildings awaiting redevelopment – bringing vacant buildings back into use and maintaining activity at street level.

With the Mayor of London backing the life sciences sector through MedCity, Whitechapel is well-placed to take advantage of growth in this sector. Its location within the London-Stansted-Cambridge Corridor, the presence of specialist institutions and the drive to provide SME workspace lend weight to co-location benefits. At the same time, planning frameworks provide a mechanism to maximise public benefit from increased development activity and support the council’s public health and employment initiatives.

Speaking at this event were:

This event was kindly hosted by Queen Mary University of London