Croydon is London’s largest borough by population, and is expected to grow by another 15-20% in the next 20 years. Designated as an Opportunity Area in the London Plan, Croydon’s 2011 series of town centre masterplans laid the ground to increase residential density in the traditionally office-dominated central area, with capacity for 7,300 homes.

In the 1960s, Croydon town centre was transformed with a boom in high-rise office building. Much of this office space is now under-occupied or in poor condition; redevelopment of some of these sites presents an opportunity to reshape the town centre to be more responsive to current lifestyle and business trends.

Tim Naylor, Head of Spatial Planning at LB Croydon, led the group through some of the masterplan areas, highlighting schemes coming forward in East Croydon (Ruskin Square, Boxpark) and sites elsewhere with potential for redevelopment, such as the council-owned multi-storey car park in Fairfield.

As well as the five masterplans covering distinct character areas within the Opportunity Area boundary, the council has been implementing its Connected Croydon strategy, to address access and severance issues caused by the heavy transport infrastructure in Croydon. Two rail lines and large roads make walking and cycling difficult in parts of the town centre, and work is ongoing to upgrade the public realm and improve pedestrian links between the transport hubs of East Croydon and West Croydon stations.

The council is also exploring ways to take a more proactive role in regeneration, for example by establishing a council-owned development company or setting up a revolving infrastructure fund.

The Whitgift Centre has been an important feature of Croydon town centre since it was built in the 1960s. At the time, it was a cutting-edge retail centre and led Croydon’s 60s high-rise growth. However, the Whitgift’s retail-heavy offer is now seen as limiting as it doesn’t provide many of the leisure uses expected of shopping centres.

From the ninth floor of the Whitgift Centre’s Central Tower, Carolyn Kenney, Assistant Director of Retail Development at Hammerson, outlined plans to redevelop the centre into a new mixed-use development, combining retail with broader leisure uses, community space and housing. 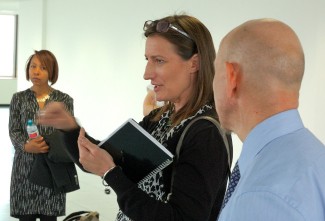 The site will be jointly developed by Westfield and Hammerson, who formed The Croydon Partnership in 2013 as a 50-50 joint venture. The addition of leisure and housing to the traditional retail offer is intended to extend the appeal of the centre and increase footfall, especially outside of retail hours. As part of the council’s access strategy, a 24-hour pedestrian route will pass through the development, allowing a link between Croydon’s two stations.

While development and investment are coming forward, a key issue remains negative perceptions of Croydon, stemming in part from the 2011 riots. Matthew Sims, CEO of Croydon Business Improvement District, spoke about how his organisation is working to improve public safety in the town centre by funding extra police, and to enhance the area’s look and feel through public realm interventions and street cleaning programmes.

From the Whitgift, we moved on to Exchange Square, where Matthew McMillan, Head of Inward Investment at LB Croydon, spoke about the recent growth of the tech sector in the borough. The town centre’s abundance of office space means that start-ups can access workspace that is cheaper and more flexible than what is on offer in central London.

Croydon council is looking at how to support this growth, both through business support services and through provision of specialised workspace; a council-run incubator unit is planned. In 2012, the council implemented a business rates-reduction scheme for SMEs located in the town centre, offering up to a 65% reduction in rates. Since then, the scheme has been extended and now offers up to 100% rates relief over a two-year period.

With excellent transport connections and flagship developments accompanied by an influx of tech talent and concerted efforts to improve the experience of public spaces, it seems Croydon is finally shaking off its 1960s image.