At least half of London’s population lives in flats, and the city also has a significant proportion of the country’s Houses in Multiple Occupation (HMO) than the rest of the country. Both are essential parts of London’s housing mix, but quality is not assured, and the age, high number of flats and prevalent conservation areas all hamper improvements. This situation cannot be ignored, particularly due to the growing number of vulnerable people in the PRS.

This is the second article in the series Making Sense of London’s Private Rented Sector, a data-driven look at the patterns and shifts in London’s PRS and what they mean going forward. This week’s focus is issues around the dominant housing stock.

Most of London’s PRS property is old

According to Housing in London 2014, 57% of London’s homes were built before the Second World War, and the homes that survive from this period are now predominantly owner occupied or private rented. A significant proportion of London’s PRS stock was built between 1850 and 1944 [figure 2a].

There is a clear link between the age of properties and levels of decency. Older stock gets tired, draughty and damp, and old heating systems become inefficient and unreliable, often requiring significant investment to refurbish and retrofit. Failure to do so leads to increasing numbers of homes that are damp, badly-insulated and in a poor state of repair. The private rented sector in London comprises more EPC F-rated properties than any other tenure.

It is no surprise that both nationally and in London, social-rented accommodation, owned by large-scale landlords with a social imperative, has a considerably higher proportion of decent homes than the PRS, thanks to sustained investment in retrofit, such as the 2011-2015 Decent Homes programme.

Fig 2a London housing stock by age band and tenure 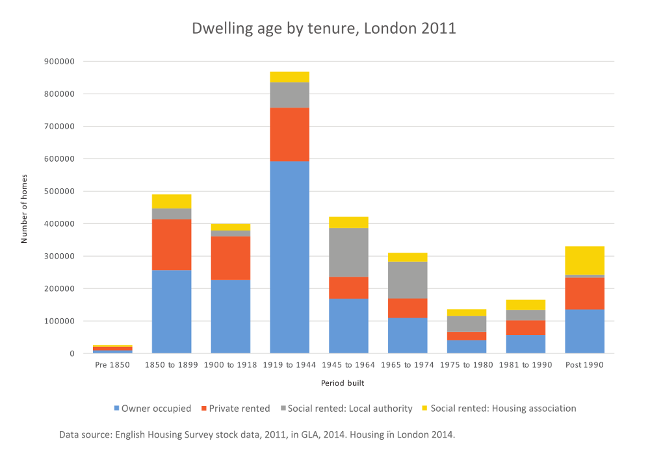 The latest English Housing Survey found that 80% of England’s housing stock is houses, with the remaining 20% in flats (including converted houses). The picture appears to be very different in London, where half of London households are in flats. In the private rented sector [figure 2b], this rises to 72%.

Figure 2b: Flats and houses in London and the rest of England 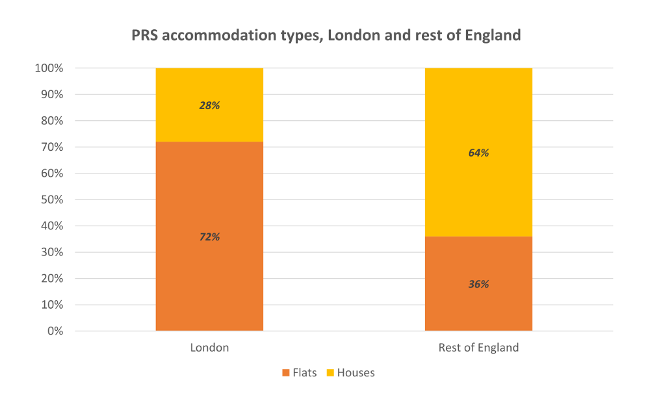 The prevalence of flats compounds the issue of ageing stock – flats are notoriously difficult to make improvements to, legally and logistically. Challenges associated with improving flats include the issue of not owning the entire block. A housing estate in need of repairs may comprise a mixture of social-renting tenants, leasehold owner-occupiers and private tenants renting from a leaseholder. There are particular legal challenges associated with leasehold contracts, which are said to be inconsistent and not always clear about occupiers’ rights.

The order of magnitude in terms of total numbers of flats is roughly similar to the ranking of PRS size per borough. Inner London has more flats than outer London more generally, reflecting the higher demand for high-density living in inner London. In 2010, Westminster’s Strategic Housing Market Assessment  estimated that 90% of its housing stock was flats. This is in marked contrast to the 20th century wave of suburban house-building in outer London.

A lot of London’s PRS is in conservation areas 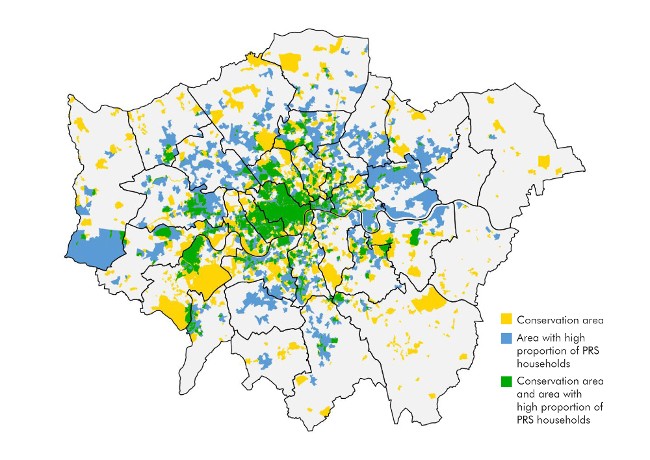 Many PRS flats in London are not purpose-built

The term ‘flat’ covers very different building types – from low-rise or high-rise purpose-built blocks to terraced houses that have been converted into a number of separate dwellings. In London, 30% of flats are conversions as opposed to being purpose-built. Proportionally, the rest of England is similar, at 26%. This is probably not surprising, as the rest of the country has more houses to convert. 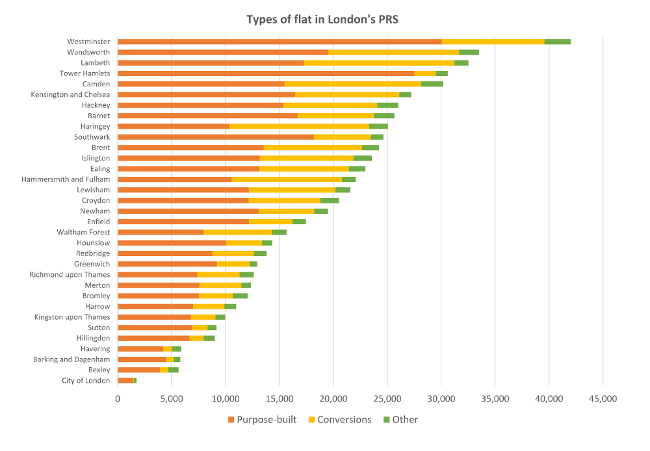 Conversions can be problematic, if executed poorly or space standards are not maintained. A lot of the problems with an ageing property will be intensified by the additional strain of housing three households as opposed to one, and from the local authority perspective, more households will be endangered by poor conditions.

Other conversions have been into Houses in Multiple Occupation (HMOs). There are a number of types of HMO within the definition, but the key difference to regular conversions is the sharing of kitchen, bathroom or toilet facilities. HMOs are not fully self-contained, making them cheaper than regular studio or one-bed accommodation. As London’s population grows and supply fails to keep up (see previous post), and with London’s overall affordability problem, appetite for HMO accommodation will grow.

HMOs are also popular from the point of view of many landlords: maximising separate dwellings within in one property and reducing bathroom and kitchen fit-out and maintenance is bound to mean an increase in rental yield. But this point of view can lead to poor quality. Evidence of health and safety issues with larger HMOs led to national mandatory licensing, which has been in force since 2006. However, a lot of conversions happen under the local authority’s radar: Newham’s additional and selective licensing drive has unearthed far more HMOs than originally estimated.

The number of HMOs in London is growing

The Communities and Local Government (CLG) Local Authority Housing Statistics Report 2013-14 suggests that in that year there were at least 195,230 HMOs in London – over 10,000 more HMOs than estimated in the previous year. As already explained, these are likely to be low estimates, suggesting that the problem is far more grave. 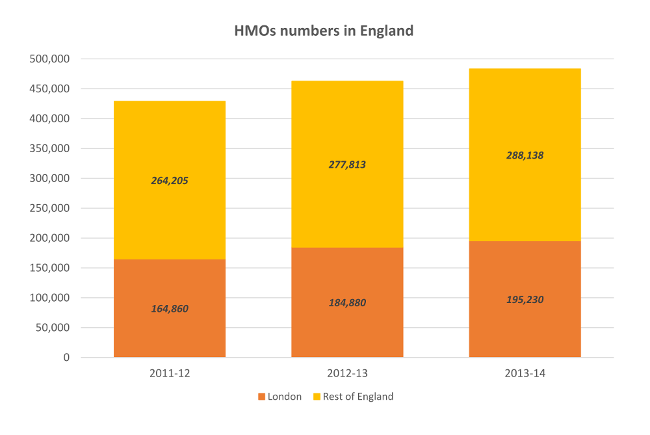 The highest concentrations of HMOs by borough [figure 2e], are clearly in inner London, excluding City of London, Westminster and Kensington & Chelsea. It is notable that there are fewer HMOs recorded in Westminster, despite it having the highest numbers of PRS tenants, perhaps reflecting the bigger demographic mix of private renters there. On the other hand, Wandsworth, a more affluent inner London borough, has the third highest estimated number of HMOs in London. All of these estimates should be treated with caution as they have been calculated in different ways. In any case, the appetite for HMOs – particularly in inner London – is indisputable. 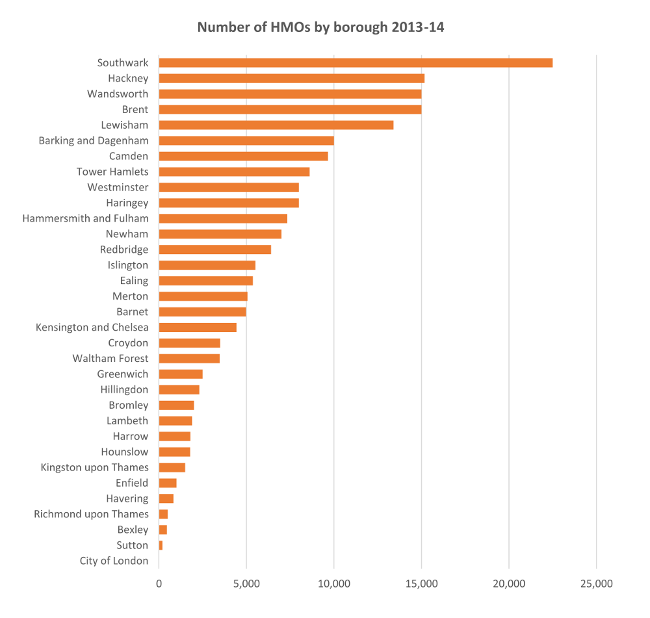 The majority of London’s HMOs fall outside the mandatory scheme

All local authorities are required to ensure that the larger HMOs are licensed to confirm that they meet basic safety standards. The evidence that led to mandatory licensing pointed to the particular issues that are rife within larger HMOs. But the increasing number of local authorities – in London and nationwide –  implementing additional licensing schemes  are building an evidence base of poor property management in the majority of HMOs that fall outside the mandatory scheme.

Of the 195,230 HMOs thought to be in London in 2013-14, only 11% are estimated to be licensable under the mandatory scheme. Of this 11%, just over a quarter have been issued with licenses. There could be a number of reasons why such a low proportion have been dealt with, including a shortage of borough housing officers to initiate and enforce licensing. Boroughs considering implementing a discretionary licensing scheme (our April briefing paper found around half of London boroughs to be implementing or consulting on schemes) need to form robust business plans to balance licence fee revenue with the additional resource required to use a scheme effectively.

PRS is the most over-crowded tenure in London

In 2011, the tenure with the most ‘bedroom standard’ over-occupation in London was the PRS – an average of 17% households do not have a sufficient number of bedrooms, compared to 16% in social-rented properties and 6% in owner occupation. There is a similar pattern nationwide, though higher levels of overcrowding in in London overall.

Looking at the proportion of overcrowded PRS households by borough [figure 2f], there is an inevitable pattern of less affluent boroughs being most affected by this. Newham and Brent have the highest proportions of overcrowding – the previous post in this series showed that the same two boroughs had the fourth and fifth largest numbers of PRS renters in 2011, surpassing other inner London boroughs. The fact that Westminster and Wandsworth are at the lower end of these rankings, despite having the highest numbers of private renters, is further indication of the great diversity of private renters found here.

Figure 2f: Overcrowding in the PRS by borough 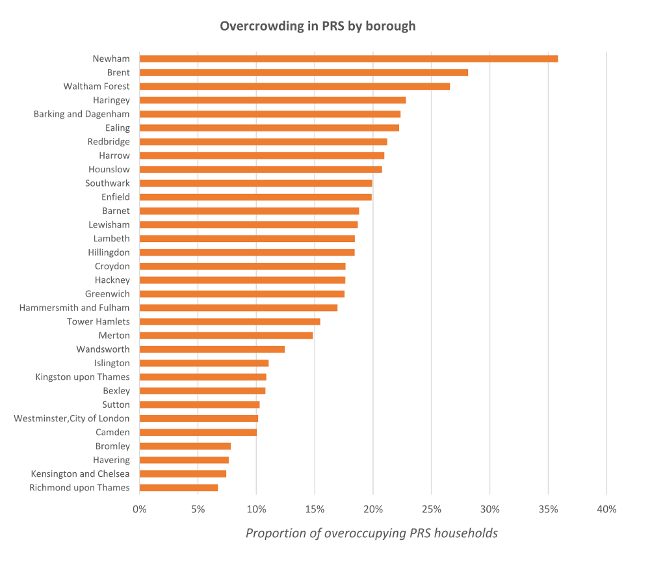 Regardless of tenure shifts, there are still a lot of PRS tenants in inner London, and in order to make their homes safe and comfortable, solutions need to be found where possible. These include planning guidance for conservation areas, such as LB Westminster’s, and facilitating area-based improvements, as is often done successfully in the social-rented sector, saving time and money.

The issues facing PRS stock in inner London are complex and difficult to get past. A large proportion of inner London’s PRS stock is old, tired and inefficient, and the high numbers of flats with their complex ownership and other legal and planning hurdles make improving the stock difficult, in conservation areas or not. As in the previous post, this points to opportunities for outer London to provide much-needed homes of all tenures for a growing London.

Boroughs will have to continue to make difficult decisions regarding overcrowding

PRS is disproportionately blighted by poor standards with significant problems in the growing HMO sector. Building new homes that are well-managed will be part of the solution, but this will take time. Further, even if the supply-demand market rebalances, low-income private tenants will often end up in accommodation that is overcrowded to the point of safety concerns, but is nevertheless a place to live. It is up to the individual borough to decide where and when to intervene, and how best they can prioritise limited resources.

Improving the management of properties and finding ways to ensure that landlords comply with the Housing Act – with both carrots and sticks – are also key, particularly when overcrowding is such an issue. Many boroughs have introduced discretionary licensing schemes, to address the number of HMOs exempt from the mandatory scheme. HMOs will continue to be a vital part of the housing mix, particularly for those on lower incomes. It is vital that boroughs inspect all the HMOs in their area and ensure that they provide basic conditions. If this is not being done through licensing, alternative strategies need to be in place.

For estimated numbers of HMOs, we used CLG local authority housing statistics – we compared 2011-12, 2012-13 and 2013-14 data. Local authorities are required to submit this data every year, but it is not clear whether local processes for gathering this data are consistent.