Not only is the cost of renting in London the highest in the country, it is also rising the most quickly. This puts all but the most affluent renters under a lot of pressure, and puts those in inner London and/or receiving benefits in an increasingly impossible situation.

This is the third article in the series Making Sense of London’s Private Rented Sector, a data-driven look at the patterns and shifts in London’s PRS and what they mean going forward. This week’s focus is on cost and affordability.

Given that the growth in the private rented sector is partly due to the reduction in households which are owner-occupying, any consideration of property affordability begins with the cost of homes to buy.

The median house-price-to-earnings ratio – i.e. how many more times the cost of a median house is than a median annual salary – is a recognised indicator of housing affordability. By comparing the ratio change longitudinally in different regions [figure 3a], we can see an increasing divergence between London and the rest of the country. 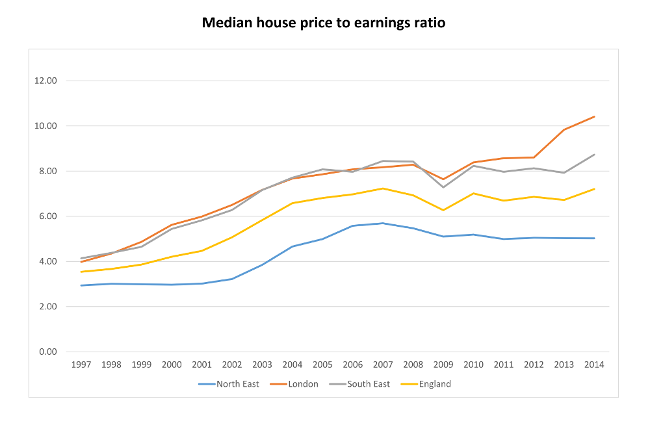 Returning to the rental market, it is common knowledge that it costs more to rent a property in London than in the rest of the country. But the gap is widening, as the rate of growth is higher in the capital as well; in 2014-15, the annual rent price rate of change was 3.2%, almost one per cent more than the next highest region, the South East. 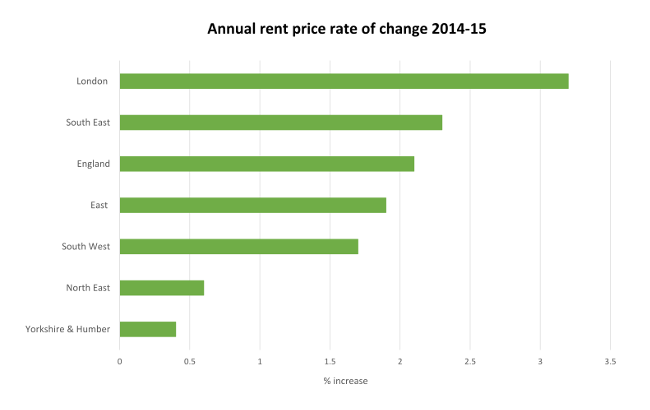 This is not reflected in the Local Housing Allowance cap

Housing benefit is usually paid directly to PRS tenants as Local Housing Allowance (LHA). A series of changes to Local Housing Allowance were made nationally in 2011, including the removal of financial support for 5-bedroom properties, and establishment of caps for different property sizes. This was followed by LHA rates being set at a 30th percentile of Broad Rent Market Areas (BRMAs), rather than the median, thus decreasing the number of financially viable properties for LHA claimants.

NPI predicted that people in more affluent areas and with larger homes would experience the biggest shortfall from the LHA cap: in the inner west of London, the average shortfall for a household renting a four-bedroom property would be £100 per week (figure 3c). The Outer East and North East have the smallest shortfall for all property sizes. This goes some way to explaining the influx of PRS tenants to boroughs in these areas. The four-year working-age benefits freeze from 2016-2020, which was announced in the 2015 summer Budget, will further increase the shortfall. 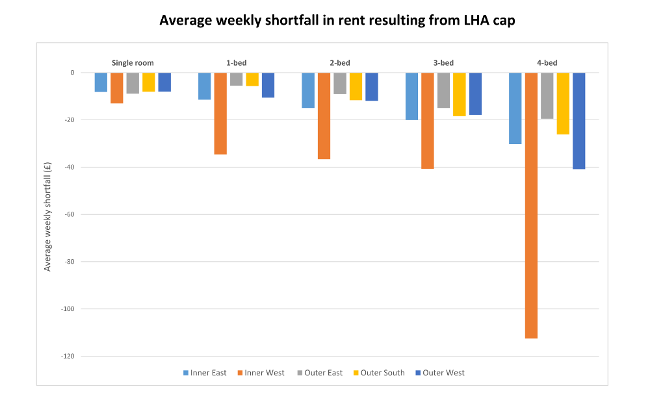 This corresponds with the changing geography of the PRS shown in the first post in this series. Further NPI research demonstrates the effect that inner London’s lack of affordability is having on outer London: while rents may be cheaper in outer London, if more than 30% of households in the PRS are claiming benefit, it is not feasible for them all to live in the 30th cheapest percentile of households (where the cap is set). Of the 16 boroughs in which this is the case [Table 3a], 15 of them (all except Lewisham) are in outer London. In Enfield, it is 56%.

Table 3a: Boroughs where over 30% of households are claiming LHA

The question of what an acceptable proportion of income to be spent on rent is not easy to answer, though it seems that, in comparison with Europe, the UK is very expensive. National Housing Federation reported that the average rent in UK is almost double that of the average for the European Union. In terms of what is an acceptable proportion of rent to earnings, Shelter suggested 35% of median to lower net income as a good indicator. The UK fares badly on this front as well, with an average of 40%, compared to a European average of 28%.

Looking at median incomes in the boroughs and comparing them with median rents [figure 3d], the average proportion of gross earnings is 38%. With net income, it would be even higher, although it is important to note that, although this is an accurate figure for earnings-related pay (i.e. including pensions and self-employment), it does not include benefits.

The rent to income comparison can also be viewed at borough scale, with predictable results: inner Londoners must spend more of their earnings on rent than those in outer London. With the exception of City of London, which has fewer renters than other inner London boroughs, and who tend to have high salaries, the highest proportion of income is spent on rent in Tower Hamlets (52%), where incomes are well below the London average, but rents are above average. Westminster and Kensington & Chelsea come second and third (both 49%) despite having the top two highest median incomes in London, due to their exceptionally high rental values.

Of the boroughs at the average of 38% or lower, only two – Wandsworth (38%) and Lewisham (32%) – are classified as inner London. But they are there for very different reasons: Wandsworth, as it has one of the highest median household incomes; and Lewisham, as its rental value is well below the London average. Kingston (23%) and Bromley (26%) present the most comfortable situation, where incomes are higher, yet rents remain below average, even for outer London. 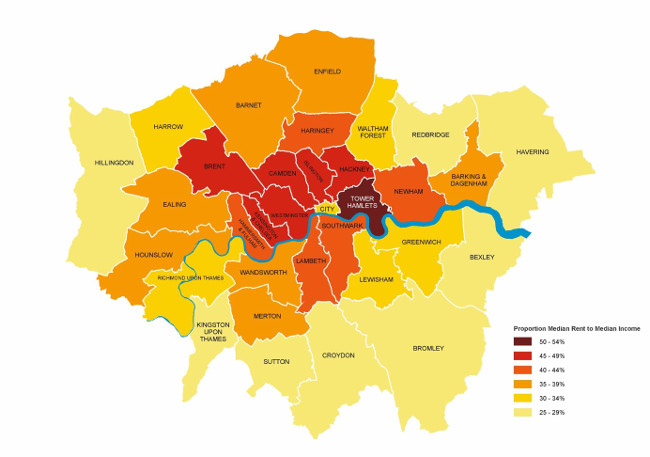 The London Living Wage (LLW) – currently £9.15 per hour – was established to take into account the considerably higher rental costs in the Capital, which explains why it is significantly higher than National Minimum Wage (currently £6.50, though the 2015 Budget included the announcement of a ‘National Living Wage’ of £7.20).

While the number of employers paying LLW is increasing, low pay persists, particularly in certain sectors, including retail and hospitality. It is important to note that the London Living Wage takes into account available benefits. If it did not do this, the rate would need to be considerably higher. 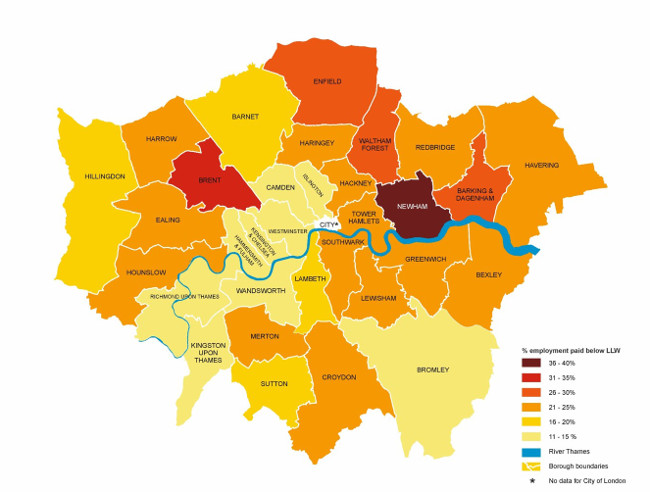 The problem of low pay appears to be lower in inner London, and lowest in the inner and outer West. This makes sense as these are more affluent boroughs. The boroughs with the highest number of low-paid jobs are Newham (37%) and Brent (32%) This does not mean the employment offered within these boroughs is low-paid; it is more a demographic indicator. The people moving into less affluent boroughs will be less affluent themselves, in lower-paid employment and claiming LHA to help pay their rent.

Inner west London will become increasingly unaffordable to those in the PRS on low wages, particularly families

Tenants in Inner West London already face the biggest benefit-to-rent shortfall after the LHA cap, and things are about to get much worse. The recent Budget announced a four-year freeze on working-age benefits, including LHA. This will widen the gap between benefits and rents nationwide, but affecting London disproportionately, as rents in the capital are rising at a faster rate. Families and other people requiring larger accommodation will be worst affected, often left with little choice than to move to cheaper parts of London or out of the city altogether. Homelessness is almost certain to increase – the next post in the series will considers London’s already high homelessness rate.

Outer London will see even an ever greater influx of households

Those in a position to will continue to move out to boroughs where rents are lower and the gap between LHA and rent prices is more viable. The four-year benefit freeze will put even more areas out of reach, increasing pressure on the most affordable boroughs.

The issue of rising rents is an acute problem for London, and one that will be increasingly difficult to ignore, particularly when coupled with the increase in vulnerable households in the PRS. Already, a number of candidates for the 2016 Mayoral election have declared an interest in the issue. Though the Mayor of London does not have the power to control rental values in any way, the successful candidate could choose to push for this power. Considering the number of private renters in the Capital, demonstrating a genuine awareness of the issues they face could enhance candidates’ credibility.