London’s population is growing at its fastest rate in Greater London’s history (i.e. since 1965). The first post in this Making Sense of London’s Private Rented Sector series showed that an increasing amount of this growing demand for housing is being met by the private rented sector, due to an insufficiency of social housing and unaffordability of housing to buy. This situation is pushing people into the PRS, many of whom are particularly vulnerable to the lower standards and tenure insecurity that are often found in private-rented stock.

This post will focus on two communities that are becoming more prevalent in the PRS: households with dependent children, and those requiring temporary accommodation. We have focused on these as they are both significant in the development of London’s PRS, and as there is available data on them. Other ‘at risk’ communities where more data is required are the ageing population (PRS is no longer entirely the domain of the young), and low-income migrants and asylum-seekers (who are even less likely to have access to benefits, or to the advice and support of local housing services, than others in the sector).

A – Households with children

Families raising dependent children require a stable home in which to do so, and small children are particularly vulnerable to the health risks associated with poor housing standards. A large part of London’s rapid population growth is the consequence of its birth rate, so it comes as no surprise that the growth in the overall tenure correlates with the growth in dependent children.

In 2001, these households were not evenly spread geographically, with the fewest in Islington and the most in Newham. The situation is the same in 2011, but the scale of growth has furthered the unevenness – in 2001, Newham had 5,000 more households with dependent children than Islington; in 2011, the gap had risen to 12,000. Figure 4a shows the changes by borough. 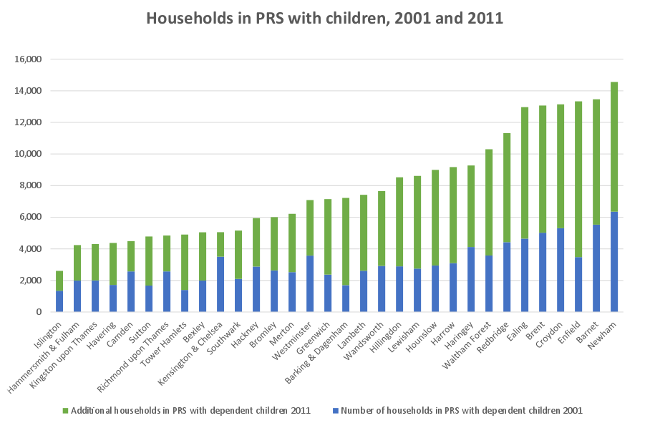 The biggest proportional growths correspond with the overall PRS growth patterns we explored in the first post on tenure: Barking and Dagenham has more than four times the number of dependent children households it had in 2001, and a further five boroughs’ numbers tripled. Such rapid growth leads to an increase in demand on a number of authority departments, particularly children’s services and education.

Table 4a: Top 5 biggest and smallest increases in PRS households with dependent children

In its current structure, the PRS poses two significant challenge for these households: the higher risk of health problems from hazards such as excess cold and damp; and the insecurity of tenure once a standard assured shorthold tenancy period ends (usually six or 12 months).

The correlation between children and low-quality housing is a public health issue. In 2006, Shelter conducted research into the consequences of poor housing on children’s health. Results included: “Up to 25 per cent higher risk of severe ill-health and disability during childhood and early adulthood; increased risk of meningitis, asthma, and slow growth, which is linked to coronary heart disease; a greater chance of suffering mental health problems and problems with behaviour, and lower educational attainment, greater likelihood of unemployment, and poverty.”

Notably, this is an issue for England, not just London. Citizens Advice Bureau and New Policy Institute reported that between 2003 and 2013 the number of PRS households doubled from 2.2 million to 4.4 million. Of these, it reports that over a million are families raising children.

Local authorities have a legal duty to house people who are eligible for assistance, and many vulnerable people – including households with dependent children – are classed as being in priority need. Due to dwindling supply of councils’ own housing stock, local authority housing departments are often reliant on the PRS to provide temporary accommodation (TA).

While the rising number of children in the PRS is a national health issue, most recent figures suggest that over three quarters of England’s homeless households are in London.

London has over three quarters of England’s homeless households

In 2013/14, 39% of London acceptances into TA were due to ending of an assured shorthold tenancy – the standard tenancy agreement between tenants and private landlords. This is an increase of 17% in the same quarter last year. 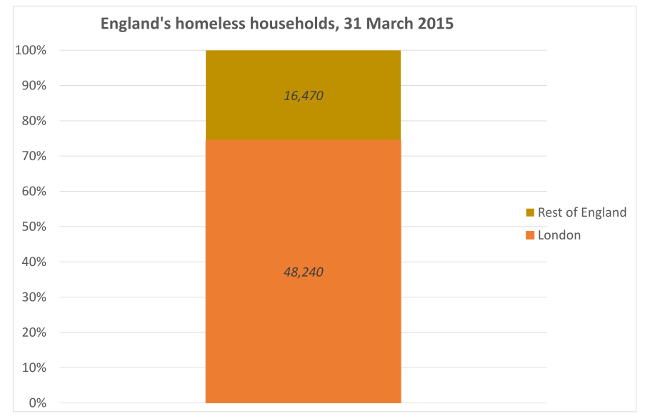 London boroughs are extremely reliant on PRS for TA

Comparing the make-up of TA stock in London the rest of England at the end of 2014-15 presents a stark contrast. At the end of 2014-15 a third of households in England (excluding London) were being housed in local authority or housing association (HA) stock. Bed and Breakfast accommodation (B&Bs), hostels and non-leasehold PRS comprise around 15% each [figure 4d].

In London [figure 4c], which is housing three times as many households in TA than the rest of the country, over three quarters are in the PRS. This could be through councils leasing from landlords – referred to as PRS leased – or other agreements with individual landlords. Only around 10% are in council or HA stock. 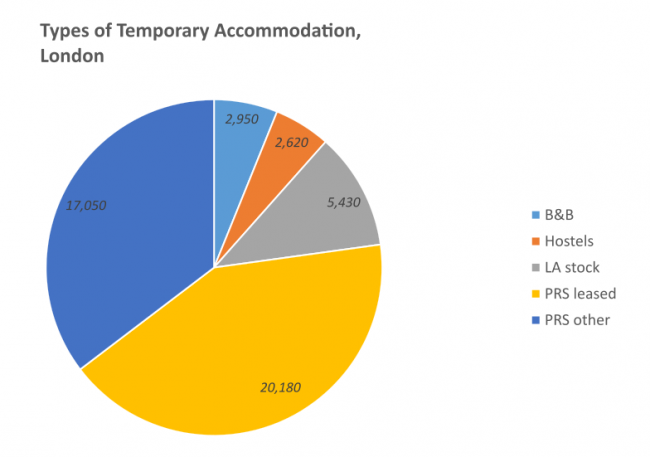 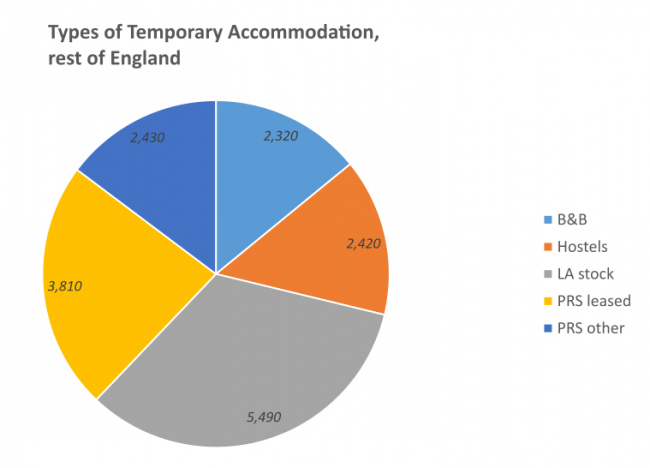 Although TA should only be a temporary solution, it needs to be safe, comfortable and offering reasonable and appropriate levels of privacy. It should also be cost-effective for the local authority, some of whom are housing far higher proportions of households in TA than others. Making use of a council’s own stock would therefore make sense, but London faces such high demand that council housing can only provide a small proportion of TA.

B&Bs are expensive for councils and clearly not established to provide homes. The over-use of B&Bs and their inappropriateness, particularly for some groups, has been the subject of many Parliamentary debates and policy interventions, but their usage continues to increase. On 31 March 2015, there were 5,300 households in B&B TA, 3,000 of which were in London.

With the volume of homeless people in London on the rise, boroughs find themselves increasingly reliant on the PRS for TA. Although this could be a better solution than B&Bs (in terms of cost and suitability), such an overheated market can lead to reliance on properties that are not of sufficient standard.

In the current housing market, and with the population growing rapidly, it is hard to see how the increase in households with dependent children living in the PRS will slow down. The link between housing and children’s health and education makes this a public health issue demanding a national policy response. Other consequences include educational disruption, decrease in attainment and the increased likelihood of living in cramped, unsafe conditions.

While there was little mention of the PRS in the Conservative’s general election manifesto, the current technical consultation on tackling rogue landlords and improving the sector (deadline for submitting views 20th August) suggests that the PRS has already moved up the policy agenda. Any moves in this area are likely to be tweaks to existing legislation, as opposed to wholesale change to the sector, but they could be helpful.

Increasing pressure on multiple local authority departments across the boroughs

The number of households with dependent children has increased across all the boroughs, in line with the growth of the sector as a whole. This puts enormous pressures on housing departments, but also on education, children’s social care and other services facing rapid growth in demand. As budgets decrease further, local authorities will need to consider innovative ways to manage this demand.

This is a problem facing London as a whole but, as with other PRS issues, many of the less affluent boroughs are having to cope with some of the biggest changes. All boroughs will be considering their strategies for working within an increasingly challenging fiscal landscape, particularly with another round of cuts coming later in the year.

Landlords may retreat from the TA sector

In London, the issue of providing sufficient TA to meet demand is growing. With the forthcoming benefits freeze, landlords could become more reluctant to rent their property directly to tenants for TA, as, unlike leasehold arrangements with the council, the rental income will not be guaranteed. This will further deplete the amount of TA available to local authorities for discharging their duty to homeless households. Councils will need to consider how they can meet this demand, such as through setting up council-owned housing companies, and incentivising landlords with suitable property to provide TA. This is a further reminder of the need for approaches to improving the PRS that suit all parties.