Chrisp Street market in Poplar (LB Tower Hamlets) is a long-running food and convenience goods market which is being used to anchor regeneration plans in the wider area.

On 24th September, we visited the area as part of our Communities in Transition series, to see how the market is being used to deliver regeneration programmes and hear about how it fits into current development plans for the area.

Active as a street market since Victorian times, it was given a purpose-built site in the 1950s as part of the Festival of Britain. The development in this era provided the template for the market as it is today, and also gave the market its iconic clock tower. 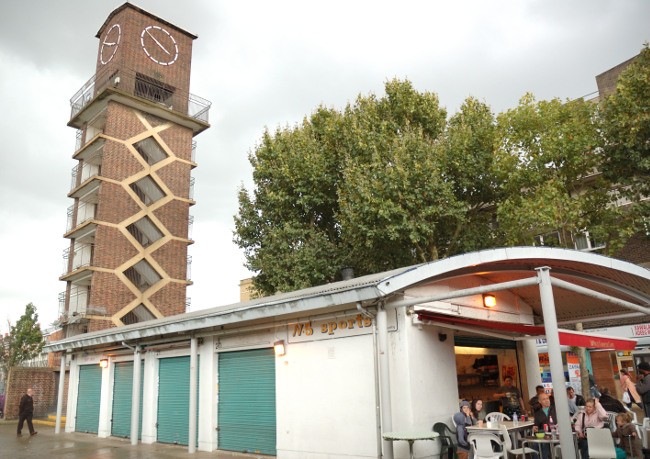 Over successive decades, more retail units were added, although infrastructure requirements were not addressed cohesively: today, lighting and service areas need improvement; street frontage is limited and connectivity through the area is poor, emphasising a feeling of disconnection with the surrounding area; and while busy during the day, the market lacks activity in the evenings.

Lying to the north of Canary Wharf, Poplar is expected to see significant development in coming years. Poplar Riverside was recently designated a Housing Zone and could see up to 10,000 new homes by 2025.

More directly, housing association Poplar HARCA has plans to redevelop part of the market with developer United House. The £300m project aims to provide around 750 new homes and upgrade the retail units, while keeping the market at the centre of the community.

Neal Hunt, Development Director at Poplar HARCA, outlined the plans: alongside the new housing, poor quality retail units will be replaced, and the market will be split into three areas: independent retail, space for the existing food market and an area for more typical high street shops and leisure activities, including a cinema.

As the market plays a central role in the community, it has been the focus for a variety of regeneration projects, seeking to address health inequalities, provide business support, and animate public spaces and drive footfall.

As part of the Portas Pilots programme, LB Tower Hamlets was awarded funding for an 18-month healthy eating project which ran from 2012-14. At the Eastenders’ Pie and Mash shop, Abigail Gilbert, Public Health Locality Manager, and Michele Sandelson, Senior Public Health Dietitian, spoke about work to encourage awareness of healthy eating with both traders and shoppers.

The programme gave free advice and training to traders and set up an award scheme to promote businesses which reduced fat and salt in their menus; a chef gave demonstrations in the market and dispelled myths about the food on offer (for example, that it was less healthy than food from supermarkets); and fresh food vouchers were made available to families.

Richard Caley, a resident and member of the Town Team set up as part of the Portas Pilot, noted that the programme had successfully brought together health and enterprise priorities, but that this level of coordination had required ongoing resources to be effective. 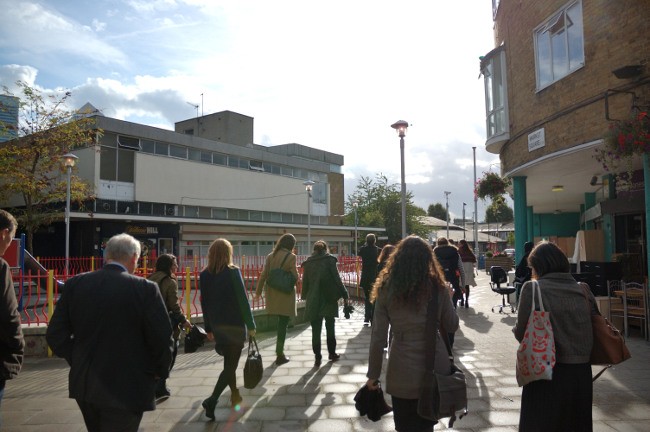 Within Poplar HARCA, the ACCENTS (Arts, Community, Culture, Enterprise, Tech and Sustainability) team supports local businesses by providing access to affordable workspace in and around Chrisp Street and free training and advice to local businesses.

Through its Open Poplar initiative, the HA catalogued underused spaces on its estate and opened them up to bids from individuals, businesses and social enterprises, who could receive subsidised space if their plans included activities to benefit the community.

In one of these spaces, Poplar HARCA has provided space in an empty retail unit to Somewhereto, a lottery-funded social enterprise which offers space and support to young people over the course of 12 months to help them develop creative, artistic, entrepreneurial and charitable projects.

Alongside the recently established Poplar and Bow Enterprise Network, the Exchange aims to build links between businesses and give them the tools to take advantage of increased investment in the area.

Paul Augarde, Poplar HARCA’s Head of Creativity and Innovation, emphasised that the housing association is aware of the risks that rapid development can pose to existing communities, and is working to mitigate these. The association’s ownership of most of the market allows development to be carried out in a co-ordinated way – especially important when it comes to keeping the market operational through construction works.

Successive regeneration projects have utilised the market as a way of engaging residents and traders in Poplar, focusing variously on health, culture, skills and training, workspace and business support. While the area is set to go through significant change in the decade ahead, it is clear that Chrisp Street market will remain central to social and economic life in the area and can act as an anchor around which residents and businesses – old and new – can engage.