The Packington Estate, in the east of LB Islington, is around half way through an eight-year, six-phase redevelopment programme. As part of Future of London’s ongoing programme, Delivering Estate Renewal, we visited the estate on 15th October to check in on the progress of this acclaimed project.

Built in the 1960s, in 2004 Islington council took the decision to redevelop the estate after discovering structural flaws. Residents were initially opposed to redevelopment, and during the consultation, came up with a list of priorities which formed the basis of the planning brief.

Among residents’ demands were that new homes should be larger than existing units, that existing residents should be offered canalside properties, and that residents not be decanted offsite.

Hyde Housing and Rydon developed a plan which took these desires into account, and in 2006, residents voted on a stock transfer to Hyde Housing, with 77% in favour on an 89% turnout (and 82% of leaseholders, on a 94% turnout).

Bernice Ramchandani, Head of Construction at Hyde Housing explained some of the ways Hyde has tried to reduce the impact of redevelopment on residents. These include: a rolling decant programme, so that residents only have to move once; bulk-contracting removal services for cost savings and convenience; and setting up a resident board to provide feedback and act as a conduit for information about the renewal programme.

Now in the fourth of six phases, almost all of the original residents have now been rehoused. When complete, the estate will contain 820 homes compared to the 538 previously on the site. Of these, 491 (60%) will be available below market rates.

Neighbouring communities were also consulted, with the result that other design and access issues could be dealt with during the redevelopment, for example, some dead-ends and alleyways were removed.

PTE partner Kaye Stout outlined other aspects of the new estate’s design, including the high number of 3, 4 and 5-bedroom family homes – 135 in total – and the fact that social and private apartments share the same design. The housing on the eastern edge of the estate has been modelled on the surrounding Georgian terraced houses, something both residents and neighbours were keen to see. 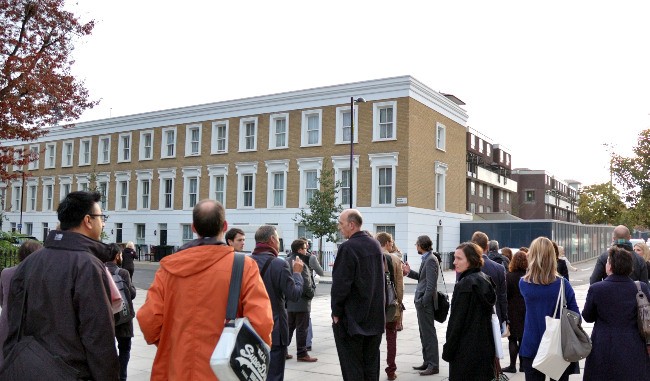 Mark Mitchener, Managing Director of Rydon Construction, emphasised the importance of keeping the same teams on the project throughout its design and delivery, to provide continuity of working relationships between delivery teams and stability for residents.

The redevelopment has already won several awards and been held up as a shining example of estate renewal. Tenure-blind apartments, the focus on family housing, the location of social-rented units by the canal, and careful integration into its heritage surroundings have all brought praise; Estates Gazette called the scheme ‘truly commendable’.

Speaking after the visit, David Lunts, GLA Executive Director of Housing & Land, commended the work being done on Packington, saying, “The Packington Estate is a shining example of how we can all work together to get everything right, from resident involvement through to building design. In an ever changing city, like London, it’s crucial that we continue to work in partnership to provide much needed and high quality housing.”