In 2015, the term ‘localism’ seems outdated; even in 2011 when the Localism Act was passed, little of the thinking attached to it was new. However, the roots of the current Devolution Bill – arguably the ‘new localism’ – can be traced back to the Coalition agenda, which comprised not only the Localism Bill, but also broad public service reform and an austerity-based approach to economic recovery for the UK.

In 2015, that combined agenda continues to buffet London local authorities: all are operating with significantly reduced grant and being forced to consider new revenue sources and ways of working that transcend old boundaries. The recent autumn statement declared a 56% cut in local authority grant over the next four years. While this will purportedly be partially offset by the retention of business rates – a property-led funding direction in which parts of London stand to benefit – an overall deficit remains.

At the same time, mayoral powers are being augmented, particularly around planning, to accelerate development. The Cities and Local Devolution Bill aims to ensure that cities and city regions across England – notably the Northern Powerhouse – gain new powers, as the Mayor of London has in recent years.

In 2011-12, as the Localism Bill moved through Parliament, Future of London surveyed practitioners for perceptions of specific measures and reforms within the localism agenda. The results formed our 2012 publication Localism in London – the implications for planning and economic development. Three years on, we conducted an extensive online and phone survey of a similar group of 40 practitioners to see if views have changed, and how they have translated into practice. For survey questions, see end of post.

Fig 1: Survey Results – a comparison of perceived impact and use in practice of localism reforms in 2015 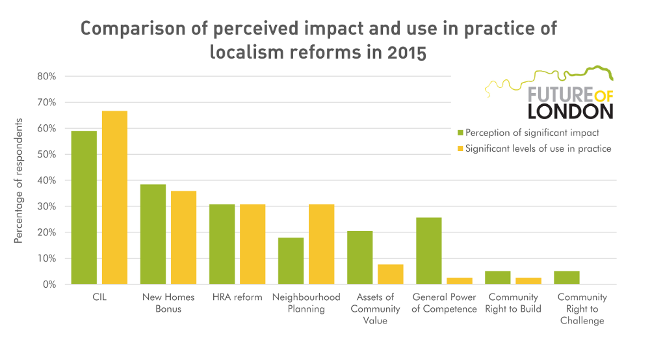 “Localism has opened the door to growth, but austerity has perhaps played a bigger role in why this happened” – Survey respondent

It is unsurprising that, in both 2011 and 2015, direct local revenue generators – the Community Infrastructure Levy (CIL), New Homes Bonus and Housing Revenue Account reform – are rated highest by surveyed practitioners. CIL’s jump in popularity in 2015 could be due in part to the dilution of New Homes Bonus and HRA reform (see policy update for more). In terms of usage, 27 London local authorities now have CIL in place, and all but one of the remainder are consulting on it.

The relative popularity of CIL stems from the opportunity it gives planning authorities to ensure that new developments will have the accompanying infrastructure in place to make them successful, as well as offering flexibility on charging and exemptions to help shape an area. As the money goes into the general fund, it is not clear how effectively funds are being directed; nor whether the two-tariff system of local and Mayoral Crossrail CIL is threatening affordable housing delivery. Survey responses indicate that it could be too early to draw meaningful conclusions, though hopefully the recently announced national CIL review will shed some light on these and other matters.

Although CIL preceded the Localism Act, the Act contained an interesting amendment to CIL: if CIL-paying development falls in an area with an established neighbourhood plan, the neighbourhood forum has decision-making powers over 25% of the proceeds. Assuming that this measure was partly aimed at boosting the number of neighbourhood plans, it hasn’t yet had the desired effect in London, where of the 48 designated forums, only two have plans: Norland, in RB Kensington & Chelsea, and Fortune Green and West Hampstead in LB Camden.
Though in some cases, the lack of a plan may be due to issues within the community group, it seems clear that London practitioners remain sceptical of neighbourhood planning’s overall usefulness. In an era of stretched budgets, officers may find it hard to support the mechanism’s democratic virtues if they do not lead to a product – and a positive impact on their own workload.

Central government is now introducing further regulation to boost the number of neighbourhood plans. The Housing and Planning Bill calls on councils to facilitate the process, and neighbourhood planning was key to the recent Business Improvement District consultation, signalling the government’s determination to push on. Regardless, London remains particularly challenging for community-level planning, because (with one exception) it lacks the parish councils best suited to it, and because the London Plan provides an additional tier of planning to navigate.

Local authorities are now expected to do more with considerably less funding, while building the capacity of their communities to take on a greater municipal role. With the November 2015 autumn statement declaring a 56% reduction in local authority grant over the next four years, both elements are hugely challenging. The General Power of Competence may holds some of the answers through its removal of restrictions on collaboration and commercialism. Survey responses overall suggested a shift in this direction is starting, and as these new ways of working become more critical to service delivery, this power could really start to have an impact on London governance.

Collaboration between local authorities and the GLA is also becoming more crucial to London’s development. In 2011, some practitioners were cautious about how localism was strengthening GLA and Mayoral powers. In 2015, this concern appears to have dissipated: when asked about the biggest challenges to localism, respondents cited increasing pan-London control as by far the smallest challenge, suggesting that boroughs see the strength of the GLA and London LEP as a positive influence on London’s strategic development in these challenging times.

“Neighbourhood planning is … innovative … but has not been carefully thought through, which has led to an unequal spread of detailed … policy that doesn’t provide sufficient support to those more deprived communities who do not have a similar level of engagement with planning.” – Survey respondent

Fig 2: Survey results: perceived challenges to the localism agenda in 2015

The following survey questions were posed, with a 1-10 rating system:

1b. Rate the extent to which you are using the same powers in practice.

4. Rate the following challenges to the localism agenda in 2015: constrained local government finance; lack of capacity within the community; risk aversion in local authorities; difficulty of working across boundaries; broader economic priorities; lack of clarity of agenda; increased pan-London control.