As part of our project looking at the progress of London’s Housing Zones, we’ll be posting profiles of some of the zones to show what’s being done to speed up housing deliver in the Capital and showcase some of the diverse approaches being taken in different areas. To find out more about this project or to get involved, email alexei@futureoflondon.org.uk.

As well as targeting increased housing delivery, Harrow’s housing zone is part of the council’s drive to adopt a more commercial approach to service delivery. The plans showcase Harrow’s desire to make best use of council assets and establish new income streams in the face of reduced funding from central government.

The council’s bid includes plans to move its civic centre to a new, more compact site and use the excess land for housing; to develop purpose-built, council-owned private rented sector (PRS) housing; and to increase density around transport hubs.

The Housing Zone is predicted to help deliver 5,294 homes by 2026 (1,415 directly through HZ funding, the rest indirectly), almost double the 2,800 envisaged in the 2013 Area Action Plan (AAP) and nearly enough to meet the whole borough’s London Plan housing target of 5,927 over the same period. 1,545 homes (29%) will be available below market rates, with a mix of affordable and intermediate housing. Originally designated as an Area for Intensification, Harrow town centre was upgraded to an Opportunity Area in the Further Alterations to the London Plan, indicating greater capacity for new homes and employment.

The Harrow Housing Zone inherits its boundary from the 2013 Heart of Harrow AAP [PDF], which sets out the strategic growth plan for Harrow, Wealdstone, and the Station Road corridor between the two town centres, covering around 177ha and containing most of the borough’s regeneration sites. 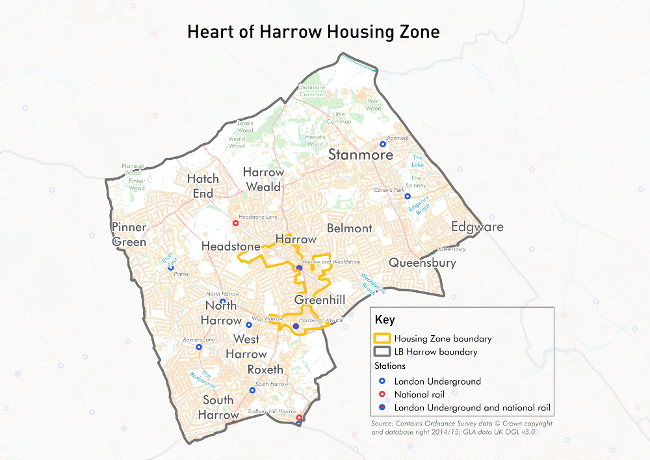 The zone encompasses Harrow-on-the-Hill and Harrow & Wealdstone, two well-connected stations linked by an underperforming linear high street. Most of the zone’s development sites lie along the corridor between the two stations, and good transport accessibility is supporting higher-density development around the stations, most notably at the College Road site. Transport for London has committed to improving accessibility at Harrow-on-the-Hill, and is even bringing forward some of its own land for development as part of its commercial development drive.

Many of the development sites in the Harrow HZ are owned by the council, and it is looking to use these assets to kick-start development and regeneration. Harrow owns a large amount of land in the HZ, including the civic centre, leisure centre and two car parks. Existing uses will be reprovided on more compact sites, freeing up land for housing. As well as providing housing, the civic centre redevelopment is seen as key to the wider regeneration of Wealdstone, one of the most deprived wards in the borough.

The GLA is providing £31.5m to projects within the Harrow zone which includes loans to Hyde of up to £5.4m and Origin of up to £17.5m, and up to £8.8m of recoverable grant to the council to help redevelop the civic centre.

In addition, a change to phasing has been negotiated for Harrow View, where a school has been moved to a later phase so that housing can come forward earlier.

A 2014 graph produced by the council shows how HZ funding will allow housing delivery to occur much sooner. By the council’s estimates, the HZ will have supported the delivery of 1,779 homes by 2018/19, compared with just 325 in the same period without the zone.

Harrow council has adopted a commercialisation strategy which underlines the importance of finding new revenue streams to fund council services in the wake of reduced central government funding.

The borough has already had some success in setting up HB Public Law, a legal services company jointly owned by Harrow and neighbouring LB Barnet. The arrangement means both councils save on costs, while the new company can also generate revenue by providing services to other authorities.

One of the recommendations in Harrow’s 2015-18 Commercialisation Strategy is to establish new income streams through regeneration, and Harrow’s Housing Zone provides opportunities to experiment with other forms of council-owned companies. Recent cabinet reports detail plans for a residential private lettings agency [DOC] and private rented housing [DOC]; and a construction delivery unit is also being explored.

Up to 600 market-rent PRS homes are planned, which the council will retain ownership of to give a stable, long-term income stream. This has been factored into the council’s budget and after paying back initial costs, will play an increasingly important role in council finances.

Under the 20-year regeneration strategy [PDF] approved by the council in December 2014, £1.75bn will be used to renew the two town centres and improve public realm, transport and access. As well as supporting greater housing density, the strategy is expected to generate an extra 3,000 jobs.

The strategy seeks to boost the two town centres within the AAP area by investing in Station Road – the linear high street which links them. Harrow has been allocated £225,000 for work on Station Road through the London Regeneration Fund, which follows a £2.2m investment from the Outer London Fund in Harrow Town Centre.

Harrow council has developed strong links with the GLA, and several staff have been seconded to the borough over the past 6 years from the GLA’s planning and regeneration teams. These appointments, funded by the borough, have enabled sharing of skills and expertise for work which the council does not have internal capacity for. The close relationship allows better understanding between the two organisations, and has included joint work on the 2013 Area Action Plan.