As part of our project looking at the progress of London’s Housing Zones, we’ll be posting profiles of some of the zones to show what’s being done to speed up housing deliver in the Capital and showcase some of the diverse approaches being taken in different areas. To find out more about this project or to get involved, email alexei@futureoflondon.org.uk.

Thamesmead’s two Housing Zones provide an opportunity to kickstart development in one of London’s last major riverside opportunity sites. Between them, London Borough of Bexley and Royal Borough of Greenwich secured more than £70m funding for Thamesmead from the GLA. Both Housing Zones will be developed by Peabody.

Built in the 1960s and ‘70s by the Greater London Council, Thamesmead was famous first for its ambition and later as a byword for failures in post-war planning.

Now with a new major landowner – Peabody – alongside cross-borough support, Housing Zone funding from the GLA, and Crossrail arriving in 2018, there is an opportunity to effectively address aging infrastructure and provide additional housing.

The Housing Zone bid reinforces the respective growth strategies of RB Greenwich and LB Bexley. Taken in tandem, these parallel initiatives will help to establish a coherent economic and place-making context for Harrow Manorway and the first phases of estate renewal at South Thamesmead, and Plumstead/Pettman Crescent.

Home to around 40,000 people, Thamesmead covers more than 800ha, stretching from Plumstead in the west to Belvedere in the east.

Ambitious GLC plans for the area were never fully realised, and while a large amount of public housing was completed, Thamesmead has always lacked decent transport links, shops and services. In 1975, Harrow Manorway – part of the A2041 – was built, slicing Thamesmead from north to south along the Bexley–Greenwich border. Other major roads limit access between neighbourhoods, and large areas occupied by Belmarsh prison and Crossness sewage works create further barriers.

On the other hand, Thamesmead has lots of amenities: to the north is the Thames, and to the south is Metropolitan Open Land and the Green Chain Walk. Throughout the area are five lakes, a number of green open spaces and parks and 7km of canals.

When the GLC was dissolved in 1986, governance of the area was transferred to Thamesmead Town Ltd. which later split into three organisations to manage housing (Gallions), community (Trust Thamesmead) and land (Tilfen Land).

In 2014, Peabody took over all three, bringing housing, community investment and over 100 acres of developable land in Thamesmead under the ownership of a single, well-resourced organisation. The housing association is developing a 30-year plan for housing renewal and new homes in Thamesmead, with the potential to provide up to 14,000 homes. In 2015, parts of the area were designated as Housing Zones, one each in Bexley and Greenwich. 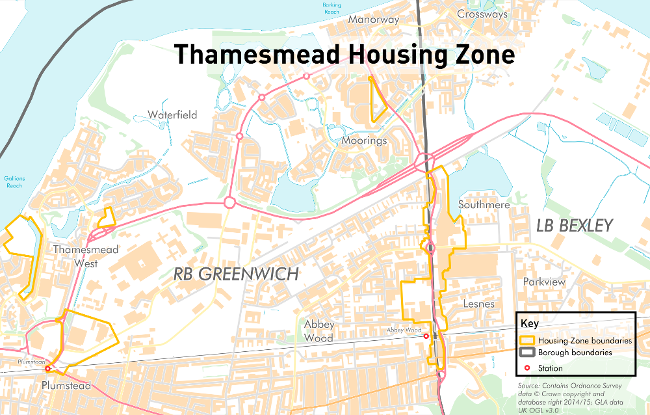 Funding will be provided for 13 sites across the two boroughs, covering a total of 35ha.

In Greenwich, sites in West Thamesmead, Broadwater Dock, Griffin Manor Way and Titmuss Avenue have been allocated up to £23.8m from the GLA towards 1,459 homes, 681 (47%) of which will be available below market rates. The sites include derelict plots and redesignated industrial land.

In Bexley, sites along Harrow Manor Way (Southmere Village, Coralline Walk, Sedgemere Road and Binsey Walk near Abbey Wood station) will receive up to £47.7m to help deliver 1,216 homes, with 591 (48%) below market rates. Some of the sites require demolition of 1960s housing.

Across both zones, over £700m of investment from Peabody will drive delivery.

The Housing Zone funding is a mix of loan and grant to Peabody, which will be responsible for delivering the homes. The funding will allow delivery to start sooner and with more affordable housing. The two councils will share £13m to invest in improved public spaces on Harrow Manorway and around Plumstead station.

In 2009, Bexley and Greenwich adopted a joint supplementary planning document for Thamesmead and Abbey Wood after it was designated an Opportunity Area in the London Plan. More recently, the neighbouring boroughs set up working groups to oversee the design of the new Crossrail station and associated public realm at Abbey Wood and worked together to win GLA regeneration funding (see below) for their respective Housing Zone bids which is administered through joint working groups.

A joint Champions Board has also been set up by the boroughs, including leaders and cabinet members from both councils along with senior representatives from Peabody, GLA and TfL. The board meets quarterly to discuss progress in the two Housing Zones and related cross-borough issues. Separate groups have also been set up to encourage joint working at executive and officer level.

The area around Abbey Wood station is one of the focal points for the HZ funding. Abbey Wood will be the final stop on the south-eastern branch of Crossrail when it opens in late 2018. Crossrail will link Thamesmead to Canary Wharf and central London. Both boroughs have been lobbying for a possible route extension to Gravesend which is currently safeguarded.

Abbey Wood is the main transport link for the area, and the arrival of Crossrail has spurred development activity: in 2015, U+I (formerly Development Securities) built Cross Quarter, an £85m mixed-use development comprising a supermarket, hotel and 216 homes.

As part of Crossrail work at Abbey Wood, a new station is under construction and TfL has allocated £6m for investment in the public realm. Work is underway, and the new station will be completed late 2017.

However, with the station serving a large area, other transport and access improvements are needed, most obviously between housing and transport hubs, but also to open up access to green spaces and the riverside. There is also potential to link Thamesmead to communities on the other side of the Thames. Options being explored include bridges, tunnels and a ferry service

The raised section of Harrow Manorway near Abbey Wood station also presents a challenge to integrated development and regeneration in the area. There are long-term plans to retrofit the road to provide more of a high-street feel; in the short term, this is being supported by the London Regeneration Fund.

Peabody submitted a bid to build a temporary high street using modular units and public realm improvements, and in January 2016 were awarded £1m for the project.

The boroughs had previously won £150,000 from the High Street Fund (matched with £75,000 from each) for public realm and shopfront improvements on Wilton Road next to Abbey Wood station.