On 9th March, Future of London launched its newest initiative, a Diversity Speakers’ Network designed to help better represent the people who deliver and use public services in the Capital, to inject fresh voices into the urban debate, and to connect more London practitioners at all levels.

Over 80 people came to the Foundry in Vauxhall to hear plans for the network and meet cross-sector professionals from disciplines including strategy, planning, transport, architecture, housing delivery, health, resident services and more. If the launch is any indication, the network should be a real success, with great energy at the event and guests reporting dozens of good new connections.

The launch and first months of set-up were kindly supported by Countryside Properties, making its own steady efforts to increase inclusion – Countryside Bid & Marketing Manager Alberta Matin topped off four short talks with her own observations and her company’s diversity goals.

Other speakers included LB Bexley’s Holly Mann, who noted the progress made by women across all sectors and called for sustained momentum; project intern Seth Scafe Smith, who’s coordinating the speaker database and called on the network to “change the norm”; and FoL board director Stephen McDonald, who advised the group – and the sector generally – to see diversity as an asset, with a broader range of input making public programmes more responsive and more likely to succeed. 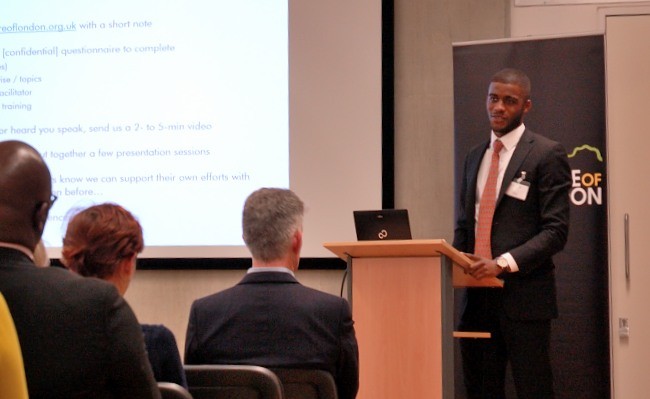 The points raised by these four and FoL director Lisa Taylor were both professional and highly personal, a combination rarely given air time, despite the fact that many people join and stay in the public sector through individual motivations to help others and make places better.

As Scafe Smith put it in his talk, “I got to shadow some exceptionally talented people during my time [interning at Lambeth in 2015]; but in such a testing time the debate cannot be driven by the same few faces. It’s important that talented individuals from all ethnicities, religions and genders are heard because you are there at the core delivering the services we are discussing.

“Speaking with colleagues at Lambeth, I realised they shared this concern. So when Lisa asked if I’d be interested in helping with this project, I enthusiastically agreed. Speaking positions are a great opportunity to put yourself at the forefront of the debate and boost your career, so what better place to start?”

He added, “This is something that people might find a little uncomfortable, but that’s okay, because change isn’t comfortable, and if we are going to try make an impact, we have to be prepared to challenge what we have become comfortable with.”

“This is one of those areas where you just think, ‘let’s stop complaining and do something,’” said FoL director Lisa Taylor. “I would note that while we are promoting speakers from under-represented groups, the network is absolutely open to everyone. We have great support from our board, and it’s critical not to abandon the traditional base because there is vast knowledge there.

“What we want to see is a real mix around the table, as we had at our recent Estate Renewal roundtables. It can be really hard to come up with mixed panels, especially given the pace we all run at, but we have to make this effort – diversity is a huge strength for any city, and is the real future of London.”

On top of events open to all, the speakers’ network itself invites interested professionals from under-represented groups to complete a questionnaire listing area of expertise, topics they can address and speaking experience as well as demographics. People without a known track record are invited to submit a short video, and there is support for those needing help with presentation skills.

Future of London will hold the database, use the network to round out its own events, and make the resource available to other organisations in the sector, while keeping speakers’ details in confidence.

If you’re interested in joining the network as a speaker or just out of interest, or if your organisation is willing to sponsor the effort, we’d love to hear from you.