As part of our project looking at the progress of London’s Housing Zones, we’ll be posting profiles of some of the zones to show what’s being done to speed up housing delivery in the Capital and to showcase some of the diverse approaches being taken in different areas. To find out more about this project or to get involved, email alexei@futureoflondon.org.uk.

Tower Hamlets is London’s largest deliverer of new housing, with a 29% increase in the number of homes over the last 10 years. Despite this, some parts of the borough have remained difficult to develop in. With the borough’s population projected to increase by 26% over the next 10 years, the Poplar Riverside Housing Zone was designated in 2016. The zone covers the east of the borough, where population growth in some wards might reach 50-70%.

Poplar Riverside lies to the north of Canary Wharf, and falls within the Lower Lea Valley Opportunity Area, along with Canning Town, Stratford and the Olympic Park. The Housing Zone is intended to increase housing delivery in a part of the borough with significant infrastructure challenges, and link it to surrounding areas.

The Housing Zone contains 10 development sites which have been split across two phases. In the first phase, 3,034 homes are planned across five sites (448 – or 15% – at below market rates). The GLA has allocated £52m for the first phase (a mixture of grant and loans), which could rise to £78m in the second phase, with the potential for 6-9,000 homes overall. The new homes will be accompanied by measures to increase connectivity between sites and with neighbouring areas. 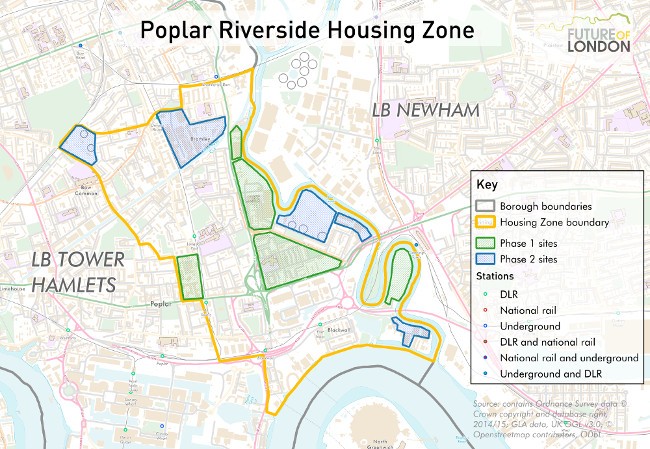 Key sites in phase one include Leamouth North (developed by Ballymore), Gillender Street (Peabody) and Ailsa Street, as well as two estate renewal schemes at Chrisp Street and Aberfeldy Estate (Poplar HARCA). Housing Zone designation has spurred developer interest in Poplar, with additional sites coming forward inside and outside the zone.

To the east, on the boundary with LB Newham, the zone suffers from poor accessibility: one side is contained by the River Lea, while the A12 and A13 fragment the area and present significant barriers to movement. Public transport accessibility levels in the Housing Zone are poor to the north and east, and the Housing Zone package aims to address this. 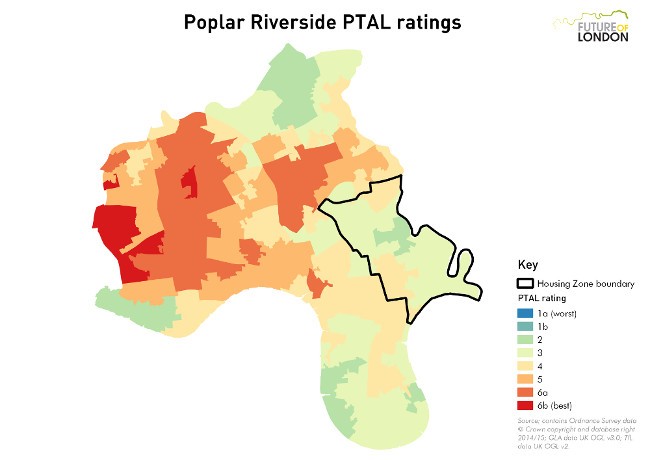 Funding for new access routes will boost the development potential of sites within the zone and ensure that the area can benefit from its proximity to Canning Town and the Olympic Park. Improvements will include footbridges across the Lea, and access routes across the A12 at Gillender Street.

The gasholder sites require remediation before they can be redeveloped, and are expected to come forward in the second phase of development.

In the shorter term, funding has been allocated for land assembly on light-industrial sites, and non-financial support includes redesignation of parts of industrial land for housing.

The Housing Zone encompasses the second most deprived ward in London, East India and Lansbury (Canning Town North, on the opposite side of the Lea, is third). The ward contains two significant estate renewal schemes, both of which will receive support through the Housing Zone.

Housing association Poplar HARCA is leading schemes on two of the Housing Zone sites: at Aberfeldy estate, a £250m, six-phase renewal programme will deliver over 1,000 homes by 2020; at Chrisp Street, around 750 homes are planned. On both schemes, funding has been allocated to support leaseholder buybacks and subsidise affordable housing.

Poplar HARCA is also investing in wider regeneration and social infrastructure, and was awarded £1.8m funding through the London Regeneration Fund to convert 81 unused garages into fashion workshops.