As part of Future of London’s Workspace that Works programme, we are visiting successful SME workspace clusters across London. On 19th April, we visited Dalston, LB Hackney – a summary of the visit is below. 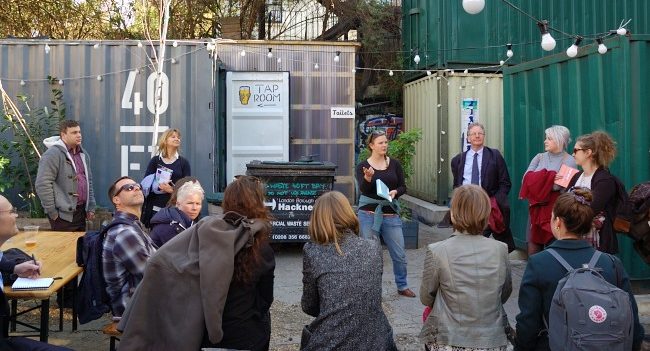 Dalston is one of Hackney’s growth areas, and the council’s 2013 area action plan identifies the cultural and third sector industries as playing a key role in the area’s identity. The Ashwin Street and Gillett Square areas are designated Cultural Quarters. Dalston has excellent transport links since the connection to the London Overground network, but suffers from a lack of open space.

As part of the City Fringe Opportunity Area, Dalston is exempt from office-to-residential conversions, although increased interest and development have pushed up the cost of workspace. Both the AAP and Opportunity Area Planning Framework cite affordable workspace as key to maintaining Dalston’s character and supporting the creative industries.

Cory Defoe, Dalston Town Centre Manager at Hackney Council, outlined Hackney’s approach to securing and protecting workspace in Dalston. Hackney’s development management policy requires any commercial development of over 1000sqm to provide 10% of floorspace as affordable workspace. To help developers find suitable partners to manage this space, the council has put together a workspace provider list with details of experienced operators, both market and affordable. The list is updated annually, and at the time of writing is in its third iteration with information on 17 providers.

HCD is an affordable workspace provider set up in 1982, when it took over council-owned buildings on Bradbury Street on a 100-year lease for peppercorn rent. It is a community interest company controlled by its 300 members, whose profits are reinvested.

Over the years, HCD has expanded its portfolio. At Gillett Square, next to the Bradbury Street workspace, a car park was redeveloped as a public square surrounded by leisure uses and workspace. The redevelopment helped to curb significant anti-social behaviour, and has won several awards.

Dominic Ellison, CEO at HCD, recognises that it is no longer feasible to expect local authorities to let their now much more valuable property at such heavy subsidy, even to social enterprises. HCD is looking at alternative models which allow it to secure property in Hackney without relying on subsidy. At Downham Road, HCD is working with a residential developer to redevelop a site it owns; five market sale flats will subside four floors of affordable workspace which HCD will retain ownership of.

HCD is also set to operate affordable workspace in Textile Building in Hackney Central, a partnership which came about through the council’s workspace provider list.

Cell Projects is an artist-run studio provider, providing affordable workspace for fine artists. Cell currently operate across seven sites, with 900 artists using 175 studios. The studios in Dalston are on Ridley Road, at the end of a large street market, and have recently been refurbished.

Cell leases space from private landlords at a commercial rate, and is able to offer affordable rates to artists by partitioning space (which is cheaper than building custom small units). Early-career artists are able to show work in a gallery space in Bethnal Green, which is funded through rents from studios.

Richard Priestley, Cofounder of Cell, noted that inner London studio provision was under threat from rent hikes, sometimes of up to 350%. This results in studio providers either having to pass costs on to tenants or look for new spaces.

Bootstrap Company was established in 1977 and moved to Ashwin Street, Dalston, in 1980. Over time it has expanded and now occupies several buildings in the Ashwin Street area. Bootstrap provides around 60,000sqft of workspace (a mixture of desks, studios and offices) on leases ranging from two weeks to several years. Currently it has 145 tenants providing 736 jobs, largely in the creative industries.

As well as workspace, Bootstrap includes workshops, a gallery, event spaces, a café and a bar. Sara Turnbull, CEO of Bootstrap, explained that with limited space to expand, Bootstrap has sought to utilise dead spaces around the building: the roof now hosts a bar and event space, a WW2 bunker is a performance space and a former carpark is now a communal space for tenants and home to a baking company and a brewer.

This programme is kindly supported by:

An expanded version of this case study will appear in the final Workspace that Works report, due late 2016.