Hackney Wick and Fish Island (HWFI) have the highest density of artists’ workspace in the UK, and are expected to provide a significant amount of the employment space in the Olympic Park area. Situated along the River Lea and adjacent to the Queen Elizabeth Olympic Park, the areas are in neighbouring boroughs (Hackney and Tower Hamlets), and since 2012, the two areas have fallen under the jurisdiction of the London Legacy Development Corporation (LLDC).

On 27 September, we visited Hackney Wick and Fish Island as part of Future of London’s Workspace that Works programme, which looks at the links between SME workspace provision and regeneration.

After a period of post-industrial decline, in the 1990s HWFI became a home for artists attracted by cheap rents; a 2009 study counted over 600 studios in the area. Post-Olympics, the area has seen heightened development interest, and several speakers noted that the area is becoming unaffordable for artists. 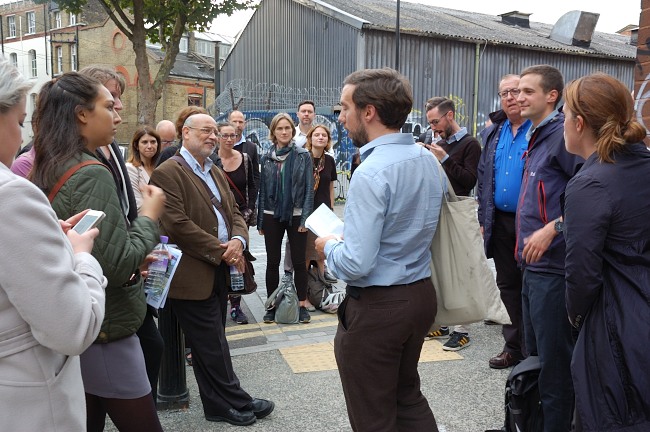 LLDC recognises the need for workspace to be affordable if the current character of HWFI is to be maintained and intends to preserve the amount and types of workspace in the area (including affordable workspace). The SPD includes guidance on workspace typologies, including office, creative and light industrial uses, and previous studies by LLDC have benchmarked workspace costs and typologies.

Visits to The Hive and Arebyte Studios illustrated some of the tensions present in Hackney Wick and Fish Island. The Hive is a meanwhile-use creative workspace, with seven studio spaces and a workshop at ground floor; hotdesking and studio space sublet to Fish Island Labs; an office for a creative agency; and events spaces and a bar. Its future is uncertain as the site is earmarked for housing development – although the recent withdrawal of a planning application may allow more time in the building. Ian Hale, Building Manager at The Hive, noted that uncertainty over the length of their lease made investing in facilities difficult.

At Arebyte gallery and studio space, directors Nimrod Vardi and Hajni Semsei’s flexible approach to providing artists’ workspace has allowed them to constantly reconfigure the space to suit tenants’ needs. They had initially included a hotdesking area, but found that fine artists preferred to have their own space, and so adapted the layout to fit more studios. At a meanwhile site in Clerkenwell, they held an open day for potential tenants to better understand their space requirements, what they could afford to pay, and what skills they can contribute towards maintaining a ‘self-sustaining’ workspace.

The space in Clerkenwell was brokered by Studiomakers, an initiative of art fund Outset set up in 2016 as a response to GLA research suggesting that artists are being pushed out of London by unaffordable studio rents. Yves Blais, Curator of Special Projects at Outset, outlined Studiomakers aim to secure buildings for artists’ workspace which will be held in a trust (similar to a community land trust) and made available at affordable rates in perpetuity. Studiomakers’ aim is to secure 10 buildings in 10 years, the first of which will be in North Woolwich.

In the Olympic Park itself, Here East is a scheme designed by Hawkins\Brown for iCity/Delancy to convert the Olympic broadcast and press centres into new workspace. One speaker noted that the scale of the Olympic Park is analogous to creating a new borough in east London, and that Here East alone will provide more jobs than any other single site in Hackney’s history. 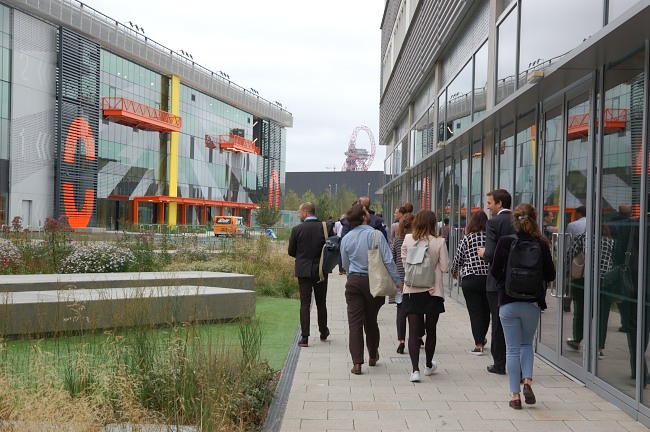 Taking advantage of the power and communications infrastructure installed for the 2012 Olympic Games, Here East will provide space for small businesses in the tech and creative industries, working alongside more established businesses and institutions such as Loughborough University and broadcaster BT Sport. The complex is built around a datacentre, and is intended to cater to businesses which depend on fast and reliable internet infrastructure.

The plans for Here East take inspiration from Hackney Wick’s cultural and creative industries, and aim to provide high-density workspace with a design that encourages cross-pollination of ideas between tenants. A yard in the central area of the complex will be programmed with public events and independent retail. Nick Gaskell, Architect at Hawkins\Brown thought that this model could apply to conversion of other large industrial areas or buildings in London.

Across the River Lea, architects Pollard Thomas Edwards have partnered with developer Groveworld to redevelop a light-industrial complex into a housing-led scheme which will reprovide existing affordable workspace. The former stone merchants and logistics depot is currently let to studio provider Cell Studios on a short lease and has an active community of artists. PTE’s Hamish Kilford-Brown outlined plans for the site: ground floor space will used for artists’ workspace in units ranging from 15–450sfqt, and will be let to the current provider at index-linked affordable rates in perpetuity; the Section 106 agreement with LLDC specifies the maximum chargeable rents to the workspace provider and for tenants. The development, close to the soon-to-be-improved Hackney Wick station, will also open up a new access route to the station and include a gallery and restaurant.