As London’s population climbs towards 10 million, transportation infrastructure must be upgraded and expanded to meet demand. These major infrastructure schemes are about more than moving people around; they present opportunities to unlock new housing, boost employment, facilitate regeneration and contribute to placemaking. Through a panel of speakers and a workshop, the second event in our Priorities for Transport in a Growing London series looked at the major transport infrastructure London’s growing population needs as well as the opportunities and challenges surrounding its delivery. The event, hosted by Arup and supported by Lewis Silkin, is summarised below.

Matthew Yates, Head of Planning Projects at TfL, noted that projected population and economic growth will put pressure on London’s transport services. With a limit to the capacity of existing services and key opportunity areas lacking adequate transport networks – such as the Lee Valley, Thames Gateway and Heathrow – new infrastructure is necessary to support London’s growth. For example, the first phase of Crossrail 2 will unlock development in the Upper Lea Valley; the Bakerloo Line extension will serve regeneration sites along Old Kent Road; and river crossings and a Rotherhithe footbridge will connect east London. Equally important are bus, cycling and walking routes to help deliver the benefits of these schemes to surrounding communities.

Tim Chapman, Director of Infrastructure at Arup, took a historical, long-term view of delivering major infrastructure in London. Expanding public transport in the early twentieth century fuelled the city’s population growth until World War II, and current growth will similarly rely on new large-scale transport infrastructure. However, completing major schemes often takes far longer than political cycles. For example, various forms of Crossrail have been conceived since 1943; the current route gained momentum in 2001, assent in 2008, and will be fully operational by 2020. As London’s economy – integral for the wider UK and even Europe – increasingly relies on commuters from throughout the southeast, new strategies and partnerships may also be needed to address infrastructure needs beyond the GLA boundary.

Paula Hirst, Director of Strategy and Programmes at OPDC, explained how new transport infrastructure at Old Oak and Park Royal – including three new and two upgraded stations – will create a new London neighbourhood with 25,500 homes. Existing assets such as the Grand Union Canal along with new bridges and an improved Wormwood Scrubs will connect Old Oak to surrounding areas. Alongside these opportunities are obstacles such as getting a good mix of housing and other amenities, achieving the right level of housing density and working with multiple landowners. Furthermore, while the next five to 10 years are secure with a pipeline of 10,000 homes, additional financing is needed to stimulate longer-term development 10 to 20 years into the future.

In the second half of the event, participants worked in groups to consider how the first phase of the Bakerloo Line extension – with stations at Old Kent Road, New Cross and Lewisham – could impact southeast London. Groups began by identifying opportunities and benefits in areas such as housing, employment, town centre regeneration and local transport. These included public realm improvements to attract business; creating new employment hubs with high-quality, secure jobs; apprenticeships and further education opportunities; new housing and upgrades for existing housing developments; and better access to public transport alongside improvements to walking and cycling infrastructure. 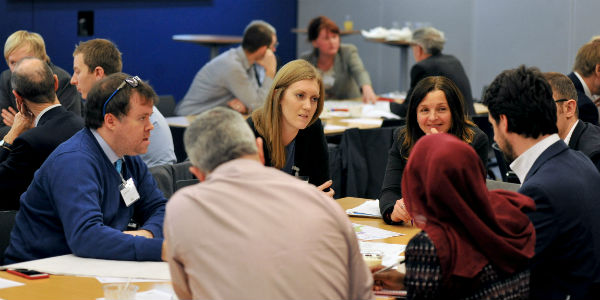 Groups also highlighted a number of challenges to achieving these benefits. Key among these was making sure new development works for both incoming and existing residents and businesses – as well as spreading the benefits throughout communities rather than only improving areas immediately surrounding tube stations. Striking a balance between delivering much-needed homes with creating workspaces and employment opportunities was also a concern, particularly given the potential loss of industrial space along Old Kent Road. In terms of community engagement, achieving buy-in for some aspects such as higher-density housing could be difficult. Finally, securing sufficient financing is an obstacle.

To overcome these challenges, groups suggested several initiatives. For financing, land value capture can capitalise on public assets, while Section 106 and CIL can feed into wider area improvements. Devolution of business rates and even stamp duty could bring in additional income. Local authorities and the GLA have a key role in creating strategies to guide development as well as working with TfL and their delivery partners to involve communities and stakeholders early.