While Tottenham Hale is LB Haringey’s most prominent redevelopment scheme, employment-led regeneration in Wood Green is a key priority for the council. The London Plan identifies Wood Green as an opportunity area capable of creating up to 4,000 jobs and up to 7,000 new homes; for LB Haringey, workspace is an important element in reviving Wood Green as a metropolitan town centre. In November, Future of London visited Wood Green to learn how regeneration plans will impact workspace in the area.

Beth Kay, Head of Regeneration at LB Haringey, described how Station Road will host meanwhile uses for a five-year period thanks to a High Street Fund allocation. Tulip House, a small office building, will be redeveloped to provide workshops and studios with sizes ranging from 4 sqm to 16 sqm at prices between £235-760 per month, including business rates and services charges. The adjacent former car park will offer ‘micro-makerspaces’ and a double decker bus-turned-café. Operated by Meanwhile Space, Tulip House spaces will be available from February 2017 with the car park redevelopment scheduled to open in April 2017.

Another of Station Road’s schemes, the Green Rooms Art Hotel is owned by LB Haringey and operated by MillCo. Director Nick Hartwright explained that the Green Rooms Art Hotel provides 80 beds aimed at – but not exclusive to – travellers in working in the arts and creative industries. Advertising through arts organisations generates several bookings from this target demographic. The building also contains open rehearsal space, a bar/café and a restaurant offering residencies. Up and coming restauranteurs take the space rent-free for six months and receive business support from established professionals, with the aim of moving on to open their own spaces afterwards.

The Wood Green Cultural Quarter along Coburg Road is home to numerous arts and creative organisations, several of which are based in the Chocolate Factory. Workspace Group owns and co-manages this and several other buildings in the area. Head of Planning Ian Dubber explained that Workspace Group’s buildings currently provide 350 to 400 jobs on site. Rents vary depending on the unit type, fit-out and demand. Leases, usually covering a two or three year period, offer flexibility to move up or down in size as needed. The Cultural Quarter is expected to add over 9,000 sqm of commercial floorspace in coming years, strengthening the area’s business and cultural offering. 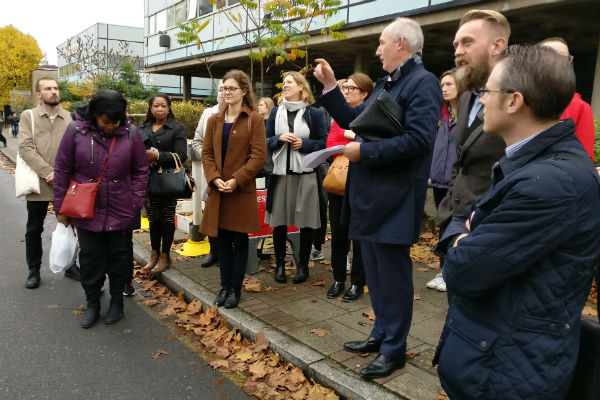 Immediately south of the Cultural Quarter, LB Haringey has designated the former Clarendon Gasworks for mixed-use development. St William, a joint venture between National Grid (the landowner) and Berkeley Homes, received outline planning permission in 2012 for a scheme that will provide 2,500 sqm of commercial space and 1,050 homes. Ashley Spearing, Development Director at St William, explained that 35% of housing will be affordable and they are now looking at ways to include affordable workspace within the commercial offering.

Underlying all of these regeneration schemes for Wood Green is a desire for public realm improvements, particularly between Wood Green and Alexandra Palace. The two areas are bisected by railway lines with limited and poorly-signposted crossing points. Redevelopment in the Cultural Quarter aims to improve connectivity between the two, while LB Haringey hopes to build the retail and creative offer along Station Road in order to capitalise on increased footfall during events at Alexandra Palace. For the Heartlands development, there is scope to redesign traffic-dominated Mary Neuer Road, add a green link to Alexandra Park and create new links to nearby tube stations.