This month’s Spotlight is a guest blog from Geeta Nanda – CEO at Thames Valley Housing, as first appeared in Inside Housing. 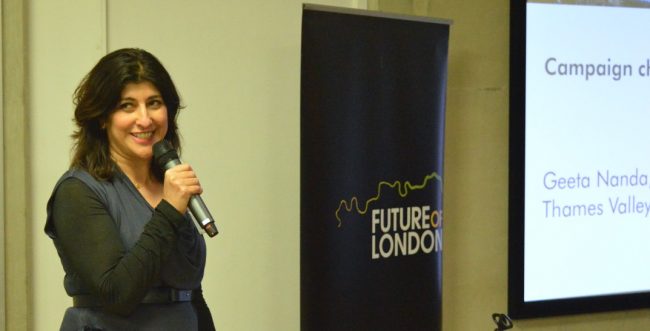 Opening the papers recently, I read about Eileen Burbridge – one of the most high-profile business women investing in tech companies – who was regularly assumed to be one of the office assistants, not the boss.

Despite the fact that technology is here to open up data and create new businesses not based on the formal corridors of power, the place of women within the tech industry is dismal.

Today we mark International Women’s Day, a day to acknowledge and celebrate the achievements of women around the world. But beyond the celebrations, there’s also a fight on  our hands to address gender disparity in the workplace. The #BeBoldforChange campaign is about pledging to take specific actions to address those problems.

These issues affect women at every stage of their careers. For instance, women occupy just 36% of leadership roles in the workplace, with only seven female bosses in the FTSE 100. Female graduates also earn 20% less than their male counterparts.

The UK has a less than stellar record on gender parity – in 2016 it was ranked 20th in the World Economic Forum’s Global Gender Gap Index, which measures national gender gaps on economic, political, educational and health criteria.

So what’s the picture in housing? Property in particular has long had a reputation for being a boys’ club, and looking at gender issues within the industry is still sobering. Women make up only 15% of the property and construction industry – dismal considering women account for 43% of the UK’s workforce.

The story does not get any better when looking at women’s salaries. We earn on average £11,113 less than our male colleagues. Combine that with the fact there are 14 female leaders out of the 50 largest housing associations, and it’s clear there’s a problem.

This message hasn’t got everywhere though. The Northern Powerhouse conference in Manchester a few weeks ago hit headlines when their speaker list was published, with just 13 out of the 98 speakers at the two-day event being women. Moreover, none of them made the event’s promotional material.

Female role models in positions of seniority an
d demonstrating their specialist knowledge are essential to ensure the diversity of the sector in future. The conference organisers apologised publicly and promptly, but there were still protesters staging a self-titled ‘Lass War’ outside the venue, letting those in charge know how they felt about the mistake. Public sector leaders in the North, including Andy Burnham MP and Jo Miller, chief executive of Doncaster Council, also spoke out to admonish the organisers.

To avoid things like this happening again, more initiatives like Future of London’s speaker diversity pledge –#DiversityPledgeLDN – are needed and are  certainly a way forward to make a tangible difference.

Sparked by the mayor of London and having run for six months, the project is encouraging businesses to promote and support under-represented groups to speak on panels and at events, and asking senior staff not to accept invitations to speak at or attend events that don’t reflect the diversity of our capital.

The direct action here enables everyone to think beyond what they do automatically and look within their organisations for talent that can be developed. It is boring for everyone to have already-established all-male panels repeatedly churned out. The panellists find it hard to say anything new and the audience finds it hard to listen. It is easy to sign up and make a difference.

As people who not only provide homes but also invest in communities, it’s not just about the workplace. What about our residents and the issues they face? At Thames Valley Housing, we’re running women-only events in some of our most ethnically diverse neighbourhoods. These events provide a safe space where women can talk to each other, as well as access support from health professionals, counsellors and nutritionists in ways they may not be able to at other times.

When I started as CEO of Thames Valley Housing, I remember one of my first meetings with a developer. As I walked into the room one of the visitors who worked for them turned to me and asked for a cup of tea with two sugars. He was mighty embarrassed as we sat down to business.

While we hoped those days had gone, clearly in some industries they have not. International Women’s Day is not just a day to reflect on all the great stuff that has been achieved but for us all to think about what we can do to tackle bias, stereotypes and create the right environment both at work and for our residents. So let’s raise the bar to be bold and even the odds.